Ashish Sinha, 50, professor of earth sciences at the California State University in the US, studying calcite deposits in a cave in Uttarakhand. His team gleaned 5,700-year rainfall data using these deposits, revealing prolonged droughts that ended Indus, Vedic eras.

Climate changes contributed to the rise as well as the fall of India’s two ancient societies, the Indus Valley civilisation and the Vedic civilisation that followed, according to new research published in the journal Science Advances.

The new study is not the first study to identify climate change as the reason for the fall of the Harappan civilisation (see this December 2013 study and this March 2012 study). But it is the first study to reconstruct Indian monsoon precipitation patterns over the last 5,700 years, by studying calcite deposits--crystalline deposits usually composed of calcium carbonate dissolved from the surrounding limestone by groundwater--in a cave in Uttarakhand.

The records revealed a correlation between weak summer monsoons and the periods over which the Indus and Vedic civilisations are known to have disintegrated. Both civilisations prospered during climatically stable intervals and disintegrated during years of drought.

“If ancient societies could not cope with the variations we noted in the Indian summer monsoon, which were far more severe than anything we have seen in the recorded rainfall records of the twentieth century, what makes us believe that modern civilisation will be able to cope with the next potentially prolonged downturn of the Indian summer monsoon without adequately planning for it--especially in the face of other climatic challenges such as global warming, rising ocean temperatures and so on?” Ashish Sinha, 50, professor of earth sciences at the California State University in the US, told IndiaSpend over a phone conversation from China where the study was conducted.

“I didn’t really like the monsoon season when I grew up in India, with all that chaos and the inconvenience,” said Sinha, co-author of the study. Later, he learned to appreciate how the monsoon is entwined with Indian life and is the lifeline of what is still a largely agrarian Indian economy, which provides livelihood to 228.3 million or 48.8% of Indians.

Today, Sinha imparts his expertise on the Indian summer monsoon to younger researchers, such as the study’s first author Gayatri Kathayat, 31, a post-doctoral scholar at the Institute of Global Environmental Change, Xi’an Jiaotong University, Xi’an, China.

Kathayat’s passion for cave research, a traditionally male-dominated field, has led her to explore some of India’s most dangerous caves in order to collect speleothems--as the calcite deposits made from calcium carbonate dissolved from the surrounding limestone by groundwater are called--including those used in this research, and to analyse them as part of her doctoral dissertation in China under the guidance of professor Hai Cheng, a leading global authority in paleoclimate research. 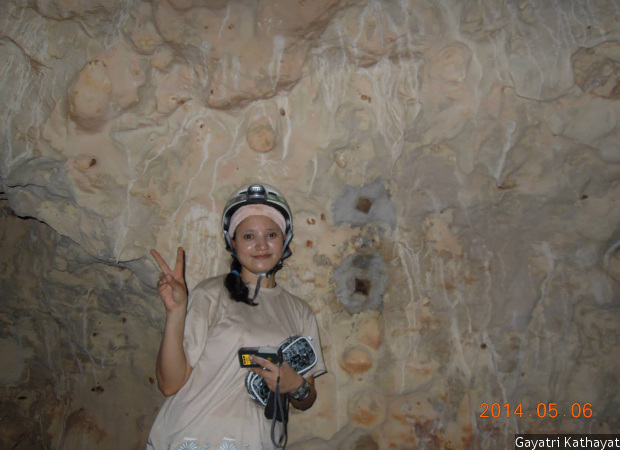 Gayatri Kathayat, 31, a post-doctoral scholar at the Xi’an Jiaotong University, China. Kathayat’s passion for cave research, a traditionally male-dominated field, has led her to explore some of India’s most dangerous caves in order to collect speleothems and to analyse them as part of her doctoral dissertation in China.

Kathayat and Sinha tell IndiaSpend why it is important to study the variability of the Indian summer monsoon over the last few thousand years.

Links between the Indian summer monsoon variability and historic regional events have been challenging to derive, mainly due to a lack of accurate climate records. To bridge this gap, you studied oxygen isotopes--oxygen variants differing in their number of neutrons--in calcite deposits (speleothems) of the Sahiya Cave in Uttarakhand to generate a reliable record of the variability of the Indian summer monsoon over the last 5,700 years. What makes the stalagmite profiles of the Sahiya Cave an accurate indicator of the climate model of the sub-continent, and hence, an accurate base to predict future climate change?

GK: The Sahiya Cave is located in Uttarakhand, about 200 km north of Delhi, roughly 1,190 m above sea level. The area lies between the Gangetic Plains and the Lesser Himalayas, at the fringe of the Indian summer monsoon-influenced region. I say fringe because in most years this is how far the monsoon rain from the Bay of Bengal branch can penetrate north and northwest India. The monsoon system weakens as it makes its way across the Gangetic Plain, such that northwest India is the most arid part of the country and drought-prone. This basic pattern of the Indian summer monsoon has stayed the same over the last 5,700 years. The variability in the monsoon is expressed most strongly at its western limit, meaning that any weakening of the system will impact the fringe areas most. So the Sahiya Cave is situated in a very sensitive region, climatically speaking. The speleothems, or mineral deposits within the cave, are formed from groundwater, so in a broad sense, yes, the variability of rainfall would influence their growth. However, more deeply, we studied the changes in the chemistry of speleothems (technically, the ratio of heavy to light isotopes of oxygen) to determine how their growth has been impacted by variations in the monsoon rainfall. This is what makes us confident of the Indian summer monsoon precipitation record of the last 5,700 years based on the speleothems of the Sahiya Cave. 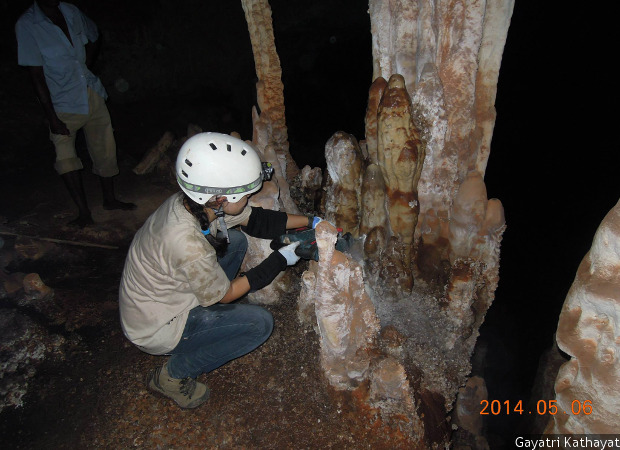 Gayatri Kathayat at the Sahiya Cave in Uttarakhand, about 200 km north of Delhi, roughly 1,190 m above sea level.

Your data set representing the variability of the Indian summer monsoon over the last 5,700 years shows a positive correlation with the expansion and disintegration of successive human civilisations in the Indian subcontinent. Can you quickly take us through the timeline and summarise your findings?

GK: Sure, let’s start with the earliest period, between 4,550 years before present (BP) and 3,850 years BP, a fairly wet and warm, climatically stable interval facilitated the expansion of the agrarian communities of the early Indus Valley civilisation into large urban centres marking the civilisation’s mature phase. During an ensuing prolonged dry spell, these sites were abandoned as communities relocated to the eastern precincts of the Indo-Gangetic plain, a region enjoying a heavier monsoon.

A similar story played out (later) starting 3,400 years BP, when a strong Indian summer monsoon encouraged the influx of Indo-Aryans into the north Indus valley, marking the beginning of the Vedic civilisation. A weak Indian summer monsoon event around 3,100 years BP caused these communities to shift eastward. A revival in the monsoon sustained this society for another 600 years through to 2,450 years BP, when the monsoon abruptly weakened, causing the society to disintegrate into disparate political units, the predecessors of large kingdoms of the Mahajanapadas period.

To turn to more recent history, the speleothem oxygen isotope record of the Sahiya Cave shows a failure of the monsoon around 1,620 AD, a time coinciding with the downfall of the Guge kingdom in western Tibet.

While we acknowledge that local and regional anthropogenic factors must also have contributed to past societal changes, previous research has also implicated disease and socio-political factors in the disintegration of the Indus Valley and Vedic civilisations, the correlation between the fortunes of those societies and the variability in the Indian summer monsoon is indisputable. We invite archaeologists and anthropologists to study this tangible link between climate change and societal change to confirm our analysis. 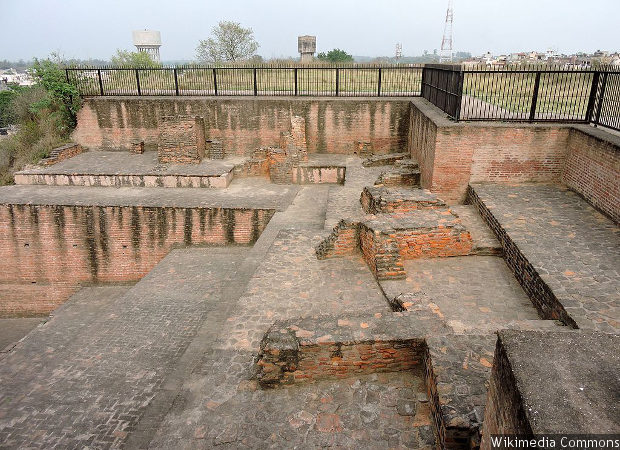 AS: Well, if you go by the actual Indian summer monsoon rainfall data that scientists have access to, it spans, at most, about 100 to 150 years. If you think of this period in the sense of the time that has elapsed since the Indus Valley civilisation, it can show us but a brief snapshot of monsoon variability. This snapshot of the Indian summer monsoon in the twentieth century shows at most, two to three years of successive drought. The data set of the last 5,700 years we have generated suggests that the Indian summer monsoon expresses a cyclical centennial-scale pattern, varying from strong intervals of good rainfall to weak intervals lasting much longer than the 2-3 years of successive drought we know of, likely in response to summer temperatures in the northern hemisphere and the meltwater discharges of rivers flowing from the Himalayas.

This is important in the light of global warming, rising ocean temperatures and the fluctuation in the monsoon India has seen in the last 10-15 years, especially if you consider that civilisation is now spread across the region where the Indus Valley civilisation flourished as well as in regions to the east of that area, where we found that populations migrated during the intervals when the monsoon system weakened. On the one hand, you have the established cyclical pattern of the monsoon and on the other hand, you have all these other climatic changes that are expressing. What would be the outcome of superimposing the data set representing the cyclical pattern of the Indian summer monsoon with the data set expressing the influence of recent climatic changes? This is something to study deeply and possibly to use as a base for agricultural policy. India is, after all, still an agrarian economy.

Does your study tell us anything new about the impact of climate change on the Indus Valley civilisation, at a time when climatic changes were most likely causing the downfall of other Bronze Age civilisations such as the Egyptian civilisation and the Mesopotamian civilisation?

AS: Previous studies have attributed both the societal collapses in the Middle East and in the Indus Valley to a climate event, the so-called “4.2 kiloyear (ka, a unit of time equal to 1000 years) BP event”, a period of prolonged drought. Our study, that is, the Sahiya Cave record, shows that the 4.2 ka BP event did not play out as a singular prominent abrupt event in the Indian subcontinent but rather as an interval of declining Indian summer monsoon strength. An abrupt event would have lasted less than a decade and caused widespread societal disruption. Essentially, the Indus Valley was not as severely impacted by the climatic episode that led to the downfall of the Old Kingdom in Egypt and the Akkadian Empire in Mesopotamia.