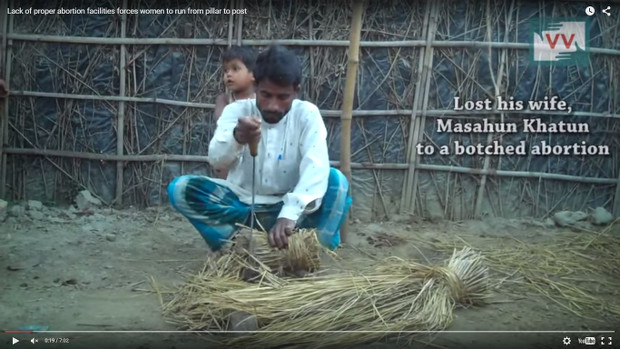 Rafiq Khatun, a daily wage labourer from Phulvari Sharif in eastern Bihar, lost his wife Masahun in a botched abortion.

Last year, in eastern Bihar's Phulvari Sharif, 24-year-old Masahun Khatun was five months pregnant when she fell in the front yard of her house. For the next three weeks, Masahun and her husband shuttled between government hospitals and private practitioners, spending over Rs 40,000 on healthcare, as they tried to get an abortion. Masahun did not survive and her husband, a daily-wage labourer, is struggling to raise their four kids. This is their story:

Almost a decade after the government launched the Janani Suraksha Yojana (JSY; Mothers’ Protection Programme) to reduce maternal and infant mortality by promoting institutional delivery, too many Indian mothers die of causes related to childbirth.

India's MMR, or maternal mortality ratio (number of maternal deaths per 100,000 live child births), was 178 in 2010-12, worse than poorer countries such as Myanmar and Nepal, and about the same as Laos and Papua New Guinea, according to WHO data. As many as 50,000 pregnant women die every year in India during childbirth, according to this UN report.

How the public healthcare system fails the poorest Indians

Three video stories by Video Volunteers (a global initiative that provides disadvantaged communities with story and data-gathering skills) reveal how difficult child birth is for the poor who have to depend on public-health services, and end up spending money that, in most cases, they do not have:

The JSY gives pregnant women--who deliver babies at home and live below the poverty line--Rs 500 as cash assistance, irrespective of the mother's age and number of children, to give birth in a government or accredited private health facility.

The promise of direct transfers

A direct transfer of JSY benefits to the bank accounts of pregnant women started in 2013 and is now underway in 121 of 640 Indian districts.

About 900,000 ASHAs get performance-based incentives to motivate pregnant women to give birth in health facilities. Of 10.4 million JSY beneficiaries in 2014-15, a large majority (nearly 87%) live in rural India.

As many as 60% of women in Uttar Pradesh acknowledged paying money from their own pockets for certain services, according to an assessment of JSY conducted by United Nations Population Fund in Bihar, MP, Odisha, Rajasthan and Uttar Pradesh in 2012.

Average amount paid as other charges (in Rs)

Households spent an average of Rs 5,544 per childbirth in rural areas, according to a recent survey by the statistics ministry.