Why Malnutrition Remains A Challenge For India 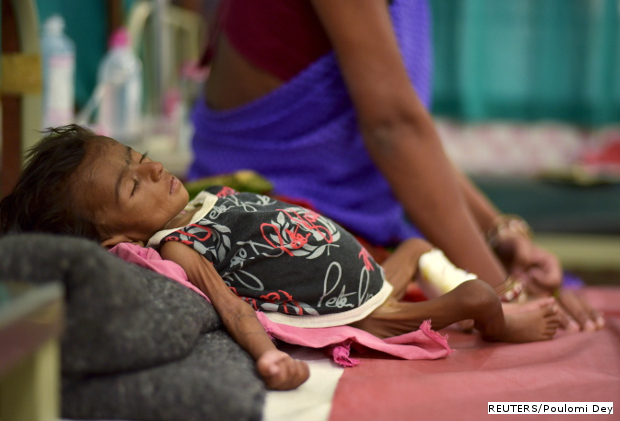 These are some of the findings of the Rapid Survey of Children (RSOC 2013-14) conducted by United Nations Children's Fund (UNICEF). While the full report is yet to be made official by the Indian government, The Economist carried extracts from the report.

Source: RSOC and WHO

The percentage of underweight Indian children under the age of five is down to 29.4%, according to RSOC data, from 43.5% recorded by the National Family Health Survey, 2005-06.

India’s ranking among neighbouring countries has improved, and it is now next to Nepal, which is marginally better off with 29.1% of children under the age of five underweight.

When compared to other members of BRICS (Brazil, Russia, China and South Africa), the number of underweight children under the age of five remains dismal, compared to Brazil (2.2%), South Africa (8.7%) and China (3.4%).

The urban-rural differential continues to be high in all three categories. Rural areas are still doing worse than urban areas in almost every category.

This could be because most public-health efforts are concentrated in rural areas.

Girls are discriminated against, but they do better

Despite systemic and systematic discrimination, girls appear to benefit from better nutrition than boys. While 39.5% of boys under the age of five are stunted, only 37.5% of girls are stunted, according to RSOC.

The same is true for underweight children: 30% of boys and 28.7% of girls are underweight.

Scheduled castes have the highest percentage of stunted children, 42.4%, followed by scheduled tribes at 42.3%.

Open defecation is strongly related to malnutrition among young children. Young children in households that use improved toilet facilities are less likely to be stunted, wasted and underweight. The number of people practising open defecation has come down from 55% to 44.8%, an improvement of 10%.

Uttar Pradesh, Bihar and Jharkhand barely show any improvement. Chhattisgarh and Gujarat, however, reported improvement of 9% and 8%, respectively.

Odisha has seen an improvement of 5%, followed by Tamil Nadu. Andhra Pradesh has seen an increase of 5% in wasted children.

All the worst five states have seen a decline in underweight children.

The highest decline in percentage of underweight children was seen in Madhya Pradesh, with almost 21%, followed by Bihar with 17%.

(Salve is a policy analyst and Wadekar is an intern at IndiaSpend.)