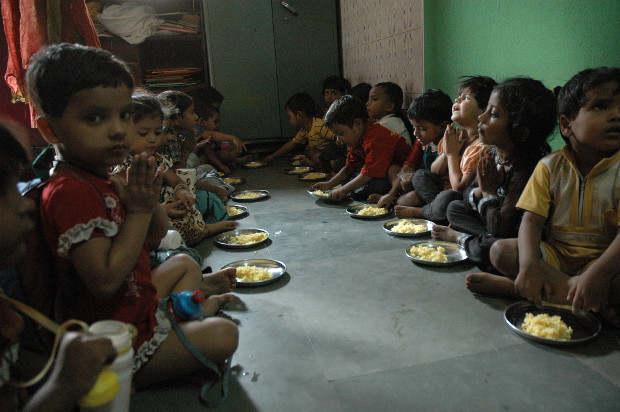 Children having lunch at a malnutrition treatment centre in a Mumbai slum. Image: Dilnaz Boga

Saleema Habib, 33, stares vacantly ahead as the local social worker Zahira Shaikh jots down the details of how her three-month-old infant died. The baby had not been keeping well for two weeks and had died of diarrhoea, she said.

"Many deaths are attributed to pneumonia, TB and diarrhoea instead of malnutrition in these areas, so we have to be extra cautious and get more details," said Shaikh, as she wandered through Govandi, a sprawling, congested slum, home to 60,000 impoverished people, mostly migrants, on the eastern periphery of India's financial capital.

Govandi is a microcosm of urban India’s burgeoning challenges of poverty, overcrowding and malnutrition, with many like Shaikh’s daughter slipping between a variety of policy and implementation cracks.

Govandi’s people are among 24 million people in Mumbai and New Delhi living in urban slums, or roughly half the population of India’s two mega cities. These two cities account for more than a fourth of 95 million Indians in urban areas living in poverty, according to various studies—and, so, at risk of malnutrition.

In Delhi, half the city’s two million children are already stunted from malnutrition, which a recent Scroll story called “a hidden epidemic”.

Hidden and under-reported, malnutrition among so many will be difficult to record and—as current evidence indicates—not amenable to easy solutions.

Three years ago, reports of infants dying from malnutrition in Govandi attracted much publicity and government action. Health workers and doctors were deployed and in an urgent bid to tackle the crisis, a malnutrition-treatment centre was set up.

A year after it opened, the centre was shut down. The reason cited by Apnalaya, an NGO that ran the centre: “insufficient outcome of the effort”. 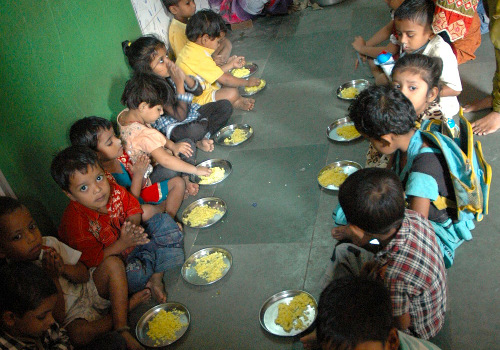 Children at the centre before it was shut down. Image: Dilnaz Boga

The three-year programme was "very costly but failed to yield results", said Dnyaneshwar Tarwade, spokesperson for Apnalaya. “Basically, we had spent Rs 5 lakh over three years on 35 children and we saw no results.”

Apnalaya catered to 8,000 children in Govandi.

An internal assessment by the NGO revealed that this was because by treating malnutrition at the centre only, parents and the community--vital stakeholders--remained uninvolved.

About 1 million children under the age of five die of malnutrition-related causes in India, according to UNICEF. From the arid lands of Rajasthan to the urban slums of Mumbai, the government has not been able to reduce what are some of the highest malnutrition figures in the world.

Some dispute India's malnutrition data, contending that the last time nationwide infant-health figures were released was 2006, and a limited survey later indicated a fall in malnutrition.

Yet, this correspondent's tours to many parts of India indicate that malnutrition, associated with poverty but not exclusive to the poor, is a continuing issue in rural and urban India. This piece focuses on urban malnutrition.

In urban families, who may not be officially poor but do not have access to nutritious food—either through ignorance, changing food habits and time pressure—the problem is especially evident, as the continuing malnutrition in Mumbai's slums indicates.

The food-security status of 377 million inhabitants of India’s urban areas, of which one-fourth live in extreme poverty, is poorly documented, as the case of Mumbai indicates.

One in six, or 60% of Mumbai’s population lives in slums, and some 10 million live under threat of constant displacement. For these millions whose work days are often marked by long commutes, long hours and intense physical activity, food is low on the daily priority list.

Packaged food--popularly called junk food for its low-nutrition qualities--said social workers and experts, has started infiltrating homes of even lower-income and marginalised groups.

Junk food is unhealthy for the digestive system as it slows down the digestion process, bloating the stomach. In addition, when the intestine absorbs the food, it requires fibre and water to excrete but junk food lacks these nutrients.This leads to poor digestion and irritable bowels.

The outcome is malnutrition.

A troubling outcome of growth—and an imperilling factor.

Malnutrition can lead to a permanent reduction of a child’s future learning capacity and negatively impact the economy, experts warned.

An important factor for growing malnutrition in urban areas is the lack of planning and policies for the marginalised. In Mumbai, the city's development plan ghetto-ises people, leading to a cycle of denial of housing, amenities, schools, open spaces and health care.

As much as 60% of Mumbai's slum population lives on 8% of the land, according to a study by the NGO YUVA.

Maharashtra's urban population, which stood at 41% in 2001, has risen to 45% in 2011, but the migrants and homeless were not taken into account by planners, said Dr Ashok Dyalchand, founder and director of the Institute for Health Management in Pachod, in Aurangabad, Maharashtra.

“The planners have not included the outcome of the decadal growth of the population in the urban or the rural sectors,” said Dyalchand.

The difficult task of reworking strategies in Govandi

When the malnutrition effort failed in Govandi, those at work realised community leaders and residents needed to be involved for the health of children in the area's 12 slums.

A community leader was put in charge of the health of local children. “We also decided to train mothers, who are daily wage earners or garbage collectors, on how to make the children’s meal more nutritious, as opposed to spending Rs 5 or Rs 6 on junk food," said Apnalaya's Tarwade. "We encouraged them to feed [their children] what they can cook at home.”

In Dharavi, one of Asia's largest slums and home to a million people, malnourished children were fed cups of a nutritious paste evolved by the local government's Lokmanya Tilak Municipal General Hospital. "[The children have] made a remarkable recovery since 2011," said Tarwade.

Apnalaya is now considering tying up with the hospital for the Govandi slum project. Some nutrition experts doubt the efficacy of micronutrients.

“Micronutrient fortification of our food will create a nutritional mess, and the body will face a new range of burdens and problems,” warns Dr Veena Shatrugna, former deputy director, National Institute of Nutrition, Hyderabad. “It will stem any attempts to improve diets of children, both qualitatively and quantitatively.”

In addition, studies now establish the role that lack of sanitation plays in stunting. This seminal 2013 research paper proposed that open defecation explained why Indian children were shorter and frailer than their counterparts elsewhere. This means the malnutrition crisis is as much a failure of governance and urban planning as it is a crisis of food and poverty.

Unless the state shores up basic amenities, urban malnutrition will persist and grow, as millions continue to stream into Indian cities. ¦

(Boga is a Mumbai-based journalist and researcher.)

Also read this IndiaSpend story on the growing number of under-nourished Indians.