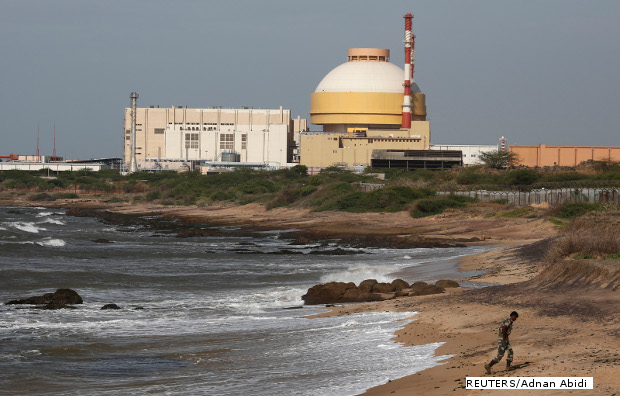 With Prime Minister Modi setting an ambitious goal of tripling nuclear power over the next decade, an analysis by IndiaSpend reveals that India’s nuclear-power sector is in the best shape it has ever been to deliver that target.

India is on course to double its nuclear power generation capacity to more than 10,000 mega watts (MW) over the next five years (see first table).

The first of the new reactors under construction, the brand-new 1,000-MW power plant at Kudankulam, Tamil Nadu, started commercial operations on December 31, 2014, while other projects are in the pipeline.

The ongoing surge in nuclear power is a direct payoff of the India-US Civil Nuclear Agreement.

The most publicised aspect of this deal is the four power plants that India hopes to build with foreign collaboration.

Progress has been slow, leading some observers to write off the deal.

The nuclear deal has already delivered clear, tangible gains for India, and will continue to do so in the coming years.

Nuclear power plants account for 3.5% of India’s current electricity generation, and its share in India’s future electricity generation will be less than 10% even if the installed capacity is tripled. However, along with other sources of energy such as hydropower and solar-power, it will play a role in reducing India’s reliance on coal for generating electricity.

While progress on power reactors with foreign collaboration has been slow, India’s indigenous reactor program is going along just fine.

Four of the reactors are under construction: two each at Kakrapar and RAPP (Rajasthan) are indigenously designed 700 mw reactors. Work on another pair is expected to start in mid-2015 in Haryana, and six more are planned at three sites (see table below). These indigenously designed reactors appear set to be the workhorses of Indian nuclear program.

India has been able to move ahead with these reactors because, unlike the past, fuel availability is no longer a problem.

Before 2008, India’s nuclear power reactors operated at 50% capacity because India did not produce sufficient uranium to run these reactors at full steam. As a non-signatory to the nuclear non-proliferation treaty, India was also locked out of the international nuclear marketplace and could not import fuel.

All this changed after the Indo-US nuclear deal. India has since imported uranium from Kazakhstan, Russia and France and is exploring similar agreements with other suppliers, such as Australia.

With more fuel available, capacity utilisation of nuclear power plants has improved from 50% in 2008-09 to more than 80% now (see table below).

The cost of imported fuel for running these reactors is Rs 330 crore per annum. The low cost of fuel is one of the reasons nuclear power is cheaper than other fuels, such as coal or natural gas.

Compared to power plants using fossil fuels, such as coal or gas, nuclear power has high initial costs. However, fuel cost is a minor expense during the plant’s life, leading to lower lifetime costs for nuclear power compared to either coal or gas.

Nuclear Power Corporation in India (NPCIL) supplies electricity at a lower cost per unit compared to any other energy utility in the public or private sector. Given India’s status as a major importer of petroleum, natural gas and coal, this could be one way of keeping energy costs in check.