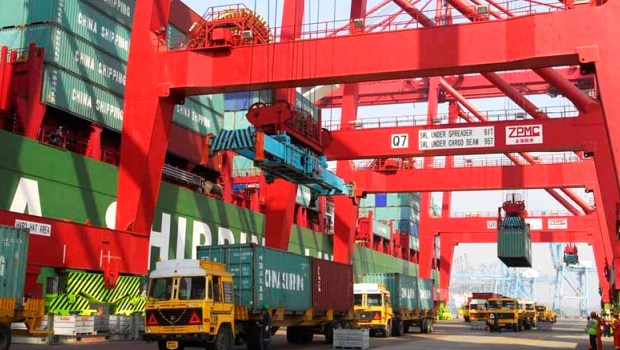 In his latest Budget Speech on 28th February 2013, Finance Minister P Chidambaram expressed concern over India’s Current Account Deficit (CAD), saying “CAD continues to be high mainly because of our excessive dependence on oil imports, the high volume of coal imports, our passion for gold, and the slowdown in exports. This year, and perhaps next year too, we have to find over $75 billion to finance the CAD.”

India’s CAD story is well known and reflects an overall failure to curb imports and boost exports. This leaves India dependent on foreign capital to fund the current account. It also exposes the vulnerability of India’s overall balance of payment (BoP) in a scenario of sudden exit of foreign capital as was seen in FY09 and FY12 – the only two instances in the past 12 years when India clocked a fall in BoP and had to draw down on its foreign exchange reserves. As a result, India’s foreign exchange reserves peaked in FY08 and have stagnated ever since. 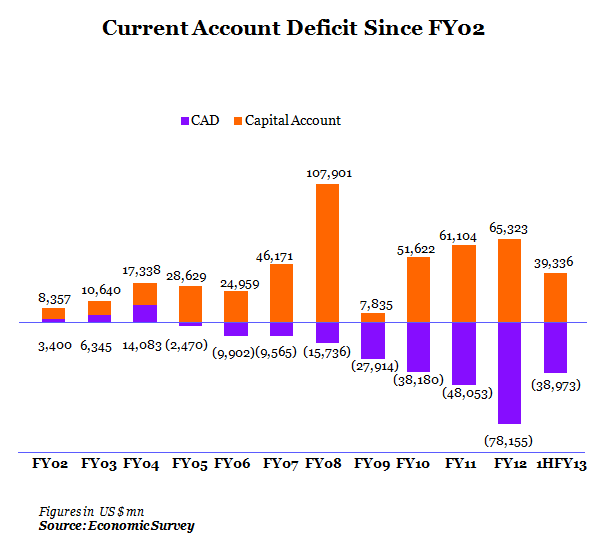 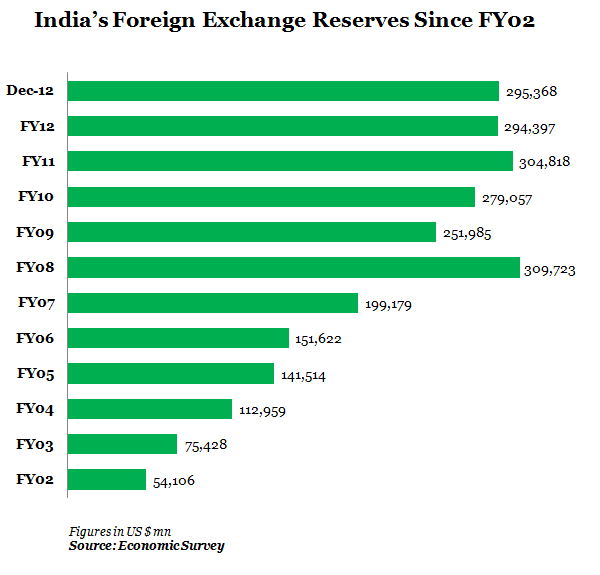 Indeed, a high CAD is undesirable and impacts India’s currency negatively. While the fall in currency should make India’s exports cheaper, the global slowdown has hit exports harder even as imports have remained relatively sticky.

On breaking down the composition of India’s imports over the past 10 years, a few trends are noticeable. 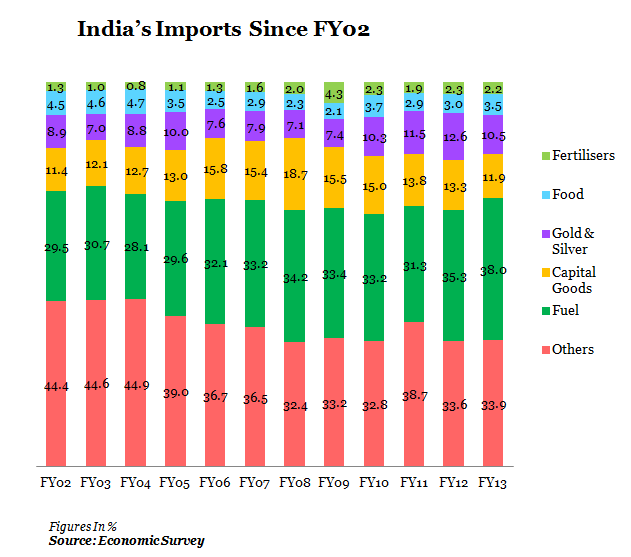 Fuel continues to account for the largest share of imports. With Indians paying subsidised rates for diesel, LPG and kerosene, the global rise in crude prices has not impacted domestic consumption. The recent decision to raise diesel prices should put a dent in demand and aid in curbing the rise of fuel imports.

Coal has added to the burden as imports have risen quickly and accounted for 4% of overall imports in FY12 and FY13 (as compared to 2% in FY02). Ironically enough, India’s coal reserves are among the highest in the world. Clearly, the on-going impasse on mining domestic coal is adding to India’s imports.

Capital Goods retained its spot as the second largest contributor to imports. The share of capital goods rose to as high as 19% in FY08, led by the boom in investment and infrastructure in India. The following slowdown took the steam off capital goods imports with FY13 (Apr-Nov) share falling back to 11%.

Gold’s share in overall imports has risen by 200bps from an average of 8% in FY02-FY07 to 10% in FY08-13. India’s obsession with gold isn’t new and with the perception of gold as an anti-inflation asset, India’s gold imports have kept rising steadily through the post-crisis days of high inflation. This has weighed heavily on CAD given that other items like fuel have remained sticky.

Iron and steel and non-ferrous metals account for 3% of imports and have risen and fallen in line with the overall economy. The metals sector has seen large investment plans in India, but lack of environment clearances and opposition from locals has seen these plans remain stuck on the ground (such as Posco’s high profile entry into India). Lack of investment in this area has once again added to import woes

Exports – Stuck In A Global Slowdown

The following trends can be seen in the breakdown of India’s exports over the past decade. 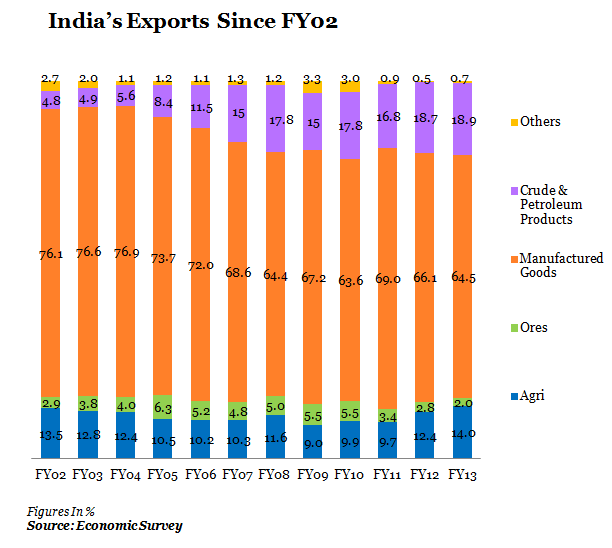 India’s inability to revive its manufacturing sector, coupled with the global economic downturn, has led to a steady decline in export of manufactured goods, which have fallen from 76% of total exports to 65% of total exports in Apr-Nov’FY13. While gems and jewellery maintain their overall share in manufactured goods exports, the share of readymade garments has declined from 11% in FY02 to 4% in FY13(Apr-Nov).

Despite a downturn in FY09-11, India’s agri exports have remained relatively resilient and accounted for 14% share of total exports in FY13 (Apr-Nov), which is similar to levels seen in FY02. Cereals and spices account for the largest share of agri-commodities.

Petroleum exports have emerged as the single largest component of exports over the years. In FY12, it is interesting to note that India’s exports of mineral fuels and lubricants amounted to US$57bn, while the net receipts from telecommunication, computer and information services (which form part of Invisibles) amounted to US$61bn. Hence, in the past few years, petroleum exports have grown large enough to compete with India’s software exports. Petro product exports also stand to gain from a rise in global crude prices.

The rising CAD also reflects the gap between investment and savings. In the post-crisis era, rising inflation has eaten into savings, which have fallen at a faster pace than investments. There is no easy way out of the problem of high CAD. As seen above, the composition of India’s exports and imports has ensured that even in case of a turnaround in global economy, higher crude prices will weigh on India’s oil imports and might not drive a strong enough recovery in exports.

As long as foreign flows continue towards India, the capital account will aid in offsetting the current account deficit. Any change in this equation will hit overall balance of payments once again. As the Finance Minister mentioned, India will have to keep looking for US$75bn every year to fund its CAD.

Imports remain a structural issue and the decision to raise diesel prices is a much-required, even if late, step in the right direction. On the exports side, a boost to manufactured goods by encouraging investments in India is a must and would also help in creating jobs. Till then, India will have to live with depending on foreign money to fund its domestic demand.