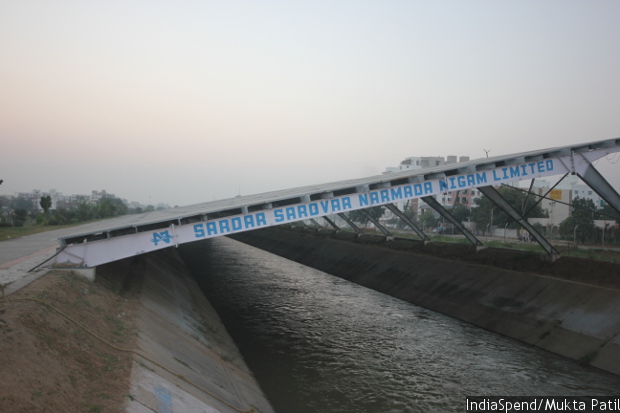 The 10 MW solar canal-top plant at Vadodara in Gujarat, built atop the Sardar Sarovar Canal. As costs reduce, solar installations atop or beside thousands of kilometres of canals might allow India to double its renewable-energy capacity, while saving land in a country three times as densely populated as China.

Mehsana (Gujarat): As far as the eye can see, line after line of solar panels stretch out in the midday sun beating down on the village of Chandrasan here in this eastern Gujarat district, which squeezes in 80 more people per sq km than India’s already crowded average of 441 people per sq km.

But there is no land conflict involved with the Chandrasan installation because the solar panels unfurl over a 750 m length of irrigation canal.

The canal-top solar panels were installed in India’s sunniest state in 2012 and now offer hope for a country three times as densely populated as China, at a time when India aims for almost a nine-fold increase in solar capacity between between 2017 and 2022 to fulfil global climate-change commitments and reduce its dependence on coal-fired power plants.

The canal-top idea was first tabled at a 2011 Vibrant Gujarat Summit by the then Chief Minister of Gujarat, Narendra Modi, said Bela Jani, a spokesperson at state-owned Gujarat State Electricity Corporation Limited (GSECL). The aim was to utilise the area above the canals, saving the government the cost, time and inconvenience associated with land acquisition.

Gujarat alone has a canal network of 80,000 km. Using even 30% of this network for canal-top solar projects, according to GSECL estimates, 18,000 MW of power could be produced in just Gujarat--almost equal to the current coal-based installed capacity of Delhi, Rajasthan and Telangana--and 90,000 acres of land, or twice the size of Kolkata, could be saved.

In other words, installing solar-panels over 30% of Gujarat’s canals could be used to meet nearly a fifth of India’s solar power targets by 2022.

Currently, about 100 MW of solar installations atop and besides canals are either approved or under construction in eight Indian states. Government subsidies are limited to public-sector companies that own canals or canal banks, but, if successful, private-sector involvement is inevitable.

Coal generates over 75% of India’s electricity and is among the cheapest energy sources available, IndiaSpend reported in May 2015.

With over 300 million Indians without reliable energy, and industrial demand growing, the need for coal-fired electricity is estimated to increase three times by 2030, with consequent environmental impacts.

But in talking about what he calls the “seven horses of energy”–coal, nuclear, hydro, gas, solar, wind and biogas–Prime Minister Narendra Modi has declared that India’s efforts should increasingly move towards the latter three.

The real potential in a sunny country to replace fossil fuels is solar: India has a renewable-energy potential of about 895 GW, of which 750 GW is solar, as IndiaSpend reported in February 2015.

By 2022, solar energy could achieve grid-parity in India, meaning it would cost the same as other sources of electricity--although some reports suggest this might happen by 2018. That is the year, as another IndiaSpend report said, renewable-energy sector, primarily solar, could generate 1 million jobs--over 400,000 already exist, according to a 2016 status report by Renewable Energy Policy Network for the 21st Century, a global, multi-stakeholder network based out of Paris.

Solar power plants can be built faster than either coal, gas or nuclear power plants. Further, in the decade ending 2014, solar installed capacity went up from 2.6 GW to 139 GW, a jump of 50 times over the initial capacity in just ten years, largely because of falling costs and improving solar-cell technology.

The critical issue around solar installations in India is space, as IndiaSpend reported in May 2015. That is where the nation’s canals come in.

Canal-top solar power is most efficient, has longer life and saves water

The power output of ground-mounted solar panels decreases at a rate of 1% every year for the first 10 years. However, panels mounted on Chandrasan’s canal showed no degradation and power generated stayed stable over the past three years, according to research conducted by the Gujarat Energy Research and Management Institute (GERMI), a research institution promoted by the Gujarat State Petroleum Corporation Ltd, which is a Govt of India undertaking. 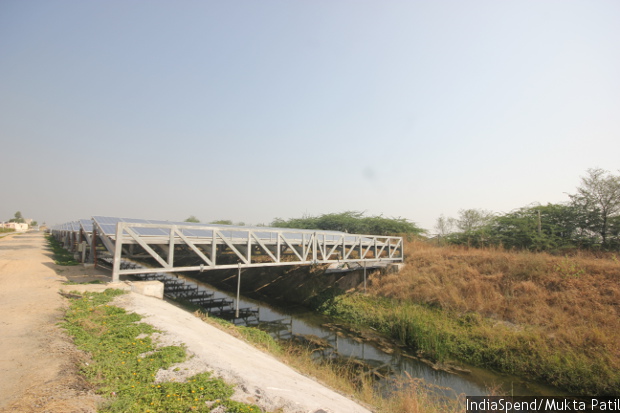 As the midday sun beats down relentlessly, solar panels fixed at an angle atop a 750 m long length of canal in Chandrasan village, Mehsana district, in India's sunniest state of Gujarat, work quietly to produce power while saving evaporation of water that runs beneath.

“Not only do they perform more efficiently, but because we can assume that the generated electricity is utilised in nearby areas, the transmission losses of (normally) 4% and distribution losses of 3% are avoided,” said Sagarkumar Agravat, head of GERMI’s solar research and development.

Apart from this, since the panels are placed on top of water, they are cooled from below, which also increases their efficiency and enhances output by 2.5-5%. 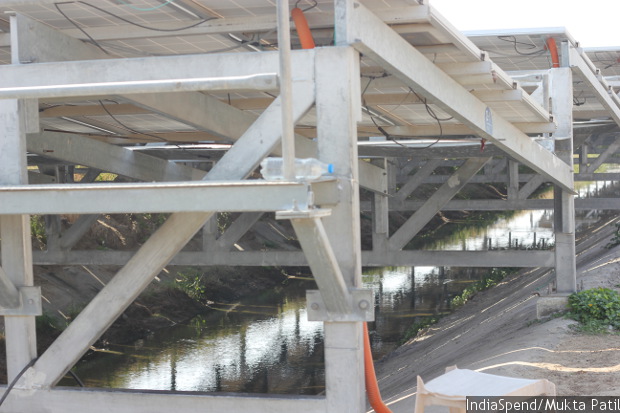 The panels placed at at optimum angle over canal water. When they are cooled from below, their efficiency increases and enhances output by 2.5-5%.

Essentially, this means the panels will last longer than 25 years, which is the average lifespan of a ground-mounted solar panel, while producing more power due to increased efficiency.

Canal-top panels, by absorbing heat, help reduce water evaporation. A 1-MW canal-top plant can save the evaporation of up to 9 million litres of water per year, according to a GSECL estimate shared with IndiaSpend, saving enough to provide 2,500 households with 10 litres of water every day for a year. As more canals are covered, the savings increase.

The use of solar energy also stops the emission of close to 1.28 million metric tonnes per year of carbon dioxide (CO2), a major greenhouse gas, according to this report. This is roughly equivalent to the annual energy use of 110,000 American households saved from a 1 MW plant.

Why solar power is important to India’s climate-change commitments

By 2030, global greenhouse-gas emissions are expected to reach 54-56 giga-tonnes of CO2 equivalent (GtCO2eq)--far exceeding the level of 42 required to limit global warming to 2? by the year 2100, according to data from the Emissions Gap Report 2016, compiled by the United Nations Environment Programme every year.

The Paris Agreement, which aims to hold temperature rise to below 2°C by 2100 compared to pre-industrial levels, came into force on November 4, 2016, barely a month after India ratified the treaty on October 2, 2016.

The 2016 Emissions Gap Report also states that despite full implementation of all the Paris pledges submitted by countries under their Nationally Determined Contribution (NDC), global temperatures are still set to rise to levels ranging from 2.9°C to 3.4°C. This means that countries must now go beyond their intended contributions if they hope to arrest global warming.

As part of its Intended Nationally Determined Contribution, India has committed to source 40% of its electricity from non-fossil fuel sources by 2030. By October 2016, renewable installations amounted to nearly 15% of the installed energy capacity, according to the Central Electricity Authority.

India now faces the challenge of adding a close to 91 GW of solar-power capacity over the next six years to reach its target of 100 GW of solar energy by 2022. In a land-starved country, finding space to install solar plants will be a challenge. This is where India’s network of irrigation canals could be useful. 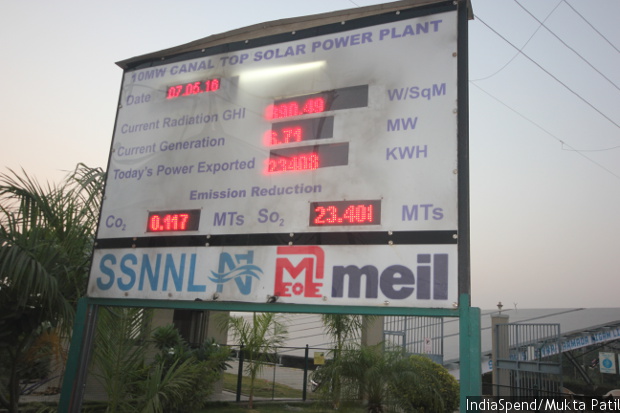 A board outside the 10 MW canal-top solar plant in Vadodara shows the daily export of power from the plant as well reduction in emissions.

In 2012, when the first canal-top project was commissioned, the land required for a 1 MW solar installation was about 5 acres. By 2015, with advances in technology, this was down to 4 acres, Jani said.

Given that the population density of India during the same period (2015) was over 3 times that of China at 441 people per sq km, and over 7.5 times the world average of 56.6 people per sq km, land availability will inhibit solar-energy expansions.

However, capital costs of canal-top installations are, currently, higher than their ground- mounted counterparts. The 1-MW solar plant at Chandrasan (in 2012) cost Rs. 17.73 crore, 77.3% higher than the benchmark cost issued by Central Electricity Regulatory Commission.

A 10-MW canal-top solar plant at Vadodara (in 2015) cost about 47.6% higher than the benchmark cost, according to Neeraj Kuldeep, a research analyst with the Council on Energy, Environment and Water (CEEW), a not-for-profit research institution based in New Delhi.

“We should be looking at this (canal-top projects) as research, and not expect it to be commercially viable immediately,” Kuldeep said. Since canal sizes vary, every installation must be custom-built. That may mean construction delays and cost overruns.

The supports on canal-top panels must be galvanised--given a protective layer of zinc--more thickly than normal because the water beneath increases rusting risks, according to this field study. As technology advances, costs could reduce.

“Two to three years down the line, once the technology and manufacturing processes are in place, the auctioning of such projects will create competition in the market and might reduce tariffs drastically,” Kuldeep added. 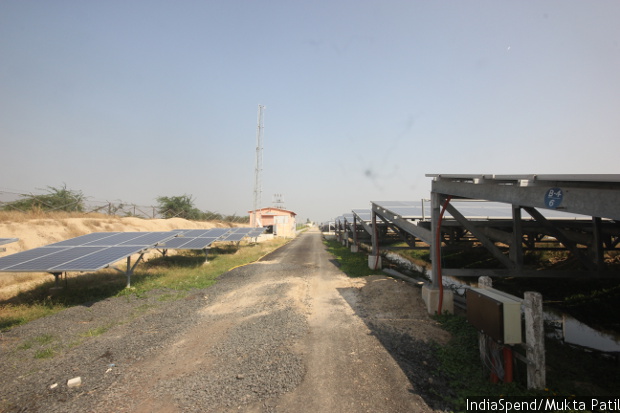 The canal-top panels next to their ground-mounted counter parts, used to check effect of cooling and enhanced efficiency of the panels atop the canal.

Currently, the scheme is only open to government entities including government power and irrigation companies that own canal networks.

“When we started, nobody from the private sector wanted to get involved in the project because of the risks and experimental nature,” said GSECL spokesperson Jani. “So, we decided to pursue it ourselves.” But if canal-top or canal-bank solar plants have to be scaled, private sector involvement is inevitable.

The field study of Chandrasan project suggested ways to support private-sector entry, including rights to use canals, right of way, cutting red tape while issuing licenses, and long-term power-purchase agreements (PPAs) that consider the price differential with ground-mounted panels.

The canals over which the solar panels are installed have already gone through environmental impact assessments. Therefore, according to officials, the new constructions over the canal or on the sides are exempt from further assessments.

The construction of the project at Chandrasan was done in under six months. Permissions and approvals were received quickly and work was fast-tracked because there was no land to acquire or environmental impacts to consider, Jani said.

However, these solar projects require levelling of the canal banks and shadow-free areas above panels. If canals are tree-lined, this would involve cutting trees. Construction could also contaminate the water in the canal, said Kuldeep. “Environmental clearances are important because this is a separate construction that is being undertaken,” he said.