Why Indians Are Losing Out On Libraries 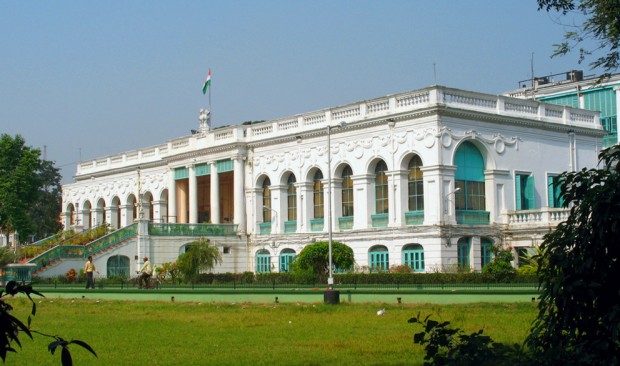 “The only thing that you absolutely have to know is the location of the library.” ? Albert Einstein

With such widespread and deep intellectual backing across the world, India was no stranger to the great benefits of public libraries.

Sayyaji Rao Gaekwad III, the Maharaja of Baroda, who kick-started the public-library system in 1910, wanted his people to be "pupils in the people's university". The kingdom of Kolhapur, in what is now Maharashtra, passed India's first Public Library Act in 1945. Since then, 19 Indian states--the latest being Arunachal Pradesh in 2009--have passed laws enabling the establishment of libraries open to the public.

Yet, India with its 1.2 billion people and after seven decades of independence, does not know how many public libraries it has.

Using a conservative estimate of 35,000 libraries, based on calculations by Raja Rammohun Roy Library Foundation (RRRLF), a trust which funds public libraries and comes under the aegis of the Ministry of Culture, there is only one library per 36,000 people.

An effort to correct the anomaly was the launch of National Mission on Libraries (NML) in February 2014 by President Pranab Mukherjee. Acknowledging the critical role of libraries--and apparently paraphrasing the Maharaja of Baroda--Mukherjee said: “A public library is often called the “people’s university” because it is available to all sections of the society regardless of age, gender, or skill levels.”

The Government of India has allocated Rs 400 crore for the National Mission on Libraries (NML) over the next three years, including the creation of a national virtual library, model libraries and staff training. (Read our previous report on how the NML could revitalise the public library system here.)

As the graph below indicates, large states such as Bihar, Madhya Pradesh, Orissa and Jharkhand have not bothered to even apply for the money available. Only 2% of the total 12,000+ libraries that received assistance were in Uttar Pradesh, the most populous state in the country.

The Foundation helps states customise libraries, but no more than 12,000 libraries are formally registered and, according to this 2012-2013 report, the national average for funds used stood at 27%. Delhi used all the funds available, followed by Chandigarh at 81%. Many states hovered around the 40% mark, but states like Bihar, Punjab, Madhya Pradesh, and Haryana did not use any of the funds available.

When the system does work

There are some common traits among states that have a vibrant public-library system, such as Kerala, West Bengal, Maharashtra, Gujarat to name a few.

One, they have fully functional websites, with details and membership forms, online catalogs, details of manuscripts and journalsand other essential information.

Two, most of them have adopted the library legislation, which gives them benchmarks to monitor and improve on.

Three, they regularly tap into RRRLF resources to scale up infrastructure, buy more books, digitise existing books and train staff. The table below gives you a snapshot of states that are serious about public libraries: 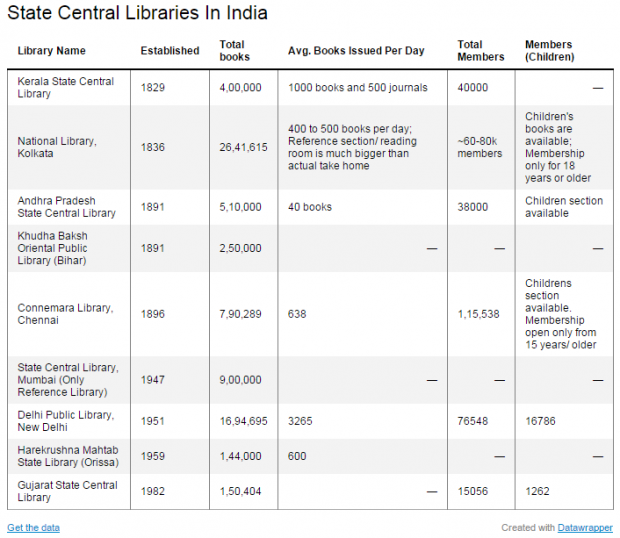 The National Mission on Libraries makes sense, but the basic problem remains: How will it help libraries if the RRRLF--the implementing agency--does not know that they exist, apart from the 12,000 officially registered?

A central online repository of all public libraries in the country might help.

There are many benefits to a vastly improved public-library system across India, with suggestions to link them to, among others, literacy programmes and community services.

As this paper said: "India is in a position to redefine what a public library means, especially with regard to the delivery of community information services and the preservation of local cultural traditions. These are exciting and important times, as a vast number of India’s citizens can serve to benefit from improved public library services......(We need) to continue building this new vision, and...(engage in) sustained and creative action. Millions are waiting."

(Subadra Ramakrishnan is a freelance writer and licensed pilot who lives in New Delhi. You can reach her at: bsubadra@gmail.com)