Why Indian Housewives Are Killing Themselves

Bengaluru: Thirty-six-year-old Shivani (name changed) had been married for 16 years. From the early years of the marriage, she had been depressed because her husband and his family treated her like a servant and confined her to the house, in Rohtak, Haryana, she told IndiaSpend. Her husband would insult her for being overweight and for falling sick often. In August 2017, Shivani took an overdose of sleeping pills to kill herself.

Shivani’s mother-in-law found her unconscious with a pack of empty sleeping pills and called her brother. They took her to the intensive care unit of a nearby hospital, where the doctor brought her back to consciousness and gave her an emetic to induce vomiting. Shivani lived.

She is one of 2,075 Indians who tried to kill themself and failed, a small fraction of those who managed to take their own lives (134,516), according to data from India’s National Crime Records Bureau (NCRB). One of the largest groups of suicides in India are housewives--in 2018, about 63 housewives killed themselves every day, on average, making up 17.1% of all suicides. Since 2001, more than 20,000 housewives have killed themselves every year in India, according to our analysis of national data.

This is second only to daily wage earners--who killed themselves because of unemployment, the agrarian crisis and slow growth of the unorganised sector, putting them at risk of poverty and depression.

Over one third (36.6%) of suicides by women in the world in 2016 were in India, up from 25.3% in 1990, according to a 2018 Lancet report. Married women account for the highest proportion of suicide deaths among women in India because of reasons such as early arranged marriages, young motherhood, low social status, domestic violence and economic dependence, the report said.

The hospital called the police but Shivani and her family signed a letter which said that her husband was not the reason she tried to kill herself and no case was filed.

In most such attempts at suicide, police cases are only rarely filed and it is difficult to verify the exact situation.

“Women are very excited about the wedding itself but when the reality of the marriage hits, it becomes an abusive prison” for many, said Deepa Narayan, a social scientist and author of the book Chup: Breaking the Silence About India’s Women. She said many such young women go through depression but do not reach out for help and often, when they do, they do not get the required support.

“Even when they are mistreated, usually their family asks them to ‘adjust’, causing them further despair” and isolation, said Deepa Narayan, which she said is one of the primary reasons housewives kill themselves. Shivani’s marriage was arranged by her family. Since the first year of her marriage, she had been telling her family that she wanted to divorce her husband but the family counselled her against a divorce.

Shivani’s sister-in-law (brother-in-law’s wife) had killed herself in 2012. Her husband’s family claims that the suicide was because of frequent migraines but Shivani said her sister-in-law had never complained of a migraine. No police case was registered.

NCRB numbers are likely to be an underestimation as families are reluctant to report such cases to the police, just like in the case of Shivani and her sister-in-law.

“It looks bad for the family that someone was so depressed or in such a bad condition that they took the ultimate solution of killing themselves,” said Deepa Narayan. “It is also considered a shameful thing in a family if the daughter-in-law has killed herself, so families make up other reasons,” she said.

Sometimes dowry deaths might also be reported as suicides.

“At least 50% of all the suicides among women could be dowry related, but they are underreported because the parents of the girl are involved in dowry giving, and giving the dowry is also a crime,” said Donna Fernandes of Vimochana, an NGO working for women’s rights. But more dowry deaths are reported as accidental deaths than suicide, such as getting burnt, stove blasts, falling in the bathroom etc., she said.

Many burn injuries and deaths inflicted by partners, in-laws or by women themselves are classified as accidents, according to this 2016 study, “Busting the Kitchen Accident Myth: Case of Burn Injuries in India”, conducted by the Centre for Enquiry into Health and Allied Themes and the Tata institute of Social Sciences, both in Mumbai, IndiaSpend reported in January 2017. The study analysed 22 cases of burn injuries among women, of which 15 were reported as accidents. The investigation revealed that only three were accidents, while others were self-inflicted or caused by others. The study also revealed that 19 of 22 women were, at the time, experiencing domestic violence.

Overall, the prevalence of suicidality (including thoughts of suicide and actual attempts) was higher in women (6%) than in men (4.1%), according to a January 2020 study by the National Institute of Mental Health and Neuro Sciences, based on data from the 2015-16 National Mental Health Survey. The prevalence of suicidality was the highest in women aged 40-49 years, the study found.

Housewives form the second-largest group killing themselves, based on NCRB data, as we said earlier.

Nearly 20 dowry deaths, 35 cases of dowry and 283 cases of cruelty towards the wife by the husband or his relatives are reported in India every day, on average, according to 2018 NCRB data.

Perceptions On Gender-Based Violence in India 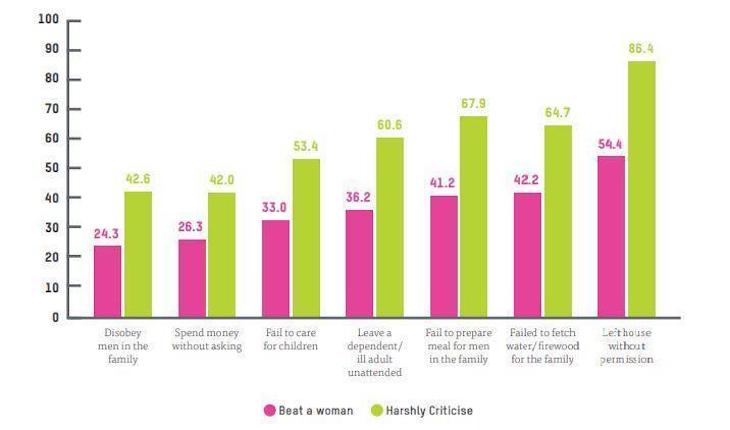 Source: Mind the Gap- The state of employment in India

Forced marriage, infertility, domestic violence, husband’s infidelity, dowry demands and the inability to continue with education or work lead to severe depression in women and eventually to suicide, said Karnika Seth, a lawyer and founder of the Foundation for Institutional Reform & Education, a Delhi-based organisation focusing on social and gender equality.

A woman’s parents feel that their responsibility towards their daughter ceases when she gets married, she said. So a woman who struggles to adjust with the in-laws, particularly in a joint family, has to either suffer in silence or seek legal recourse. But seeking legal recourse is rare, particularly if the woman has children, because of the fear of stigma and the inability to afford living expenses as a single parent, Seth added.

Women reluctant to reach out for help

The reason for a high number of housewives killing themselves is not only social but also biological, said Debdattya Mitra, a psychologist with The Mind Research Foundation, a Bengaluru-based organisation that provides mental health support.

It is extremely common for young women to go through premenstrual dysphoric disorder or postpartum depression, he said. Progesterone in men prevents stress levels from rising, which is not the case in women, making them more prone to stress, Mitra explained.

Only a few suffering housewives seek professional help because, for a majority of them, depression is not even considered a problem when they have other basic issues such as food and the home to take care of, said Mitra.

Further, the issue of mental health is so stigmatised that women do not feel free to talk about it, said Deepa Narayan.

The National Commission for Women (NCW) offers counselling to women facing violence in the home and helps them out by connecting them directly with the district magistrate for judicial help, said Nang Tanvi Manpoong, a media consultant with the NCW. But most women do not speak up or use the avenues available for help, she said.

Even though the NCW carries out awareness programmes, there needs to be a change in how society treats women and more proactiveness from law enforcement, she added.

To change this patriarchal attitude, not just awareness, but a shift in perception is needed in society, agreed Vishwakirti Bhan Chhabra, co-founder of The Mind Research Foundation. Women need to be educated and respected in the household, and boys and girls should not feel that boys are born to work outside of the house and girls are bound to do household work, she said.

“We are cleaning our India through Swachh Bharat, but we are not cleaning our minds,” Deepa Narayan said. “The time has come that men should understand that women are not their property and she has a life as well.”

After Shivani recovered, she started selling clothes and weight-loss products with the help of her brother and her friends. She divorced her husband, fell in love and remarried.

“Women should take their own stand. I took my stand, society says a lot of things, but [they should] stay strong,” she said. “Today I feel so blessed that I have changed my life. I want to tell other women as well that suicide is not an option. Just take steps for yourself, fight the world.” She realised her brother’s support was unique, and had helped her get out rather than kill herself, she said, adding, “Life is precious.”

(Kapil Kajal is a staff reporter with 101Reporters.com, a pan-India network of grassroots reporters.)