Why India Should Use Private Pharmacies In Its War On TB 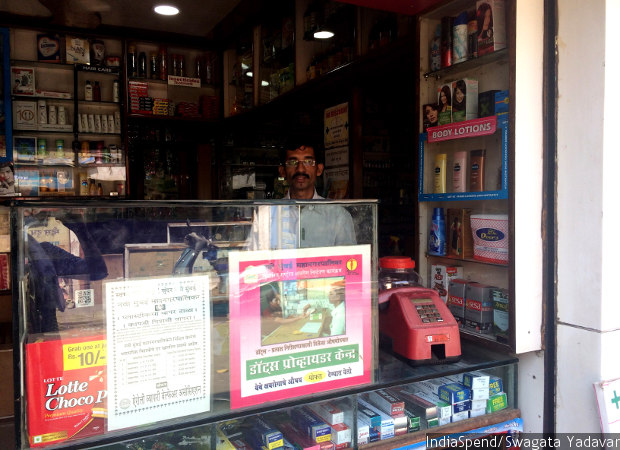 Sandeep Medical Store in Airoli, Navi Mumbai, looks like any other pharmacy, but a board outside says, “DOTS Provider Centre, Free medicines for Tuberculosis are given here”. The store is one among only 75,000--9% of the 850,000 nationwide--which have been recognised as DOTS centres. Despite the success of previous efforts, the government has not fully tapped the potential of private pharmacies to fight TB.

India has over 850,000 private pharmacies or chemists nationwide; yet, only 9% of them--not enough to have a larger public-health impact--have been engaged in efforts to control tuberculosis (TB), according to a January 2017 paper published in the Journal of Pharmaceutical Practice and Policy.

The paper, Engagement of the private pharmaceutical sector for TB control: rhetoric or reality?, reviewed public-private mix interventions to fight TB and analysed global-level documents from the World Health Organization (WHO) and the Stop TB Partnership in five phases from 2003 to 2015.

This is especially important since India has set 2025 as the deadline for eliminating tuberculosis, which would require 95% reduction in new cases, as FactChecker reported in March 2017.

As part of the revised national tuberculosis control programme (RNTCP), India’s flagship anti-TB programme, nearly 75,000 pharmacy outlets were engaged in 12 districts across four states over a four-year period (2010-14) through a public-private partnership to detect and control TB. Approximately 10% to 15% of suspected cases referred by 7,000 pharmacists over two years were found to be positive and placed on treatment, the study found

“Clearly, this example illustrates not only the success of engaging retail drug outlets but also the need for steady scale up to increase national coverage,” the authors of the paper noted.

‘Even local paan-walas were engaged, chemists left out’

Despite making free drugs and treatment for TB available under directly observed treatment short course (DOTS) since 1997, nearly 2.2 million--or around 50%--TB patients in India seek treatment in the private sector, according to this November 2016 study in the medical journal Lancet.

The Indian government considers private providers as assets in its efforts to reach all TB patients for care and control, the draft of the National Strategic Plan for Tuberculosis Elimination 2017-2025, released in February 2017, said. Yet, despite the success of previous efforts, the government has not fully tapped the potential of private pharmacies to fight TB.

Under the DOTS strategy, in the first 2-4 months of treatment, called the intensive phase, patients have to take all their doses under direct observation of the DOTS provider, three times a week (now changed to a daily regimen in five states and set to be expanded). 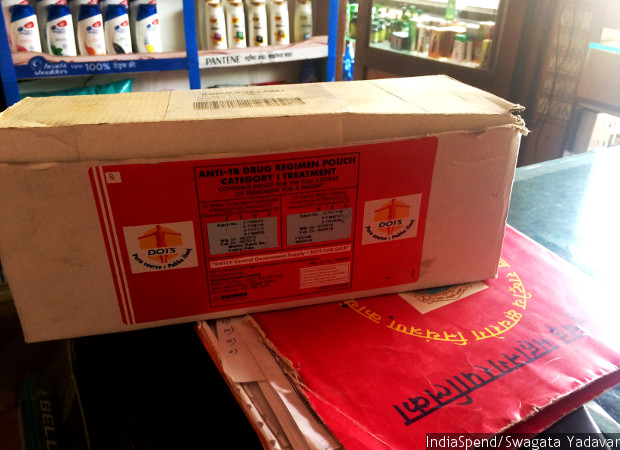 An anti-tuberculosis drug box at a DOTS centre in Navi Mumbai. The box contains drugs for the entire course of treatment for a patient.

For patient convenience, public-health facilities, private medical practitioners and even local points of contact, such as convenience stores, were recognised as DOTS providers.

“While even local paan-walas were engaged as DOTS providers in some cases, chemists had been left out,” said Manjiri Gharat, Vice-President and Chairman, Community Pharmacy division, Indian Pharmaceutical Association.

Private pharmacists tend to be from within the local community, are familiar with residents, are available for long hours and can be easily contacted.

In 2006, the IPA started a pilot project to train pharmacists to detect TB and refer those with symptoms to the public system in Mumbai; almost half of 150 pharmacists so enlisted became DOTS providers, setting up centres in their outlets.

Since pharmacists picked up patients who frequently came with symptoms of TB, such as prolonged cough, they could refer the patients for further tests in government facilities and help them get treated on time. Also, patients found it convenient and less of a stigma to visit a local pharmacy.

By 2010, the project was scaled up, as we said, to four states and 12 districts across the country.

In 2012, the RNTCP signed a memorandum of understanding (MOU) with the IPA, the All India Organisation of Chemists and Druggists, the Pharmacy Council of India and others to “engage pharmacists in RNTCP for TB Care and Control in India”.

By 2017, this Lilly MDR-TB partnership, was running in eight states: Maharashtra, Gujarat, Tamil Nadu, Uttarakhand, Madhya Pradesh, Haryana, Karnataka and Goa. In Maharashtra alone, 134 pharmacies in four municipal corporations were engaged, 70 of whom became DOTS providers and have since referred over 68 patients and treated 500 patients in their pharmacies.

In the narrow lanes of Sector 1, Airoli, a locality in Navi Mumbai, lies Sandeep Medical Store. With neatly-stacked bottles of drugs and pharmaceutical products, it looks like any other pharmacy, but a board outside says, “DOTS Provider Centre, Free medicines for Tuberculosis are given here”.

Proprietor Sandeep Deshmukh has been running the pharmacy since 1989. His pharmacy was recognised as a DOTS provider in 2010, and he has treated 30 patients in the past seven years. “I see it as a kind of social service, which gives me immense satisfaction,” Deshmukh told IndiaSpend.

As many as 30% of cases referred by pharmacists in Navi Mumbai turned out to be sputum-positive for tuberculosis, according to the IPA.

“Patients are generally afraid of going to the government hospital because of the long waiting period, and private doctors often do not bother referring them for sputum test in spite of (the patients) suffering with cough for months, which is where chemists can make a difference,” said Satish Shah, vice president, Navi Mumbai Chemist Association.

Most patients are not aware that medicines to treat TB are freely available in the government centre, or that TB can be cured in six months, he said, adding that this is the kind of awareness that pharmacists help spread.

‘Time to marshal resources and scale up efforts’

The RNTCP had planned to to scale up engagement to reach about 500,000 pharmacies through IPA’s efforts, according to this extract from 2012 World Conference on Lung Health of the Union. By 2015, only 75,000--or 15% of the target--were engaged in the initiative. 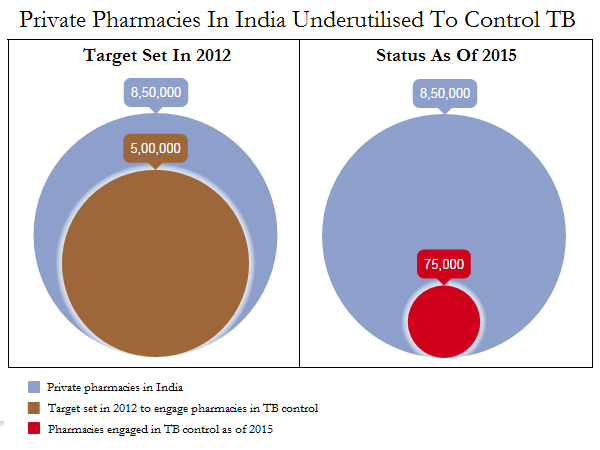 This is a missed opportunity in many ways.

“We know what works and we no longer need ‘pilot initiatives’--it is time to marshal resources and scale up private pharmacy efforts as part of RNTCP's broader private sector strategy,” Niranjan Konduri, co-author of the January 2017 paper and Principal Technical Advisor, United States Agency for International Development, Systems for Improved Access to Pharmaceuticals and Services programme, told IndiaSpend in an email interview.

It would also help India in preventing Antimicrobial resistance by rational dispensing of antibiotics through effective regulation and enforcement with the cooperation of state food and drug administration, TB control department and pharmacists, he added.

“If RNTCP integrates pharmacists all across the country, the impact (of this initiative) would be manifold,” said the IPA’s Gharat.