Why India Might Not Achieve Its 2022 Renewable Energy Targets 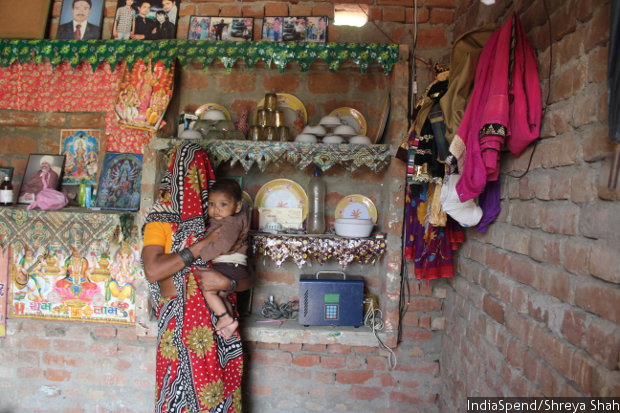 Rajwati stands near the solar energy meter, inside her house in the village of Dhubiya, Uttar Pradesh. She uses solar energy to power three lights and one fan in her house. Such solar home systems provide about 1 GW of energy, a small amount compared to India's 2022 renewable energy target of 175 GW.

Dhubiya (Uttar Pradesh): In the village of Dhubiya, about 25 km south-east of Aligarh, in the northern Indian state of Uttar Pradesh, lives Rajwati, a 35-year-old single mother of three, who goes by only one name. A year ago, Rajwati used kerosene in lamps, the fumes from which suffocated her, and left black marks on her clothes and walls. Rajwati now has three lights and one fan powered by solar energy, for which she pays Rs 600 a month.

“I regret getting this system installed because of the expense,” said Rajwati, her face veiled by a saree. She earns between Rs 1,000 and Rs 5,000 a month, from her job as a cook at a local school and as a farm labourer, but she is reluctant to let go of the convenience the system provides. “Soon, I will own the system and I won’t have to pay for electricity,” she said.

Rajwati lives in a state where over 18.1 million households (roughly 90 million people)--equal to the population of Egypt--live without electricity, according to government data. Many people here use electricity illegally.

Rajwati leased a solar home system from Simpa Networks, a company that sells these systems to under-electrified and unelectrified rural households on a pay-as-you-go model, showing that when people get reliable energy they might be willing to pay for it. The payments add up to the total cost of the system over a maximum of three years, after which electricity will be free--an additional incentive.

Companies such as Simpa, and others that build small energy grids that power a few households or a village, have the potential to reach 73 million unelectrified households in India that still use kerosene as their primary source of electricity--a polluting source of energy that produces earth-warming carbon dioxide, in addition to emitting gases such as carbon monoxide, nitrogen oxides, and particulate matter, with severe health consequences.

But such installations will not be India’s way to achieving its renewable energy targets. Currently, small energy grids and solar home systems together produce about 1 gigawatt (GW) of electricity--a miniscule part of India’s total renewable energy targets, 175 GW by 2022, and its commitment to reduce global warming. Most of the energy capacity to meet the targets will come from rooftop solar energy and large-scale renewable energy plants largely connected to India’s national electricity grid.

In April 2016, Piyush Goyal, the power and renewable energy minister, reiterated that India’s solar power targets--100 GW by 2022--were achievable, according to this government press release, but an IndiaSpend analysis shows that this expansion is challenged by weak infrastructure and a lack of cheap financing.

To achieve its targets, India must add 130.76 GW of renewable energy over the next six years, an average of 21.7 GW per year or, three times the capacity it added in 2016.

In 2016, carbon dioxide (CO2) levels in the world crossed 400 parts per million, levels that will now last our lifetime, as IndiaSpend reported in June 2016. The power sector in India produces about half of all CO2 emissions in the country (805.4 million tonnes), according to the power ministry’s Draft National Electricity Plan 2016; coal is the most polluting of all power sources.

In 2015, the world, through the Paris Agreement, agreed to limit the rise of the earth’s temperature to under two degrees Celsius by the year 2100. As many as 162 countries, including India, have submitted their Intended Nationally Determined Contributions (INDC), documents which describe steps countries will take to limit global warming.

As part of its INDC, India has committed to source 40% of its electricity from non-fossil fuel sources by 2030.

In October 2016, renewable energy made up 15% of India’s installed electricity production capacity, up from 13.1% in August 2015, according to government data.

“More people now recognise that alternative sources can power energy within the household without being connected to the grid,” said Piyush Mathur, chief financial officer of Simpa Energy Networks. 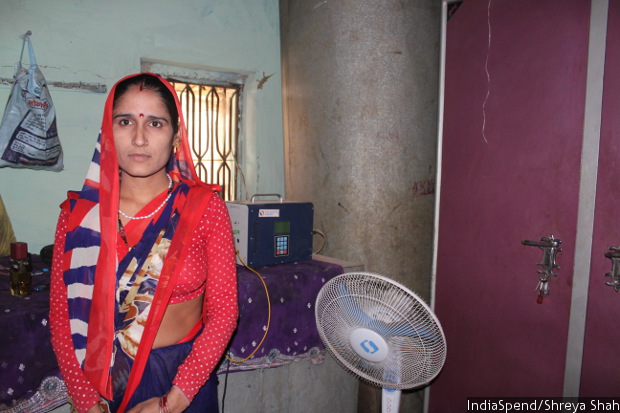 Raveena, who lives in Dhubiya village, in Uttar Pradesh, stands in front of two of the parts of the solar home system--a deep blue box that tells the family when they should pay the next instalment, and a fan that works on solar energy. “I can now talk to my family in Kannauj on my cell phone,” she said.

But India’s renewable energy targets are “highly optimistic and not realistic”, said Vibhuti Garg, a power sector expert at the International Institute for Sustainable Development, a Canada-based environmental non-profit.

India’s renewable energy capacity could be between 100 GW and 155 GW by 2022, according to estimates by researchers.

India’s 2022 target is equivalent to 22% of the world’s cumulative renewable energy capacity in 2015--785 GW, excluding hydel power projects, according to a 2016 report by the Renewable Energy Policy Network, an international non-profit, based at the United Nations Environment Program.

Over the last quarter of 2016, the government auctioned fewer projects than needed to match its renewable energy goals, according to a report by the Mercom Capital Group, a US-based energy research and communications firm.

India also faces the challenge of moving 21% of its population out of poverty. No country has been able to achieve a Human Development Index (HDI) of 0.9--which suggests high life expectancy, income and education--without an annual energy availability of four tonnes of oil equivalent per capita, India noted in its INDC.

The growth in renewable energy would have to keep pace with the increasing energy requirement of the population. One estimate puts the total requirement of electricity in India at 5,000 terawatt hour in 2040, a four-fold increase from 2014.

In 2015, India invested $10.2 billion of public and private money in renewable energy, about a quarter of the annual investment needed, according to a report by Institute for Energy, Economics and Financial Analysis (IEFFA), a US-based research organisation. Government financing forms only a small part of the total investment. In 2016-17, the Indian government budgeted $758 million (Rs 5,035.79 crore) for renewable energy.

The country needs $100 billion in asset financing for renewable energy over the next six years, according to report by Bloomberg New Energy Finance (BNEF), a London-based energy consultancy.

“The biggest bottleneck we see is financing,” said Abhishek Jain, senior program lead at Council on Energy, Environment and Water (CEEW), a New Delhi-based research organisation. “If financing is achieved, the targets are achievable,” he added.

The government’s 2016 Renewable Energy Invest Summit--which brings together financiers, and developers of renewable energy--has been indefinitely postponed, according to a government circular.

In the government’s Renewable Energy Invest Summit in 2015, developers and manufacturers of wind and solar energy products and plants were willing to commit to creating more renewable energy, than money available for projects. Solar and wind developers committed to nearly 240 GW of renewable capacity addition by 2022, but financiers committed money for only 70 GW added capacity, according to a June 2016 analysis of government data by CEEW.

The government might be underestimating the total investment--$92 billion (Rs 6 lakh crore)--required for 175 GW of solar energy, the analysis added, suggesting an alternate higher investment of $120 billion to $147 billion (Rs 7.22 lakh crore to Rs 8.8 lakh crore).

Lenders and equity investors find it risky to invest in renewable energy because of uncertainty about whether publicly owned power distribution companies will eventually purchase the power generated, regulatory issues related to land acquisition and government clearances for projects, and questions about the capability of India’s electricity grid to manage the extra energy generated, the report added.

“The Indian renewable industry needs to be made attractive enough to invite funds,” said Tulsi Tanti, chairman and managing director of Pune-based Suzlon Group, a company that has 9.8 GW of wind installations in India. “Banks and financial institutions should earmark at least 20% finance for renewable energy projects (while providing debt for a longer term of 20-25 years),” he added.

Still, lowering the cost of debt and equity for capital expenditure will accelerate growth in solar energy, said Jai Sharda, managing partner at consulting firm Equitorials, explaining that solar energy is a capital-intensive industry and if the initial cost of setting up the plant is high, the cost of solar energy is pushed up.

The other aspect of financing is paying for energy produced by renewable sources. Solar energy, the backbone of India’s renewable energy targets, is, on average, still more expensive than coal-based energy.

One kilowatt hour of electricity through solar plants now costs between Rs 4.5 and Rs 5.5, much less than it costed three years ago at Rs 7 to Rs 8, but still higher than Rs 2.5 to Rs 3.5 for domestic coal-powered energy, according to Garg, the IISD power sector expert.

Further, electricity distribution companies (known as DISCOMS) do not always pay for electricity on time, with payment delays being common in Tamil Nadu, Rajasthan, Madhya Pradesh and Maharashtra, according to the Mercom Capital report.

Infrastructure for parks such as development of access roads, land acquisition for parks, and demarcation of land areas within solar parks, is incomplete, even after bids for projects are completed, which could affect project costs and profitability, according to the Mercom Capital Group report. Government officials told the firm that development of solar parks is in its early stages and state agencies were working to resolve issues as they arise, the report said.

Further, power from sources such as wind and solar is intermittent, and forecasting of energy levels is weak. “We still don’t know how much (electricity) capacity will be available and when,” said Garg, which makes it an unattractive venture for power distribution companies to connect to renewable sources.

For instance, “What if it rains continuously for three days?” Garg said, adding that India still does not have reserve electricity capacity that could be used in such situations.

One way out would be to store energy when excess is produced, but storage equipment for solar energy is expensive, as IndiaSpend reported in January 2016.

In 2012, the Indian government said it would build a green energy corridor to augment existing transmission infrastructure both within and across states.

“For a project that has already had its share of delays and is being touted as the cure-all for grid issues, the renewable energy sector is skeptical if it will get done in time to make an impact”, according to the Mercom Capital Group report.

The Rs 38,000 crore green energy corridor is on track to be completed by 2019, and transmission infrastructure will be built within states as renewable energy capacity grows, the power ministry said in October 2016.

“We need to speed up the execution of (the) green energy corridor and encourage massive investments in upgradation and creation of new transmission and grid infrastructure,” said Tanti, Suzlon’s chairman, via email. The government should build grid infrastructure well in advance on a bigger scale, before a project is completed, he added.

Solar power projects in India have a “must-run” status, which means they should be running at all times possible, given that there is no fuel cost when compared to thermal power projects which use coal.

But solar plant operators were asked to “back down” or stop producing electricity several times, which is a disincentive for companies as they are not paid for the lost energy during that period, according to a renewable energy ministry document in August 2016.

Correction: The headline of an earlier version of this story read, "Why India Might Not Achieve Its 2020 Renewable Energy Targets". This was corrected to reflect that the targets being discussed in the story are for the year 2022. We regret the error.