Why India Is Fighting A Losing Battle Against Urbanisation 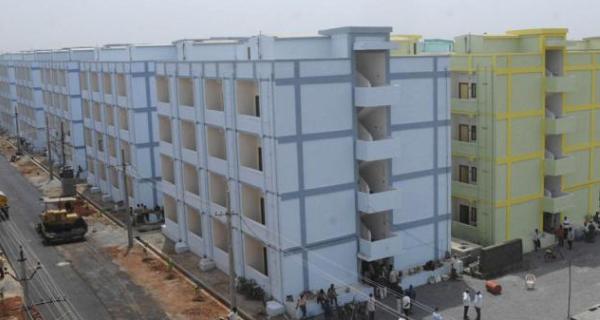 The Jawaharlal Nehru National Urban Renewal Mission (JNNURM), a Government programme aimed at changing the urban landscape of the country, has come in for criticism from the Comptroller & Auditor General of India, the country’s federal auditor.

While the JNNURM’s successes are evident in a few states like Gujarat, Maharashtra and in cities like Ahmedabad, Surat, Nagpur and Pune, the programme has not been very effective elsewhere in the country. The JNNURM’s implementation hurdles, in some ways, are as staggering as the scope of its ambitions.

For example, Uttar Pradesh, which has seven cities considered for JNNURM projects, has completed just one project in contrast to Gujarat that has completed 38 projects.

IndiaSpend’s Prachi Salve looks at CAG’s report and the latest report of the Ministry of Urban Development, which is implementing the programme, to find out what is holding back the projects.

JNNURM was launched in December 2005 to develop cities across the country by improving physical infrastructure and local governance.Though the programme was to end in 2012, it has now been extended by two years to 2014.

The mission was initially divided into two sub-missions:

1. Urban Infrastructure and Governance (UIG); and

Two other components were added later to accommodate more cities and towns: 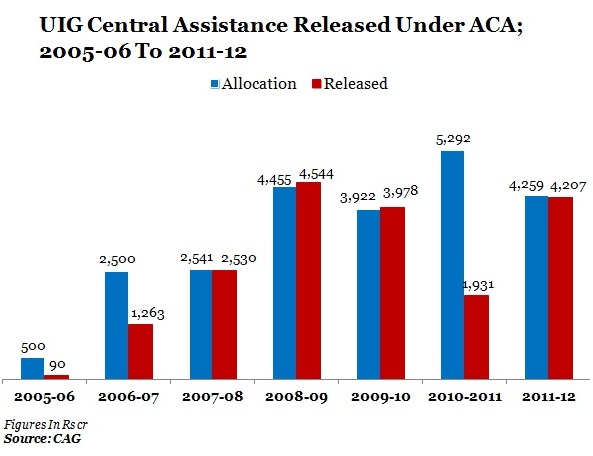 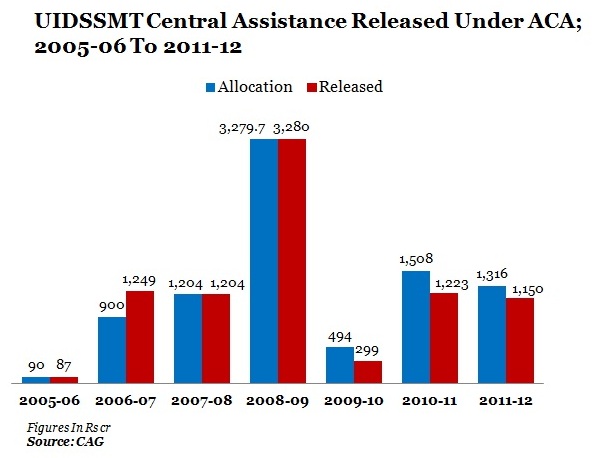 According to the CAG report, funds released were dependent on the condition that reforms would be implemented by the urban local bodies (ULBs). This was not done by most states hence the delay in release of funds to the states. Another reason for the late release of funds was the seeming delays in approval process of the central government and the inability of the state governments to complete the requisite formalities.

Let us now look at the implementation of the projects…

While UIG covers nearly 65 mission cities, UIDSSMT will cover cities and towns not covered by UIG. Figures 2 (a) & (b) shows the number of completed projects under the two programmes. 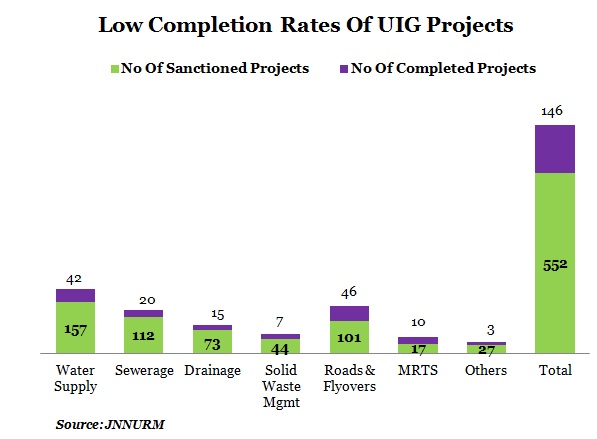 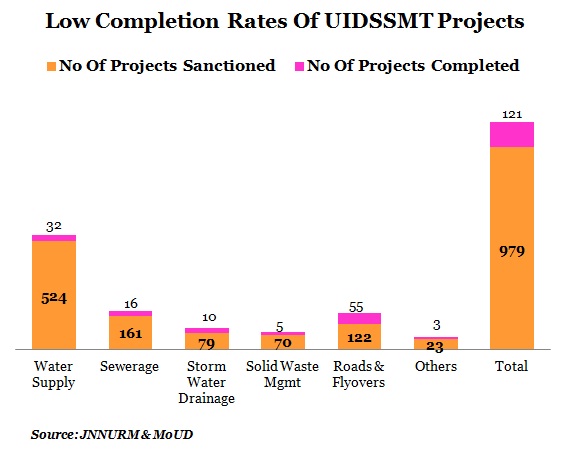 Figures 3 (a) & (b) show the top 4 with the best and worst performances under JNNURM. 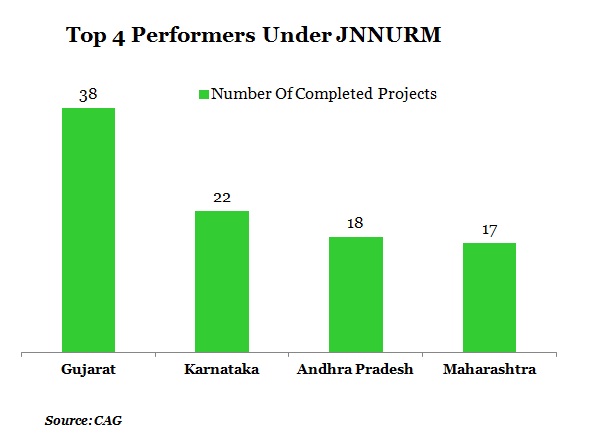 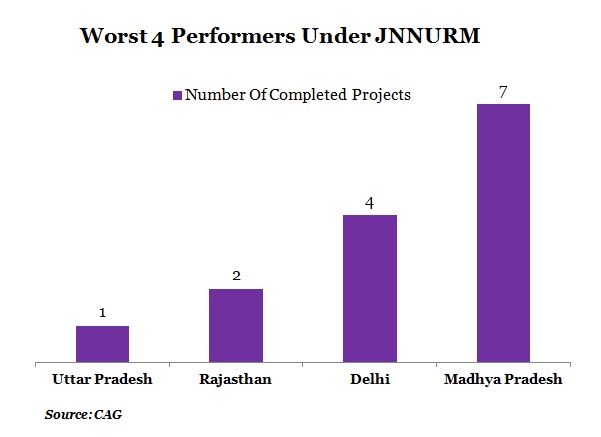 Not even one project was completed under UIG in states like UP with 7 Mission cities and 33 projects. Similarly, under UIDSSMT, only 121 projects were completed out of 979 approved projects. The Ministry of Urban Development has citied reasons like delays in getting clearances from various authorities and lack of capacity of ULBs for the project delays.

CAG studied 37 water supply-related projects for its audit report. The major reasons highlighted by the report for non-completion of projects is lack of clearance from different authorities, problems related to land acquisition and a slow tendering process.

Even with completed projects,most of them could not meet the benchmarks set by MoUD. Five cities (Kolkata, Asansol, Dhanbad, Greater Mumbai and Patna) were to ensure 24X7 water supply but none of them were able to achieve the target. The efficiency in collection of water charges was the highest in Asansol at 66.9% and the lowest in Kolkata at 56.77%... and the benchmark was 100%collection for water charges.

Sewerage projects are the second highest category in both the sub-Missions with 112 projects sanctioned under UIGand 161 projects under UIDSSMT. And the completion rate is 20 for UIG and 16 projects for UIDSSMT.

The reasons for non-completion include encroachments and land being used for other purposes. A look at the states now: In Gujarat, 4 out of 6 projects in Ahmedabad and 6 out of 9 in Surat were completed. Patna, which was one of the 15 cities targeted for 100% coverage, did not get even one project approved!

Roads/ flyovers are the third highest projects under JNNURM with UIG accounting for 101 and UIDSSMT for 122 projects. And the number of completed projects is UIG=46 and UIDSSMT=55.

According to the CAG report, road projects faced major delays due to ‘undue benefits’ to the contractors and hikes in project costs. Contractors in some projects were allowed to take some materials with them even thoughthey had been paid for by the respective departments. In Andhra Pradesh, JNNURM funds were used for paying bills for the Godavari Drinking Water Supply scheme which is a state government run scheme.

Some other irregularities, according to the CAG report, were:

Diversion of funds: Funds released by the government were utilised for other purposes ranging from payment of bills and salary to municipal employees to compensatory forestation, which was not covered under JNNURM. For example, in Jharkhand, JNNURM funds were used to pay salaries to municipal staff.

The JNNURM projects have, in general, exposed the lack of capacity of urban local bodies and the state governments when it comes to implementing projects efficiently, for that matter even getting them off the ground. But worryingly, the data so far not just highlights the administrative challenges for a host of Government bodies but the larger national challenges of managing urbanization and the inability of infrastructure to keep pace.