Muslim Population Growth At 20-Year Low
Medical Termination of Pregnancy Act Failing Women Who Need It The...
Birth Certificates Are Citizenship Proof, Govt Says. But 38% Under-5...
India Will Have Largest Population But Data Show The Growth Is 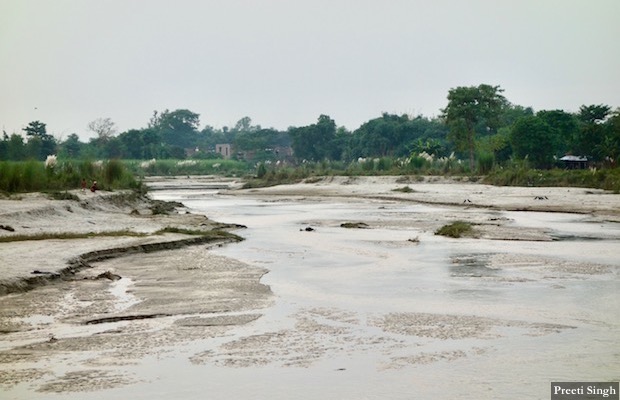 Marjadi village in Pashchim Champaran is surrounded by rivers on all four sides. It faced unprecedented flash flood in the intervening night of Aug 12-13.

Pashchim Champaran (Bihar): Charoin aur nadi, beech main Marjadi [rivers on all four sides and Marjadi in the middle]--that is how a local saying describes Marjadi village. Situated in Gaunaha block in north Bihar’s Pashchim Champaran district, the village has Harbora river to its east and Ganguli river to its west; Kathaha cuts right across through it.

There are over 350 families living in Marjadi and they are quite used to the rise and fall in the waters of these pahadi [hill] rivers that come from Nepal.

However, the ferocity of the floods that nearly drowned the village in the intervening night of August 12 and August 13 this year left even disaster-prone Marjadi stunned.

At around 6pm on August 12, it started to rain heavily and the downpour continued till the next morning. “By 11 pm, there was chest-high water gushing fast through the village,” said Narendra Ram, a Marjadi resident. “People panicked and ran to the roofs of pucca houses and spent the night there.”

The water level in the village had crossed six feet.

“All our stored grains, cattle, clothes, everything had been washed away,” said Chanda Devi, who had to be rescued by her fellow villagers as the waters rose outside her home. 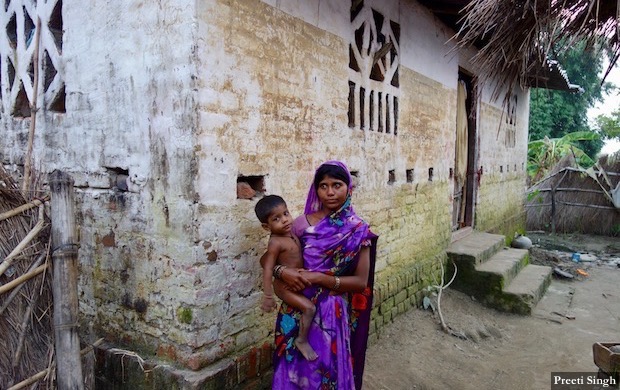 Chanda Devi of Marjadi was caught in the rising flood water along with her two young children. They were rescued by fellow villagers as water level crossed 6-feet (mark on the wall of the house) in the village.

“I am over 80-years-old and have seen many floods, but the night of August 12 was nothing but pralay [apocalyptic deluge]. Had the downstream Triveni canal not breached, our entire village would have washed away,” said Jagan Ram, an old resident. “Pran ke ilawa gaon main kuch nahi bacha hai [Only human beings are left in the village].”

Last month, Bihar faced massive floods, as all the major rivers of north Bihar – including the Gandak, Burhi Gandak, Bagmati, and Kosi -- rose due to heavy rainfall in the Terai region. The floods affected 17.1 million people in 19 districts of north Bihar, killing 514.

More than 73% of Bihar’s 94,163 sq km area is flood-prone. The problem is particularly acute in north Bihar, where almost 76% of the population--about 50 million people--lives under the constant threat of floods. Of these, those who live along the India-Nepal border deal with an additional danger -- unpredictable flash floods originating from the rivers that flow down from the Himalayas across the border.

These flash floods that routinely affect the districts of Pashchim and Poorvi Champaran, Madhubani, Sitamarhi, Araria and Kishanganj are ancient affairs. But, local villagers and the state government officials claim that these floods are becoming more frequent because of climate change.

“Bihar is facing the impact of climate change, rainfall patterns here are getting disturbed. Rains come in bouts followed by long dry spells. We not only face more floods, but also have rising incidence of droughts in the state,” said Vyas Ji, vice-chairperson of Bihar State Disaster Management Authority (BSDMA).

Why flash floods need a different plan of action

Flash floods and their aftermath need to be dealt with differently from riverine floods. Their character, behaviour, impact, occurrence and frequency are distinct from the big, riverine floods for which the government has an established protocol for rescue, relief and compensation.

For one, flash floods are not driven only by the monsoon; a heavy and steady downpour can unleash a torrent from the mountain rivers. Five Terai villages in Bihar visited by this reporter endure between 15 to 60 flash floods every year. 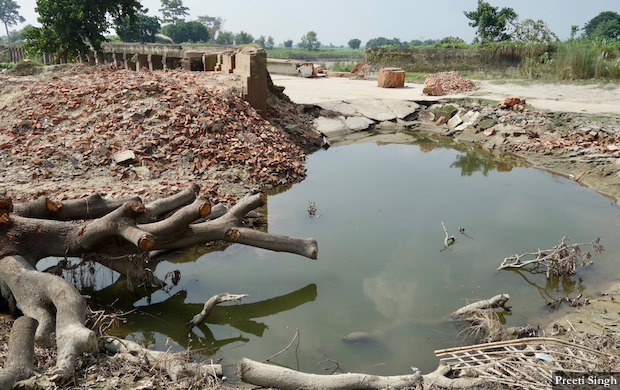 Triveni Canal breached due to the high velocity floodwater of Harbora river, providing respite to Marjadi village which would have otherwise washed away due to the rising waters.

The waters recede fairly quickly--within four to eight hours --unlike riverine deluges, but the destruction is as much.

Since they occur frequently, the damage caused needs to be assessed quickly and compensation packages disbursed fast, so people can resume their lives.

However, IndiaSpend’s extensive conversations with villagers across the Terai showed that this is rarely the case. 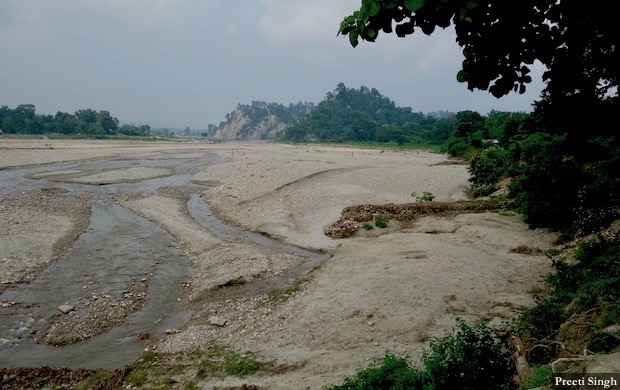 The Pandai, a hilly river, comes from Nepal and flows along the India-Nepal border to later join the Burhi Gandak River. The Pandai brought massive flash flood to Bhikhnathori village and eroded 31 households.

“Minutes before the flood, we heard gargarahat [loud thunderous noise] of large stones coming along with the flood waters,” said Kalan Khan, 82. “The river water had turned yellowish brown and we could see the Pandai jumping high and coming towards our village. We ran for our lives.”

Nilesh Deore, the district magistrate of Pashchim Champaran, admitted that the floods caused unexpected devastation this year. “Our district is flood-prone and we had stationed rescue boats along the main Gandak river. But, this year the pahadi rivers, the tributaries of Gandak and Burhi Gandak, brought massive flash floods in areas we had never imagined to be affected.”

The state chief minister, Nitish Kumar, too said the recent disaster was “akin to flash floods”.

Whereas the government believes that the recent flash floods are a one-off event, the villagers living along the India-Nepal border told IndiaSpend that they have been dealing with them for years, and multiple times in a year.

“We face floods some 15-20 times in a year, but these are localised flash floods and never make it to the official records,” said Vinita Kumari, a resident of Poorvi Tola Rupwaliya village in Gaunaha block.

“Flash floods are directly proportional to the rainfall in the upper catchment area,” said Eklavya Prasad, managing trustee of Megh Pyne Abhiyan (MPA), a non-profit working on water and sanitation issues in the north Bihar. “Mostly flash floods go unreported because they do not always occur during the flood season.”

Last December, MPA carried out a study titled ‘Post Disaster Recovery: Assessment of Needs in Moderate Flood Conditions’ in Pashchim Champaran, Khagaria and Saharsa districts of north Bihar. It found that the small, pahadi rivers report flash floods up to 50-60 times in a year, causing extensive damage to property and crops destruction.

Take the case of Chegraha River that regularly brings floods Harkatwa village in Rupwaliya panchayat of Gaunaha between January and October. The normal width of the river is approximately 60 meters but this increases to 500-700m during monsoon and on days of heavy precipitation. 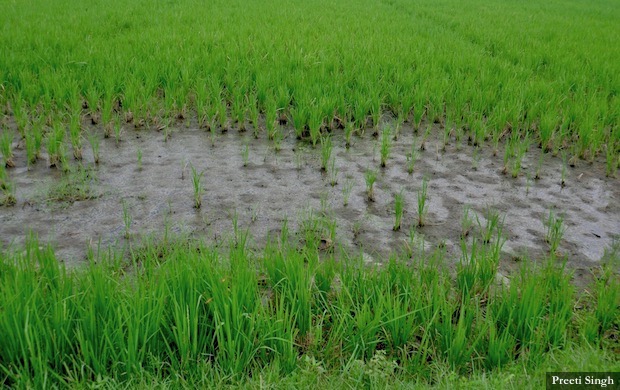 Last year, Harkatwa faced 60 instances of flash floods. In the last 10 years, it has had 450 flash floods. Annually, the villagers lose over 50 acres of standing paddy crop, which amounts to a loss of Rs 720,000 per year. Sugarcane worth Rs 262,500 too is lost to flash floods every year. 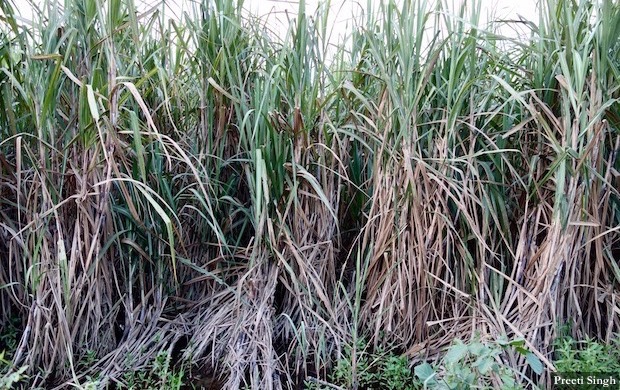 Standing sugarcane crop destroyed due to floodwaters in Pashchim Champaran.

Floods annually wash away stored foodgrains in Harkatwa – it has lost paddy worth Rs 540,000, wheat worth Rs 225,000 and pulses worth Rs 56,000 every year in this manner, according to the MPA study.

These losses are neither officially recorded nor compensated, said Prasad.

600 kg of paddy, 1 quintal of wheat -- what Sushila Devi lost to the last flood

Villagers along the India-Nepal border alleged that they do not receive any compensation for their recurring losses. “In the 1986 flood, five houses were washed away in our village, and then in 2010, another seven. But, no one has received any compensation,” said Puna Singh, secretary of the village forest rights committee, Bhiknathori. 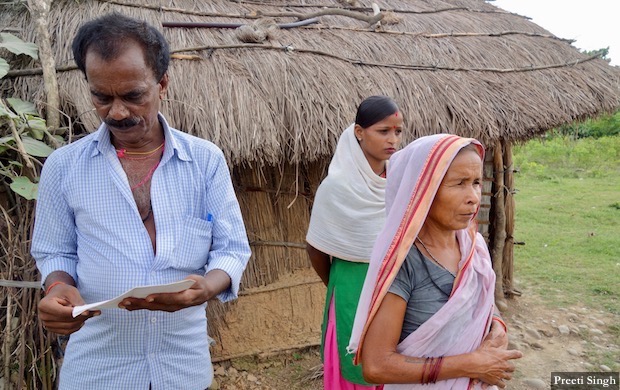 Ramsheela Devi of Bhiknathori village, with her husband and Madhu Devi.

Residents of Poorvi Tola Rupwaliya claimed that they have suffered huge losses in the recent floods. “So far this year, we have had 11 flash floods, but haven’t received a paisa of compensation,” said Sushila Devi who lost about 600 kg of paddy, 60-70 kg of rice and 1 quintal of wheat in the recent floods.

Bihar government officials claim the state has an elaborate compensation package that goes beyond the Centre’s assistance. “The Centre does not provide gratuitous relief if flood-affected people are moved to shelter homes. But, we give Rs 9,800 gratuitous relief per family if the house is lost and even if the family is in shelter home,” said Vyas Ji. 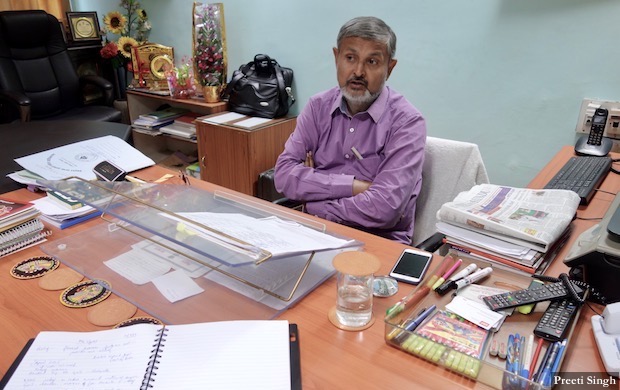 The compensation requires photographic evidence -- of how a damaged house looked before the flood or of dead cattle -- that villagers said is hard to procure. “How do we photograph washed away, dead cattle?” asked Kishore Paswan of Marjadi. 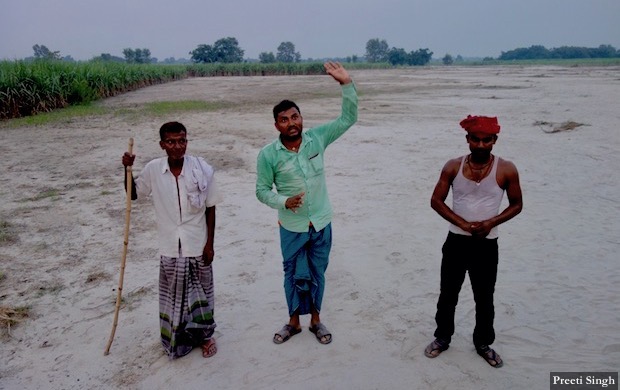 Residents of Marjadi claim that the flooded rivers brought huge amounts of silt (sand) and have deposited 2-feet sand on their paddy and sugarcane fields.

“We have recently received a compensation of Rs 6,000 per household in our tola for house damage during the recent floods. This is the first time we have received any money from the government,” said Vinita Kumari of Poorvi Tola Rupwaliya. Her tola [hamlet] has faced 394 flash floods in the last 10 years, excluding the 11 this year.

Compensation for crop damage for maximum two hectares ranges between Rs 6,800 per hectare (ha) and Rs 18,000 per ha. “On paper, the government has a nice compensation package, but we never benefit from it. We have lost 200 cattle and over 150 goats in the recent floods,” said Kishore Paswan of Marjadi.

Why Bihar needs to act fast

What can be done? First, it is important to recognise flash floods as a distinct phenomenon requiring different relief and compensation strategy.

Secondly, there is need for effective weather warning. For instance, between August 12 and August 13, Gaunaha block received 367 mm of rain within 24 hours. But villages along the India-Nepal border were not aware of the forecast.

Last, the habitat needs to be made flash-flood resilient given how often the waters swamp the villages. “Such a habitat should have various life-supporting systems for an early recovery from recurring phenomena that include health securities, safe drinking water and hygienic sanitation, flash-flood resilient housing, crop insurance schemes, skill development for flash-flood preparedness, and so on,” said Prasad.

Dealing with terrains like north Bihar requires alternate thinking on issues that connect ecology to lifestyle. A good example of this is the flood-resilient ecological sanitation toilet, phaydemand shauchalayas, built by MPA in the villages of Pashchim Champaran. Excreta and urine are separated in this system for use in fields as fertilisers and the water required is minimal. Unlike the soak-pit toilets with underground septic tanks being promoted by the government, these eco-toilets are built on a raised platform so these can be used even during the floods.

Climate change is leading to erratic rains and floods to Bihar, deputy chief minister of the state, Sushil Modi said recently and the cycle of frequent disasters is likely to worsen in coming years. Several districts, including flood-affected districts, are at present facing rainfall deficit.

The Bihar government cannot afford not to act.

(Jamwal is an independent journalist based in Mumbai.)