Mumbai and Vadodara: “I am at the naka or at a site working all day. I can’t take care of her from there, so I prefer she come with me and earn a bit for the house,” said Meena Ben Rathwa, holding her 14-year-old daughter Jhini’s hand, as they stood at Harinagar Naka, Vadodara, hoping to find wage work for the day.

Meena Ben and her husband Rajesh Rathwa are among the millions of naka workers--casual workers who gather at a naka or junction to get hired for wage work--employed in the construction sector, the fastest growing and second largest daily wage employer in India after agriculture. This has been their livelihood for 13 years.

Nearly 50 million Indians worked in construction between 1983 and 2011-12, and the sector absorbs the largest proportion of rural workers surplus in agriculture. Workers at Harinagar Naka told IndiaSpend that despite the uncertainty, they prefer to work in construction because work is more regularly available and wages slightly better than in agriculture.

The Rathwas’ 16-year-old son escaped the uncertainties of daily-wage work to drive an autorickshaw in Vadodara, but Jhini had to quit school last year and join her parents at the naka. Together, the family find employment for 12-15 days a month on average, at wages that provide for little more than sustenance.

Various central government laws seek to provide a semblance of a safety net and welfare measures for construction workers, of which the Building and Other Construction Workers (Regulation of Employment and Conditions of Service) Act of 1996 (BOCW) and the BOCW Welfare Cess Act of 1996, are the most important.

They provide for a welfare fund for workers, which states create by levying a cess of 1-2% on construction projects, applicable to any establishment employing 10 or more workers and to projects costing more than Rs 10 lakh. State welfare boards collect the cess and pay social security benefits to workers who register with them. Workers aged between 18 and 60 years who have been engaged in building or construction work for at least 90 days in the preceding 12 months are eligible to register. The benefits include pension, assistance in case of accident, housing loan, education, group insurance premia, medical expenses, maternity benefits, and so on.

However, 23 years after the Acts were passed, implementation remains poor. Most states did not even constitute welfare boards until as late as 2011, so the cess collected was not disbursed. Uttar Pradesh, which recorded the highest number of construction workers (12 million) in 2016-17, was one of them, according to data compiled by the National Campaign Committee for Central Legislation on Construction Labour (NCC-CL).

IndiaSpend visited nakas in Navi Mumbai, Maharashtra, and Vadodara, Gujarat. Both are 'developed', industrialised states that have fared poorly in terms of cess collection and disbursal, according to India Exclusion Report 2017, published by the Centre for Equity Studies, New Delhi. 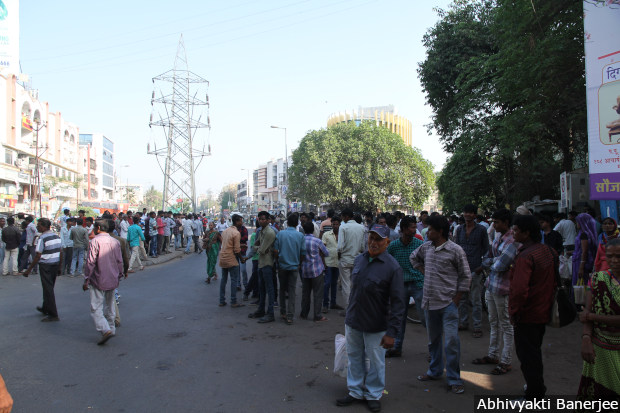 Harinagar Naka, a labour chowk in Vadodara, Gujarat where hundreds of construction labourers gather every morning in hopes of getting employed.

A quarter of funds utilised

More than half, or 19 of the 36 states and union territories, spent less than 25% of their collected funds. Kerala was the only state to have spent more than the collected funds and Goa, 90% of its funds. Meghalaya (2%), Chandigarh (4.7%) and Maharashtra (6.8%) had the lowest usage of the funds.

Only four states collected more than ₹2,000 per worker per year and more than 20 states collected less than ₹1,000, according to the NCC-CL, a National Committee working to secure social security rights for construction workers. The data are also from the National Sample Survey Office (NSSO) as well as affidavits filed in court by the Centre and states.

“The distribution of these funds is scheme-wise and cannot be calculated per person, so each worker will get money from the cess depending on the number of schemes they are eligible for,” said a source from Maharashtra’s labour department, when asked why the amount of funds distributed per worker per year is so low.

“We have no idea about the Acts, but we know that there are some benefits we can get if we register,” said Konduba Hingole, a naka worker from Nerul in Navi Mumbai.

Some builders and contractors IndiaSpend contacted in relatively developed states such as Gujarat and Maharashtra said they were unaware of these laws. “I employ workers on a project basis, and we have a Munshi who gives them a card. The card is only meant to mark the days they come to work and they are paid off at the end of the month or when the project ends. I have never known about this registration process,” a builder in Vadodara, Gujarat, told IndiaSpend, not wishing to be named.

Many factors make registration difficult, ranging from design flaws to overlapping Acts and the lack of political and administrative will on the ground, according to the India Exclusion Report 2017.

Maharashtra, the report showed, was among the worst performing states in terms of registration of workers (610,000) and cess disbursal (7% of the cess collection of Rs 5,483 crore) in 2017.

“The government set up a committee in 2007 [in Maharashtra], after the Act was established in 1996, and it was only after 2013-14 that they started registering workers. But the process of registration is not as fast as it should be,” said Deepak Kamble, a Labour Helpline Associate since 2012 with the non-profit development organisation Youth for Unity and Voluntary Action (YUVA) in Navi Mumbai, who works to register construction workers in Mumbai and Navi Mumbai.

A major challenge for construction workers in Maharashtra is obtaining the 90-day job completion certificate from the employing builder or contractor. He/she then has to pay a fee of ₹85 to submit the registration form.

“Earlier the worker had to go to the commissioner’s office directly for registration. Then the government decided to involve the urban local bodies and municipalities, who were given charge of issuing the 90-day certificate. This would involve the authority going to the naka, identifying regular naka workers and giving them certificates,” said Raju Vanjare, project coordinator at YUVA.

Builders have to deposit the cess to get clearance for their projects, Kamble said.

“Big construction companies or contractors make sure that their workers are registered. However, naka workers don’t get registered easily as they do not get the 90-day work certificate,” he said. A recent government notice aimed to enable speedy registrations by authorising certain government officials such as gram sevaks or ward officers to issue certificates.

“I got my 90-day work certificate as I worked for one boss for a period, otherwise it is difficult to get it,” Sanjay Rathod, a naka worker from Nerul in Navi Mumbai told IndiaSpend, “But even after getting the 90-day certificate, my registration has not been completed, though it has been almost a year since I submitted my documents. Getting benefits is a far cry.”

Naka worker Hingole said he had registered himself with the help of the municipal corporation, which gave him the 90-day certificate.

“Many of the registrations done are incorrect or have not been registered properly. There are seasonal workers who leave once the employment season ends and their registration cards remain with us,” said Kamble.

Maharashtra has about 16 welfare schemes for safety, health, education and financial assistance on various counts under which the cess can be utilised to disburse benefits to workers. But “[Government officials] make excuses saying ‘today the boss is not here’, ‘you will have to wait’, ‘the registrations are in process’ or ‘we haven’t received money from the board yet’,” said Kamble.

When funds are disbursed, activists say, it is just to show that money is being spent. “It should have been opposed by genuine trade unions,” NCC-CL’s Bhatnagar said, “What they are actually supposed to give out of this is immediate relief in case of an accident, a pension when workers reach retirement age, housing loans, healthcare when there is a health claim and education incentives for children’s education.”

“No one takes any initiative to get workers registered. The government officials are unaware of the GRs that are issued. Despite our explaining the regulation, they refuse to cooperate. One of the officials even told me that he does not care about the GR,” said Kamble, adding that with the impending elections, registration camps were held in 2018. “Lots of media and dignitaries were present. They even provided on-the-spot registrations for a day. However, no camps were conducted from 2014 to 2017. There was no difference when the previous government was in power.”

“Even though my registration is done, I have not got any benefits yet,” said Hingole, “There are new people in the [municipal corporation] office and they are now questioning the 90-day work certificate that the same office gave us.”

The Maharashtra labour department now plans to establish ‘Worker Facilitation Centres’ at the district level to increase registrations and speed up the process. It also wants to appoint an agency to set up district-level facilitation centres with a target to enrol 600,000 workers annually. The department’s proposal is awaiting approval by a High Powered Committee.

Appointing an agency is unnecessary, Bhatnagar said, “If you run a centre, what is your interest? To register as many workers as possible to get income. Suppose you get Rs 10 or Rs 20 per registration, you will register everybody to achieve a target, whether it’s an auto-rickshaw driver or shopkeeper because you have to make money. Why will you bother to only register construction workers?”

The 38th report by the Standing Committee on Labour recommended a dual system of registration, online and offline, be developed for construction workers across all states, and that labour identity cards be linked with Aadhaar cards to avoid duplication.

Following this, a gazette notification was issued by the ministry of labour and employment to enable building and construction workers to register at the Shram Suvidha Portal of the labour ministry by paying registration fees by e-challan. Each worker would be assigned a Labour Identification Number (LIN) after registration. As of April 3, 2019, 2,685,058 LINs have been generated.

However, the process has not been smooth for everyone. “The site keeps hanging and we are not able to upload the worker’s photograph,” said Kamble, “We have not used the site for any registrations.”

New labour ‘codes’ proposed to overhaul labour laws and regulation include a draft Labour Code on Social Security & Welfare Bill brought out in 2018 to simplify and amalgamate dozens of overlapping or conflicting laws related to social security and welfare of workers. It suggests that the BOCW cess be continued, and a common system of administration of social security and welfare schemes be put in place for unorganised sector workers.

“There are many assumptions in the Bill which cannot be realised, such as assuming that all workers will be able to contribute 20% of their salary every year for accessing benefits,” Bhatnagar said. “It does not consider the plight of the worker who is not employed for major part of the year. It cannot be implemented simply because there is no framework for collection of this 20% from every worker.” He said the BOCW Acts should continue as it is.

The activists and workers that IndiaSpend spoke to disagreed on whether construction workers need new laws or programmes, or effective implementation of existing ones.

Among the new proposals is the Pradhan Mantri Shram Yogi Maan-dhan (PM-SYM) pension scheme for unorganised sector workers announced in February 2019, which is a voluntary, contributory pension scheme; and the Modified Model Welfare Scheme for Building and Construction Workers, which provides for a life and disability cover, as well as health, education, housing and pension. 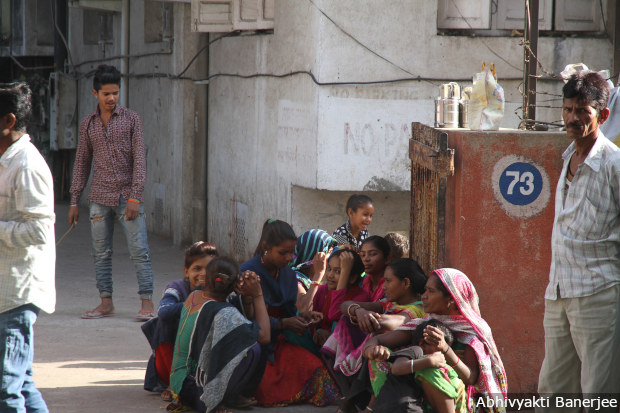 Women construction workers usually get paid less than the men and they have to take their children along with them to the construction sites where there are no provisions for childcare.

(Banerjee, a Master’s student of Political Science at M.S.U., Vadodara, and Raibagi, a data analyst and a graduate of computational and data journalism at Cardiff University, are interns at IndiaSpend.)