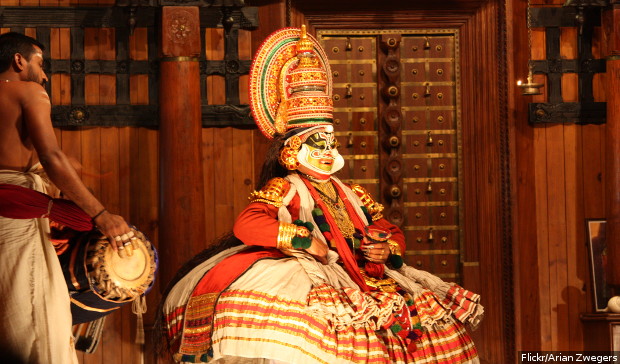 With the budget coming up on February 29 and attention turning to how resources should be distributed, we analyse why the culture ministry hasn't used up its funds.

Unused ministry funds at the end of a financial year don't roll over to the next year but are returned to the Ministry of Finance.

A major reason why 2013-14 saw underspending increase was because of a 10% cut that came into effect in November 2013, seven months after the budget.

However, the outcome budget--an examination of ministry spending--for 2013-14 reveals a sizable amount that didn't have anything to do with austerity cuts.

As much as Rs 12.3 crore ($1.8 million) of plan expenditure for the "Financial Assistance for Promotion of Art & Culture" was not spent because the ministry did not receive enough grant applications that were eligible.

Funds under this category are used to provide grants for dance and theatre ensembles, tribal and folk arts, and non-governmental cultural organisations, among other things.

Now, Rs 12 crore might seem a drop in the pond compared to the culture ministry's overall budget. But to get an idea of how significant Rs 12 crore is, let's look at the repertory grants under this category.

Repertory grants promote the guru-shishya (teacher-disciple) tradition critical to a performing-arts education in India. It does this by giving a salary of Rs 10,000 ($147) per month to one guru and Rs 6,000 ($88) per month to his shishyas. If every guru has nine shishyas, Rs 12 crore allows support for 171 more gurus and 1,539 more shishyas.

Either way, the money is unspent.

Another fact is that even those who get these grants endure delays before getting the money.

How grant delays create financial insecurities they are supposed to dispel

A committee set up by the culture ministry and chaired by former culture secretary Abhijit Sengupta took strong exception to delays in funding, according to this 2014 report of the ministry.

"Delays in the release of funds cause hardship for young scholars and performers. The slow disbursement of grants, whether deliberate or not, whether a matter of indifference or not, removes the very financial security that the grant was supposed to provide," the report said.

The repertory grants mentioned above are just some of the many schemes that come under the category of 'promotion of art and culture'.

This category was allocated Rs 495 crore ($72.7 million) in the 2015-16 budget, more than a fifth of the culture ministry budget. The rest of the budget went to museums, libraries and archives around India. 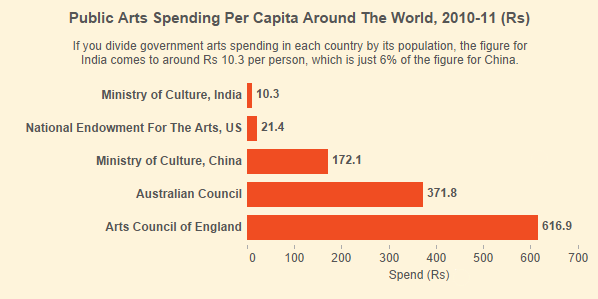 Source: National Endowment for the Arts (US), Ministry of Finance, Xinhua ; *Data for China from 2015.

Spending in the US may seem low at Rs 21.4 ($0.47) per capita, but the low public spend figure is more than made up by the vibrant philanthropic scene in that country.

Could private donors, such as ones in the US, make up for the paltry funding of the arts in India?

Private funding of culture in India is selective, according to a 2014 report by the Bangalore-based Centre for the Study of Culture and Society.

"The effort has mainly been to integrate the arts into a larger developmental focus, that of rural livelihoods: in turn leading to supporting crafts practices", says the report, a practice that excludes arts which don't help in improving incomes.

Why the arts matter

Donor priorities in India reflect a narrow view of development, one that the economist Amartya Sen has argued against.

"Development, seen in a human perspective rather than grossly in terms of the expansion of material means, must take note of the enrichment of people’s lives. The performing arts cannot but have a major role in making our lives richer and finer. In this sense...the tradition and practice of the performing arts is constitutively a part of the process of development," wrote Sen in a World Bank paper.

So, even in a third-world society concerned with roti (food), kapda (clothing) and makan (shelter), there could be a place for arts and culture.

The government has tried to give arts funding a new direction by bringing together several existing schemes under the umbrella of the Rashtriya Kala Sanskriti Vikas (National Arts and Culture Development) programme.

Whether this move will breathe new life into the culture ministry or just reorganise budgetary heads on paper is unclear. ¦