Why Bihar Can Treat Only 0.3% Of Malnourished Children 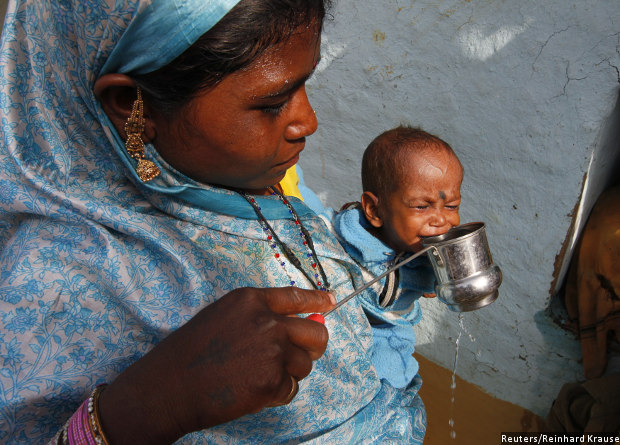 Poona gives water to her 18-month-old daughter, Urmila, who is suffering from severe malnutrition. Witnessed most in the form of under-nutrition, malnutrition is mainly caused by not having enough to eat, not eating enough of the right things or being unable to use the food that one does eat.

Of 5 million malnourished children under five in Bihar, no more than 0.3%, or one in 340--at best--can be treated at the state's 38 nutrition rehabilitation centres (NRCs), the first line of primary care against a condition that can permanently inhibit future potential in a region with India's youngest population.

There is one NRC for every Bihar district, serving roughly an area of 100 sq km, according to right-to-information (RTI) appeals that we filed. Bihar, India's third-most-populous state, has the country's greatest proportion of young people, with a median age of 20 years, as IndiaSpend reported.

Each NRC has either 10 or 20 beds, and assuming each child is treated for 20 days--the average time needed--each NRC treats about 365 children in a year. That means Bihar's NRCs--assuming they have 20 beds and round-the-year service, which is not the case--treat 13,870 children, or 0.3%. 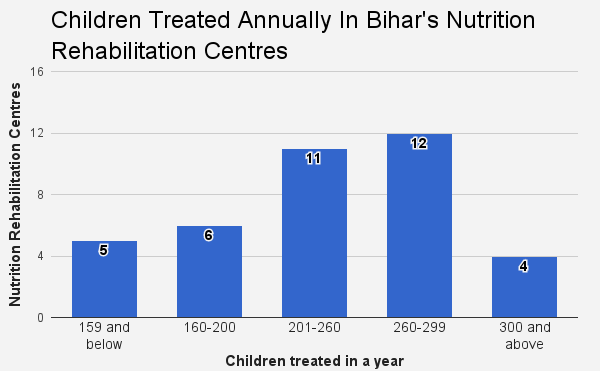 An equally--if not more--worrisome issue is children who lapse back into malnutrition after treatment. Between 30% and 40% of families reported a relapse within a month of discharge. No more than 41% of the families visited the NRCs for the eight-week follow-up programme, RTI data show.

Of Bihar's estimated 100,000 "severely acute" malnourished children--children who are three standard deviations from the median growth standards and at risk of death; in simple terms, children who have one of the lowest growth rates and, as a consequence, risk death--no more than 0.5%, or 500 children, stand a chance of being treated at these NRCs and 200 children can be treated fully.

Along with Jharkhand and Madhya Pradesh, Bihar has India's highest proportion of malnourished children--more than half, according to the Rapid Survey on Children and the National Family Health Survey-4.

India ranks third in Asia and 24th worldwide for the number of malnourished children aged one to five, according to the 2015 Global Hunger Index.

A possible solution to treating Bihar's malnourished children might be to do away with the specialised 20-bed NRCs. Instead, primary health centres (PHCs) located in every block (a group of 10-15 panchayats, village councils) can take over NRC responsibilities.

The general public is not aware of the existence of NRCs, and if they are, these centres are too far away.

There are other options, such as community management of acute malnutrition, implemented in Bihar by Doctors without Borders, a global non-governmental organisation.

The government’s Sneha Shivir programme to implement specialised camps in anganwadi (child care) centres and facilitate door-to-door malnutrition-specific care appears to be a step in the right direction, but is yet to be started.

Relapse can be addressed using phone calls for reminders, and follow-ups through automated phone calls and messages.

While the central government has approved a proposal from the Bihar government to increase the number of NRCs across Bihar, there is no apparent progress.

Many governments of poor states, including Bihar, hope to bring down the proportion of malnourished children to less than 30% by 2018; this appears ambitious because these targets do not match the work on the ground.

(Srikant is a volunteer at SevaSetu, a social organisation based out of Bihar. Ojha is the chairman of SevaSetu.)