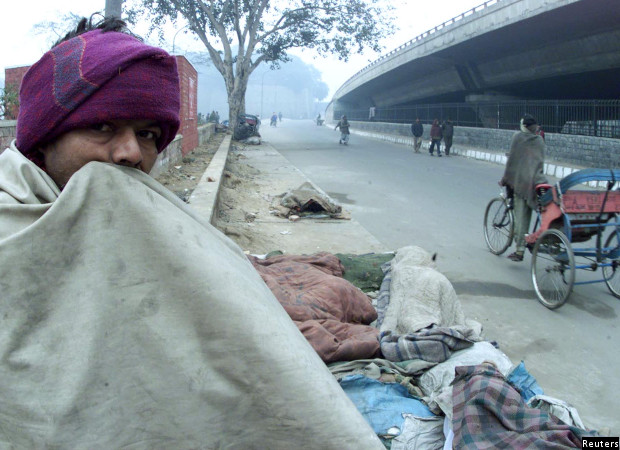 As many as 10,933 Indians (an average of 781 per year) have died over the past 14 years--between 2001 to 2014--due to “cold and exposure”, an analysis of statistics on accidental deaths due to natural causes obtained from the Open Government Data (OGD) Platform of Government of India reveals.

The deaths are largely in direct relation to the homeless population in a state, higher in states which do not comply with the Supreme Court’s orders to provide better shelters for the homeless.

Homeless men bear the brunt of death in winter

Men outnumber women by five times with 9,152 men and 1,780 women succumbing to death from exposure to cold.

A plausible explanation for the excess of men dying could be the higher homeless male population, especially in urban areas. India's homeless sex ratio (number of women per 1,000 men) is 694, while it is 878 in rural and 558 in urban populations, according to the 2011 census.

Among men, those aged between 45 and 59 are most vulnerable, while women aged above 60 are most likely to die of cold exposure.

Between 2001 and 2014, the most deaths due to “cold and exposure” were recorded in 2012--nearly 1,000. The cold wave in December that year alone killed 249--the sixth-highest number of deaths due to a natural disaster in the world, as per the Annual Disaster Statistical Review 2012 report.

The last 10 days of December 2012 witnessed severe cold wave conditions--similar to January that year--with a maximum temperature that was 5 degrees celsius below normal, according to the Annual Climate Summary 2012 issued by the National Climate Centre. Earlier that year, the Ministry of Home Affairs, Government of India, had included cold wave/frost in the list of natural calamities eligible for official aid.

The worst-hit states are among the poorest--except Punjab

Uttar Pradesh (UP), Bihar, Rajasthan and Punjab have been particularly vulnerable to the cold wave phenomenon between 2000 and 2009, with 13, 12, 12 and 10 cold waves respectively, according to a report by the National Institute of Disaster Management.

UP saw most deaths between 2001 and 2014 due to cold weather. Not only did it have the most cold waves but also has the highest percentage of homeless population at 18.56%. Punjab and Bihar also witnessed many cold waves but have considerably fewer homeless people--2.63% and 2.57% respectively.

Yet, Punjab and Bihar record the second- and third-highest number of deaths.

Both states--along with others--were reprimanded last year by the Supreme Court for their “insensitive approach towards the homeless, many of whom die due to the biting cold", and were ordered to set up adequate shelters before the harsh winters.

Incompetence of states or negligence?

Indian states do not have a good track record in sheltering their most vulnerable people--the homeless.

After a series of orders from the Supreme Court--in 2010 and 2011--to state governments for ensuring better shelter for the homeless, the Supreme Court Commissioners evaluated compliance of 16 states in the report titled “Permanent Shelters for Urban Homeless Populations” in 2012. The states were graded as good, average, poor and no compliance (or wilful disobedience).

None of the states have complied well with court orders.

Delhi, UP and Tamil Nadu have been graded as average and could do better by opening more shelters and upgrading temporary and dysfunctional shelters to permanent ones. Nine states show poor compliance. Most states have non-functional or unfinished shelters. Many shelters are dismal and thus remain unutilised. Maharashtra and West Bengal fall in the wilful-disobedience category, as no functional shelters were found in either state.

The case of Rajasthan--a state put on notice by the Supreme Court for failing to provide adequate shelters for the homeless--is peculiar. It is subject to many cold waves and 10.24% of its people are homeless; yet it records only the ninth-highest number of deaths, although it has been graded as poorly compliant.

The state was also indicted by the Supreme Court Commissioners’ Report over “no mapping of homeless-concentration zones” in any of the cities surveyed.