Why 4 Of 5 Indian Children Do Not Survive Cancer

Mumbai: How long does a cancer diagnosis take?

Six months, according to Bipin Jana, 45, whose eight-year-old son Parmeshwar has stage-4 Hodgkin’s lymphoma. That is how long it took the family, travelling 2,000 km across West Bengal, New Delhi and finally, Mumbai, to get an effective diagnosis and start treatment.

Parmeshwar is currently undergoing chemotherapy at the Tata Memorial Hospital (TMH), Mumbai, India’s foremost cancer treatment centre. Almost half (43.6%) of the children with cancer admitted here had to travel over 1,300 km to reach the hospital, records showed. Up to 10% travelled over 2,200 km and 20% had undergone alternative or incomplete treatments before reaching TMH.

With timely diagnosis, children with cancer have a high rate of survival. If he lived in a high-income country, Parmeshwar would have had a 90% chance of recovery. Since he is being treated, his odds are still better than India’s national survival rate for juvenile cancers--less than 20%, according to the World Health Organization.

Worldwide, most children with cancer are from low- to middle-income countries and have poor survival rates, showed the study published in The Lancet Oncology, a global journal, in July 2019.

India has the highest prevalence of childhood cancer which can be traced to its higher population of young people, 30% of its population is below 14 years, according to 2011 Census.

In order to understand why most children with cancer in India do not survive five years, IndiaSpend interviewed patients, non-governmental organisations and doctors. Delays in diagnosis, high medical expenses and non-completion of treatment are significant reasons, we found.

Survival rate can be 70% with timely care

About 50,000 Indian children between 0-19 years of age suffer from cancer each year, according to The Lancet study we mentioned. “However we think the actual figure is closer to 75,000,” said Girish Chinnaswamy, head oncologist at the TMH.

Approximately 20,000 children remain undiagnosed and untreated and their survival rate is 0%, he said. “For the 55,000 who are accessing treatment, 15,000 are receiving a good standard of treatment with trained oncologists as well as social, dietary and financial support and this group has a survival rate of 70%,” he said.

The other 20,000-30,000 are visiting centres with less-trained oncologists and without holistic components such as education, social support and nutrition. Their survival rate is around 30-40%, said Chinnaswamy.

“The problem is that families are not accessing appropriate treatment, or they are abandoning treatment once it has started,” said Anil Nair, chief executive officer of St Jude India ChildCare Centres (SJICC), which provides accommodation for parents and children undergoing cancer treatment in six cities including Mumbai.

Another factor is the high cost of treating paediatric cancers. “Unlike cancers in adults, cancers in children need a whole team of medical oncologist, radiologist, pathologist, internist etc,” pointed out Shripad Banavali, director, academics and professor of paediatric and medical oncology at the TMH.

No facilities in rural areas

Nearly 70% of Indian population lives in rural India. However, nearly 95% of cancer-care facilities are in urban India. India has 0.98 oncologists per million population, compared to 15.39 in China, 25.63 in the Philippines and 1.14 in Iran, as IndiaSpend reported in September 2017.

Centres such as TMH offer tertiary care which means that they offer specialised medical services. So the patient is likely to go to a doctor at a primary or secondary facility for a diagnosis, then he/she is sent to the nearest big hospital for treatment and finally referred to a cancer treatment centre.

The TMH treats 2,800 children with cancer each year. However there are less than 8-10 big paediatric cancer centres in India, and almost all are located in large cities such as Mumbai, Delhi, Pune, Bengaluru, Chennai and Kolkata, as per Banavali.

“We need at least 20 big centres that treat paediatric cancer in India,” he estimated. “We also need more paediatric centres and more people willing to come forward to fund treatment for children as the treatment is expensive.”

Parmeshwar’s own journey, starting from his village Nandigram in West Bengal’s south-eastern district of Purba Medinipur, illustrates the long route to treatment for most patients in India.

Parmeshwar had a high fever--for three months--which refused to subside despite treatment. His father worked as a dishwasher in a hotel in Mumbai but had to quit to care for his son. Parmeshwar’s illness was first misdiagnosed as typhoid and, then, malaria. After this the family travelled to Kolkata, where he was admitted for weeks in a hospital but got no treatment.

When nothing appeared to work, Jana brought Parmeshwar to the All India Institute of Medical Sciences (AIIMS), New Delhi, India’s best-known tertiary care centre. But no vacant beds were available for the child. Parmeshwar was then sent to Safdarjung Hospital, one of the five government hospitals in the city. It was here that he was put through an ultrasound test for the first time--three months after he first fell sick.

“The hospital staff asked me what were we doing, why it took so long to start the investigations,” recalled Jana. “I told them I kept telling doctors but no one listened to me.” Parmeshwar was then detected with Kala Azar or visceral leishmaniasis and underwent treatment for a month but did not get any better.

The doctors at Safdarjung Hospital then conducted a biopsy and a bone marrow test. He was finally diagnosed with stage-4 Hodgkin’s lymphoma. “Had I known it is cancer, I wouldn’t have waited for six months for diagnosis, I would have directly come to Mumbai,” said Jana, breaking down.

Parmeshwar was finally sent to TMH and the cancer treatment started in August 2019--six months after he first spiked a fever. 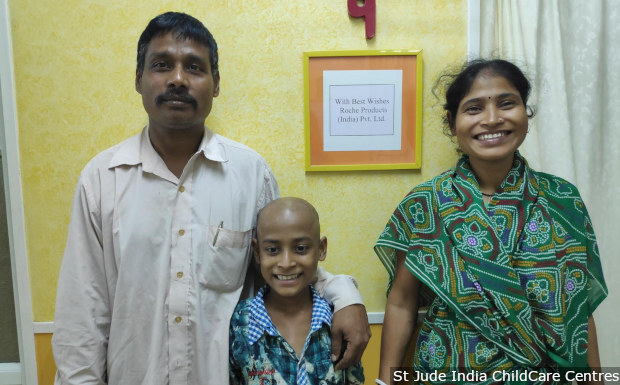 Parmeshwar, 8, with his parents Bipin and Mamata Jana, at the St Jude India ChildCare Centre in Mumbai.

“These treatments may not be sufficiently executed, which can ultimately make the cancer more resistant to treatment and as a result lengthen the process of treatment,” said Chinnaswamy.

“This is not a direct journey either,” added Nair of St Judes. “Families have usually spent most of their money before they reach treatment, travelling from doctor to doctor and paying for different treatments before being referred.”

Families abandon treatment to opt for traditional complementary alternative medicine (31%), because of financial constraints (28%), or false belief that cancer is incurable (26%), found a study which analysed patients over six years at TMH.

“Just the cost of staying in Mumbai itself during treatment costs about as much as the treatment and this can force many families to head back home before treatment is finished,” explained Nair of St Jude’s.

Jana has spent close to Rs 1 lakh that he raised from friends and family members to pay for his son’s treatment. Once in Mumbai, the family was lucky enough to find a place to stay at St Jude’s. Facilities here include individual family living units, shared common kitchen and dining areas, educational and sanitary guidance for parents, and family counselling--all to give the child the best chance of beating cancer, said Nair.

Families that do not have access to facilities like this will often live on the footpath next to cancer centres for as much as two years, leaving the child vulnerable to secondary infections. Families thus survive without toilets or cooking facilities. The overall experience can leave families dejected and demoralised to the point where they often abandon treatment and return home.

“To eliminate these causes of abandonment, treatment requires a multidisciplinary team--oncologists, nutritionists, nurses, psychologists, data scientists, and social workers,” said Chinnaswamy. “This is the difference between at least 50 centres in the country which have a survival rate of 70%, compared to the others which have 30-40%.”

The introduction of social workers, financial assistance, accommodation, counselling, infection guidance control, school education for parents to the treatment process at TMH doubled the number of lives saved per year, reducing abandonment rate from 20% in 2009 to 4% in 2016, as well as the refusal to undertake treatment reducing from 9% to 2.7%, found a March 2019 study by the TMH.

While Bipin Jana is satisfied with the treatment his son has received in Mumbai, he regrets the six months wasted in getting here. “My son’s life is now in God’s hands,” he said.

(Habershon, a graduate from the University of Manchester, is an intern with IndiaSpend. Yadavar is a special correspondent with HealthCheck.in and IndiaSpend.)