Why 1.1 Million HIV+ve Indians Don't Get Drugs They Need 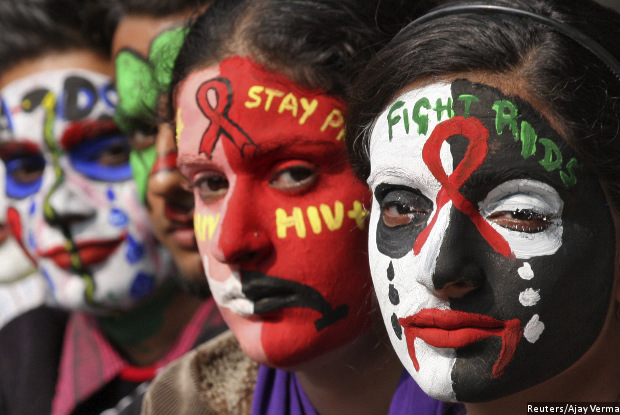 Students pose with HIV/AIDS awareness messages painted on their faces during an awareness campaign in Chandigarh. Only 44% of HIV-infected patients in India are on anti-retroviral therapy--a cocktail of drugs to prolong their lives and reduce infections--according to the health ministry.

Each of an estimated 2.1 million Indians infected with the human immunodeficiency virus (HIV) should be getting a cocktail of drugs to prolong their lives and reduce infections, but no more than 44% do, the minister of health told the Lok Sabha (parliament's lower house) in April 2016.

In India, the drug cocktail is given to patients with a count of less than 350 CD4 cells per mm3 of blood--CD4 cells are white blood cells, a count of which indicates the health of a person’s immune system.

The health ministry said 940,000 (70%) of 1.3 million HIV-infected patients with a CD4 count less than 350 are on anti-retroviral therapy (ART). The situation is worse among children, with no more than 36% getting ART.

ART are drugs that--when taken in combination--can stop the HIV virus from growing, slowing the disease. They do not kill or cure the virus.

A World Health Organization (WHO) guideline says everyone with HIV should get anti-retroviral (ART) drugs, regardless of their clinical stage and a white-blood-cell tally that India uses to determine who will be treated.

An early start to ART is associated with reduced mortality, morbidity and HIV transmission outcomes, according to the WHO.

India has fewer HIV cases than only South Africa and Nigeria. In South Africa, 48% of HIV patients get ART, in Nigeria 24%, according to 2016 data from UNAIDS, a United Nations programme on HIV/AIDS.

The evidence also suggests that “untreated HIV infection may be associated with the development of several non-AIDS defining conditions (including cardiovascular disease, kidney disease, liver disease, several types of cancer and neurocognitive disorders) and that initiating ART earlier reduces such events and improves survivals”, according to the WHO.

Chances of getting these diseases fell 57% among HIV-positive patients treated early, according to a study called the Strategic Timing of Antiretroviral Treatment, conducted among more than 4,500 people across 35 different countries, between 2011 and 2016, by the International Network for Strategic Initiatives in Global HIV Trials, a US-government-funded research organisation.

Children and HIV in India: Two-thirds don't get ART

Ahmed, 5, and Saba, 6--names changed to protect identities--have been HIV-positive since they were born. Their mother transmitted the virus to them; 3% of HIV infections are passed on by mothers to foetuses or infants before, during or after birth, according to government data.

“Infants and young children living with HIV have an exceptionally high risk of poor outcomes, with up to 52% of children born and living with HIV dying before the age of two years in the absence of any intervention,” said the WHO. "By five years of age, the risk of mortality and disease progression in the absence of treatment falls to rates similar to those of young adult.”

Ahmed and Saba are among 33 children living at the Desire Society in Mumbai, a shelter for children with HIV, set up 11 years ago by Babu Ravi.

The organisation has now spread to five Indian cities and houses more than 300 HIV-positive children. All follow a strict protein-based diet to strengthen their weakened bodies, and they all receive ART drugs.

Chandigarh has 146% of HIV-AIDS patients on ART--many of whom likely to be from the adjoining Haryana, the state with the lowest ratio of HIV population to ART centres, thus explaining the 146% figure--followed by Meghalaya with 82% and Mizoram with 73%, according to 2016 government data.

At the bottom is Tripura with 2%, preceded by Sikkim and Arunachal Pradesh with 14%,

There are 455 ART centres nationwide, according to the same government data. Maharashtra leads with 68 centres, followed by Karnataka with 63, Andhra Pradesh with 55 and Tamil Nadu with 51.

More than 37 million live with AIDS--the syndrome due to HIV virus--across the world, a 10% increase from 2010.

“The world has committed to ending the HIV epidemic by 2050," said this 2015 UNAIDS statement. "Expanding ART to all people living with HIV would avert 21 million AIDS-related deaths and 28 million new infections by 2030.”