Which ‘Third Front’ Group Could Form India’s Next Government? 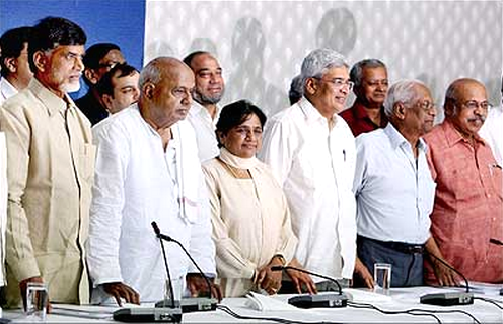 2013 had been a disappointing one for the Congress in all state elections except Karnataka. The elections in the National Capital Territory (NCT) of Delhi were a disaster for the incumbent Congress Government after it lost after three consecutive terms.

BJP, on the other hand, had a rebound year after Karnataka. While they held on to power in Madhya Pradesh and Chhattisgarh, they won the polls in Rajasthan.

But national elections are not only about the national parties anymore as reported earlier by IndiaSpend. Regional issues and state parties have a major role to play. And some state leaders like Tamil Nadu Chief Minister Jayalalithaa, it is believed, are harbouring dreams of becoming the Prime Minister.

While the emergence of a multi-party system in India is healthy for the process of democratisation, it may not be very good for parliamentary stability in national politics. Coalition Governments have lasted full terms only in the past three Lok Sabhas, and these were led by the big national parties.

The advent of Delhi’s Aam Aadmi Party (AAP) has changed the scene for both Congress and BJP as was clear from the recently held assembly elections in NCT of Delhi. The greater the number of parties with a strong hold on public opinion, the higher may be the chances of a repeat of 1996 when a “Third Front” formed the first Government in India. So, there is also a “Third Front” that may be in the making for the forthcoming elections.

The Lok Sabha or lower house of Parliament has 543 constituencies and each constituency elects one representative to the House. Ten states of India account for 399 seats in the Lok Sabha. If state parties are able to win some of the seats of the national parties, it becomes a game changer for the bigger blocs. Here is a list of the top 10 states with the highest number of seats in the Lok Sabha:

In an earlier article, IndiaSpend had reported on the effect of state politics on the national elections.

We had mapped how, in many states, ruling parties also manage to get maximum seats in the national elections. For example, the assembly elections in Andhra Pradesh were held in April 2009 followed by the general elections in five phases in April-May 2009. While Congress won the assembly polls, the party also won the majority seats during the Parliamentary elections that followed the state elections.

Considering that equation, plus the history of how many seats each party holds in the top 10 states, the “Third Front” probables can be worked out. Let us take a look at the Lok Sabha numbers for the major parties in these 10 states: 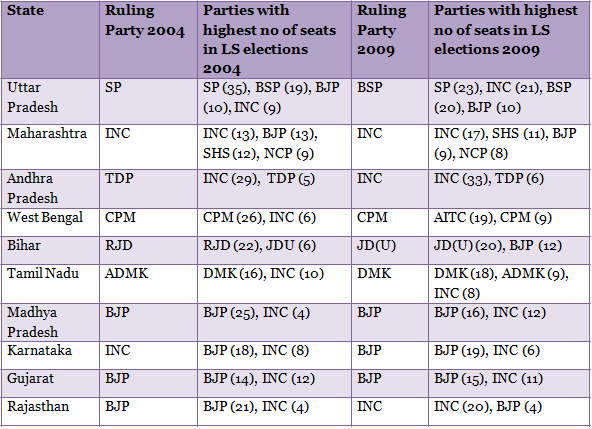 Though a national party, BSP has won seats only from Uttar Pradesh, and hence can be said to have a strong base only in UP. CPM is another national party in the list of the “Third Front” parties. CPM has lost its influence in West Bengal in the last state election where it ruled from 1977 to 2011. Also, in the previous Lok Sabha elections, CPM lost 17 seats.

The United Front in 1996 was a coalition with Janata Dal, which had only 46 seats, as the leading party. There were 12 other parties that were their allies plus there was the Congress support from the “outside”. (“Outside support” implies that a party supports the Government in the legislature but does not seek to be in the Council of Ministers). The major drawback of this arrangement is the inherent conflicts between the parties. If a group is unhappy with the decisions, they withdraw support and the Government falls.

The strong anti-incumbency wave in the country was clear in most of the state elections held in 2013. But NCT of Delhi is facing a constant tussle as the AAP Government does not have a clear majority. Their biggest election rival, Congress, is the one supporting them even as their other supporters are threatening them. So, may be, the position in NCT Delhi could be reflected in the Lok Sabha after the next polls.