Where COVID-19 cases are declining, or resurging

After reporting no new cases for 8 days, Andaman and Nicobar islands reported 16 new cases in the last eight days with at least one case reported every day. Several states have similarly detected more cases, after a steady fall.

The first COVID-19 case in the Andaman and Nicobar Islands was detected on March 26 and within a week, nine more cases were detected. Over 17 days till March 17, one more case was detected, while 10 of the patients were discharged. Active cases reduced to one and stayed there for a week. 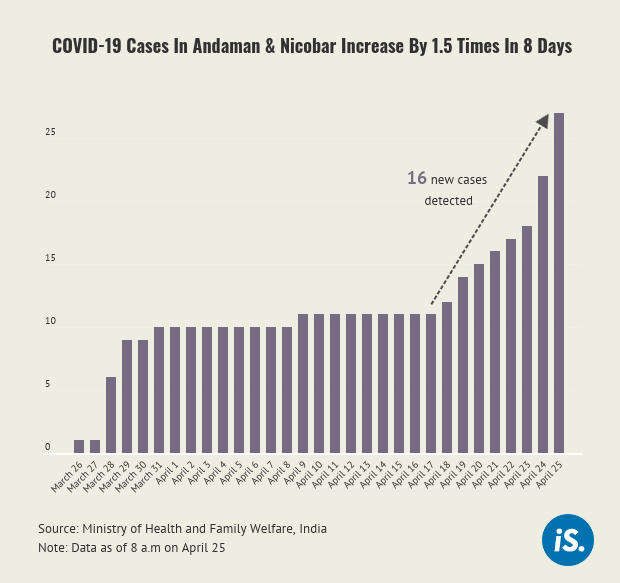 The recently constituted union territory Ladakh reported two new cases after an 8-day gap. 14 of the 20 patients in Ladakh have recovered and 6 are undergoing treatment.

As of 8 a.m. on April 25, 24,506 COVID-19 cases were detected across 32 states and union territories. In 3 states--Goa, Manipur and Arunachal Pradesh--active cases have reduced to zero.

Goa and Manipur, which became COVID-free on March 20, have not reported any new cases. Neither has Arunachal Pradesh, which discharged its only patient on March 21.

Kerala, which reported the first COVID-19 case in India on January 30, has more discharged patients than those under treatment. Active cases in the state reduced from 267 on April 7 to 101 on April 22. On April 23 and 24, active cases increased by 10 per day and reduced by five on April 25.