When It Comes To Rape, Familiarity Breeds Danger 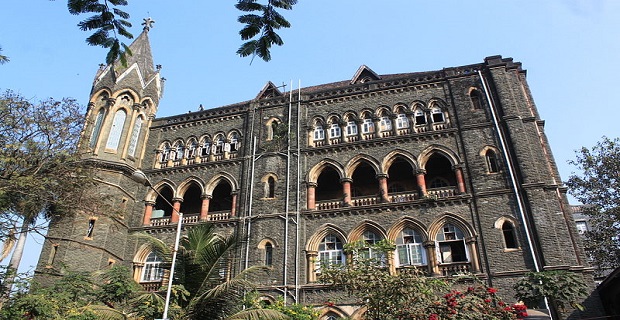 India is seeing an increasing number of cases of rape where the offenders were known to their victims. This is not a phenomenon confined to India but this happened in 98% of the 24,923 rape cases registered in India last year.

Incidentally, in the USA, among victims aged 18 to 29, two-thirds had a prior relationship with the offender, according to the National Institute of Justice. In the UK, around 90% of victims of the most serious sexual offences in the previous year knew the perpetrator compared with less than half for other sexual offences, according to a study by Home Affairs and Ministry of Justice. In South Africa, 35% of the offenders were known to victims, according to a study by Statistics South Africa.

Madhya Pradesh has registered 18,911 cases involving offenders known to victims since 2007. Rajasthan saw a 73% jump in such cases since 2007. Some other states that have a high number of such cases are Uttar Pradesh, West Bengal and Maharashtra. 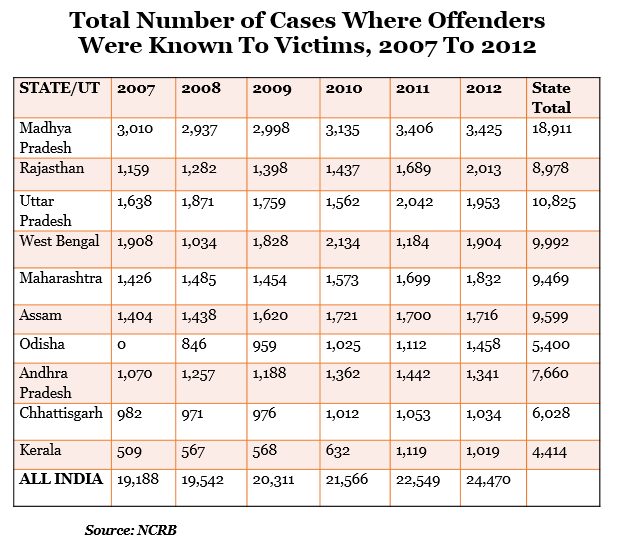 The state-wise data breakup is only to show the geographic distribution of cases. It’s likely that higher numbers only mean that the victims feel more comfortable with their local justice system. We will come to that later.

Meanwhile, Madhya Pradesh had the largest number of cases where the offenders were known to victims with 3,425 cases, and a majority of these cases involved offenders who were neighbours of the victims. 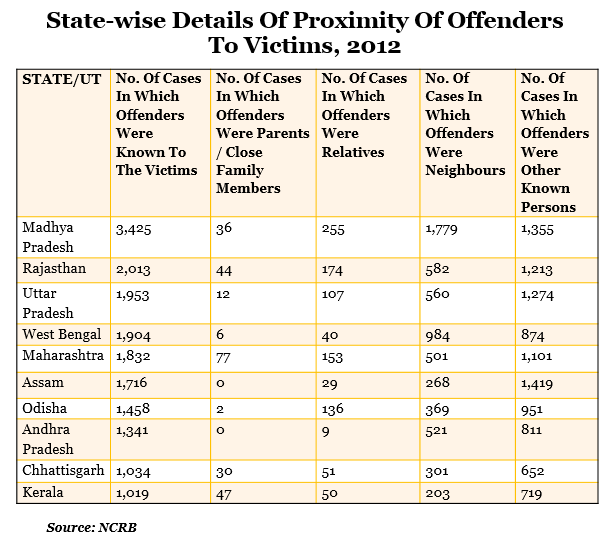 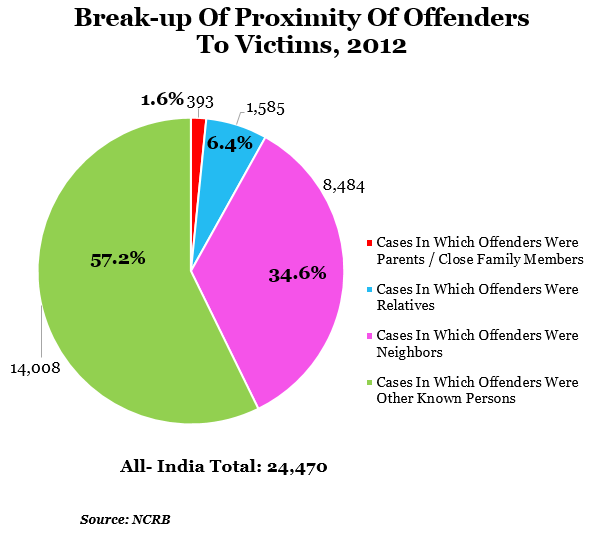 In 2012, Mizoram reported 19 cases of rape per 100,000 women where offenders were known to the victims, which is the highest in the country.

All over the country, in 2012, 4 cases were registered per 100,000 women where victims knew their offenders. 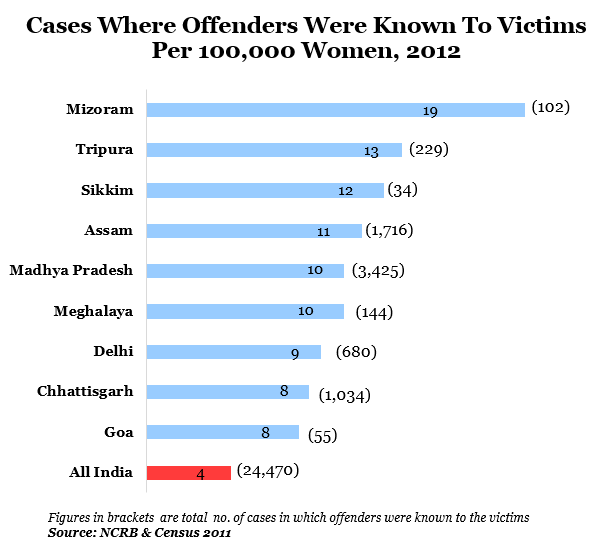 In 2012, 1,978 cases of rape were registered where the offenders were parents/close family/relatives of the victims. Here again, Madhya Pradesh had the highest number of cases though the number declined from 2011 to 2012. 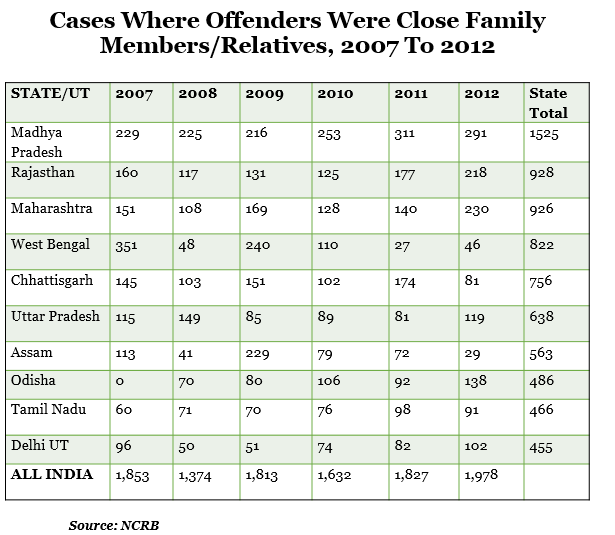 Assam, the only North East state in the table below, is showing a decreasing trend as well. In 2011, 418 cases were registered in the state; this has decreased to 268 in 2012. 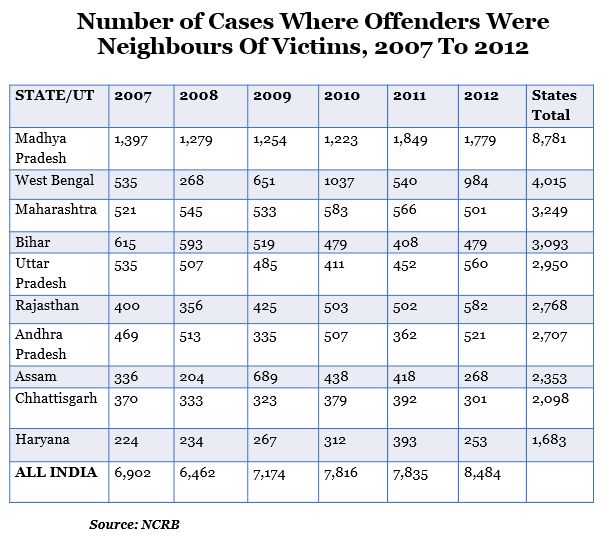 A total of 14,008 cases where offenders were known to the victims but who were not close relatives or neighbours were registered in 2012. This number has increased by 34% since 2007 when the number of such cases was 10,433. 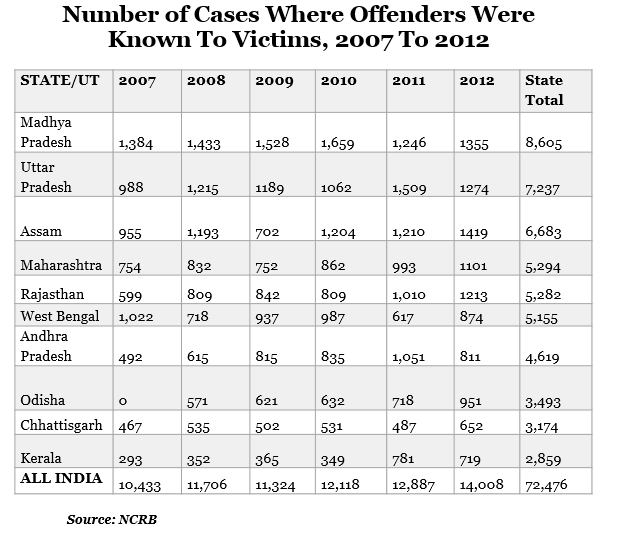 IndiaSpend spoke to Dr Sunita Krishnan, a women’s right activist and founder of Prajwala, an organisation working for anti-trafficking of women and children. According to her, a majority (more than 75% by her reckoning) of cases of sexual abuse and violence is perpetrated by close relatives- fathers, brothers, uncles, neighbours, friends and so on… and this has always been the case.

Dr Krishnan also pointed to the oft-mentioned proviso – that it’s the reporting of cases that’s rising and not so much the number of rape cases in itself, at least proportionately.

“The increasing numbers of cases is due to increased visibility and reporting but for every one case that is reported, 20 cases are not.”

She also warned against interpreting state-wise data in this case. “If numbers in some states are lesser than others, it does not mean that there are less cases of rape by offenders known to victims; it is merely because the state has not improved their law enforcement agencies and justice system compared to states with higher registered cases.”

Perhaps the increased reporting is helping or will help address the problem better. Equally the awareness of the dangers and where they lie is a good first step.