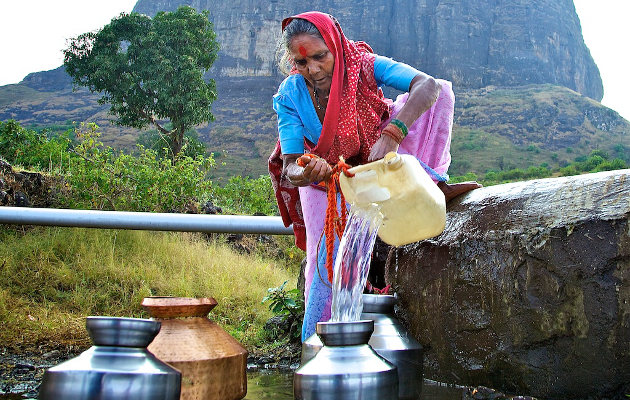 A woman next to a well collecting water the old-fashioned way in Methgharkila village near Nashik, Maharashtra. Image: Flickr/Michael Foley

Local governments spend most of their money on the upkeep of roads and bridges, water supply, buildings and community assets, street lighting, sanitation, water drainage and solid-waste management, but a breakup reveals spending imbalances.

Every panchayat spent Rs 189 per capita on an average—between 2007-08 and 2012-13—on roads and Rs 130 per capita on community assets, according to our analysis of panchayat budgets. This is likely to increase.

Little money is being spent on water supply (Rs 73), sanitation (Rs 24) and other services like streetlights (Rs 10), according to the study.

As we previously reported, money allotted to villages for self-governance is set to triple over the next five years, according to a study by Accountability Initiative, a New Delhi-based think tank.

The top five states with the highest financial decentralisation in India are Kerala, Karnataka, Maharashtra, Tamil Nadu and Chhattisgarh, according to a study by the Ministry of Panchayati Raj on devolution to local bodies in villages.

However, the panchayats in these states are not among the top spenders.

The highest-spending rural bodies are in Tripura. Its per capita spending is almost double that of states with more money and financial powers.

Tripura tops the list due to low population and the increase in tax revenues of panchayats.

The spending patterns are based on the study of panchayat budgets before the recommendations of the 14th Finance Commission were put in place.

What the 14th Finance Commission recommended

The grant is for basic services, such as sanitation, drinking water and maintenance of community assets. Panchayats must ensure basic services reach everyone, including the most marginalised sections of society, the Commission said.

The panchayats, according to the 14th Finance Commission, will receive the two types of grants from states: basic grants and performance grants.

Performance grants are for panchayats that submit audited annual accounts and increase revenues over the preceding year.

Money allocated for rural India has increased, but the Accountability Initiative study has indicated that data on expenditure of panchayats is not adequate and inconsistent.

(You can read the first part—Money For Rural India From Delhi Triples—of this two-part series here.)