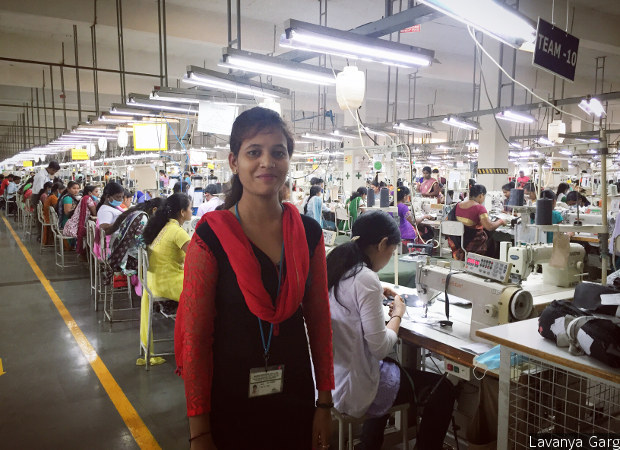 In 2014, Dolly Kumari, then 19, left her home in Jharkhand, to a new job as a tailor at a garment factory in Bengaluru. Today, Kumari is one of two assistant line supervisors on the factory floor, overseeing the work of 119 tailors. Much of her success is due to Personal Advancement and Career Enhancement, a life-skills training programme.

In 2014, Dolly Kumari, an outspoken 12th class pass, left her home in Jharkhand, journeying about 2,000 km south to a new job as a tailor at a garment factory in Bengaluru. Like most workers in this sector, when she first came, she did not think of staying beyond a few months. Today, over two years later, at 21, Kumari is one of two assistant line supervisors on the factory floor of Shahi Exports Pvt. Ltd., overseeing the work of 119 tailors. Her salary has risen 66%, from Rs 5,000 to Rs 8,300 per month. She talks easily of time management and effective communication, and hopes one day to become a floor-in-charge.

Much of her success, she says, can be attributed to a life-skills training programme called Personal Advancement and Career Enhancement, or P.A.C.E., designed by Gap Inc., a clothing multinational. Through two-hour sessions every week for 11 months, conducted by qualified P.A.C.E. trainers, the programme taught Kumari how to, among other things, manage her time productively and communicate effectively.

In 2011, three US-based economists--Achyuta Adhvaryu, Namrata Kala, and Anant Nyshadham--conducted a randomised controlled trial (RCT) at a few Shahi factories in Bengaluru, to ascertain the impact of P.A.C.E. The research found that nine months after programme completion, the net rate of return to her company’s investment in her job and life skills was more than 250%.

Cited by former US President Bill Clinton as an idea that is changing the world, in this 2012 TIME magazine article, the programme has trained 58,938 garment workers worldwide (including 26,600 in India, where it first began in 2007).

It contributes uniquely to the Indian government’s Skill India initiative, and indicates how workers can achieve new skills and companies can increase profits in a sector that can be critical to India’s economic growth. In recent times, this sector, as IndiaSpend reported on July 30, 2016, has been witnessing plateauing job growth and wilting export volumes. However, with rising labor costs in China ($3.52 per hour in manufacturing compared to India’s $0.92 per hour in 2014), as Bloomberg reported in November 2014, India stands to gain from this competitive advantage. In this context, the P.A.C.E. programme has the potential to change how the garment industry recruits, skills, and retains female workers.

India’s textiles and apparel sector is the country’s second-largest employment provider, after agriculture. In 2015-16, textiles and apparel directly and indirectly employed 105 million people--13 times more than the information technology sector or equivalent to the population of South Korea--and constituted 15% of India’s export earnings.

Every investment of $0.15 million in the apparel sector generates between 56 and 84 jobs, compared with an average of six jobs across all industrial sectors, according to government statistics.

Textile and apparel factories also play a crucial role in skilling and employing women: While female labour-force participation in India has fallen over the decade ending 2015, as IndiaSpend reported on March 8, 2016, this sector has consistently generated more jobs for women than any other sector. 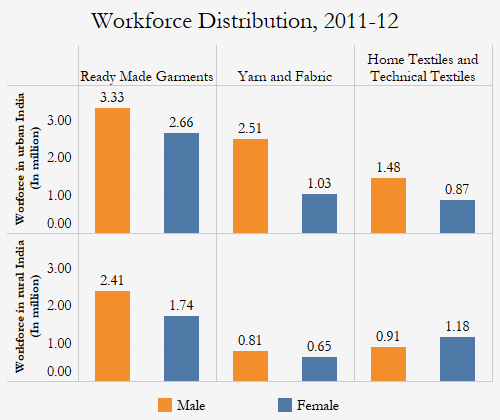 The organised apparel segment is expected to grow at a compounded annual growth rate of more than 13% over the next 10 years, according to this 2016 report from the India Brand Equity Foundation, a government-run trust.

In view of these statistics, and the potential for the garments sector to absorb even larger numbers of female workers, the researchers asked: How can garment firms be better incentivised to promote the wellbeing of their workers?

How Shahi Exports and its workers benefitted from life-skills training

P.A.C.E. was piloted in 2007 in Shahi factories, which now cumulatively employ more than 110,000 people. In 2012, Adhvaryu, Kala and Nyshadham evaluated the impact of the programme at five Shahi factories in the Bengaluru area.

The RCT covered 2,703 workers who had expressed interest in the programme, of which about 1,000 were randomly chosen to participate and the remainder allocated to a control group, which did not receive the training. 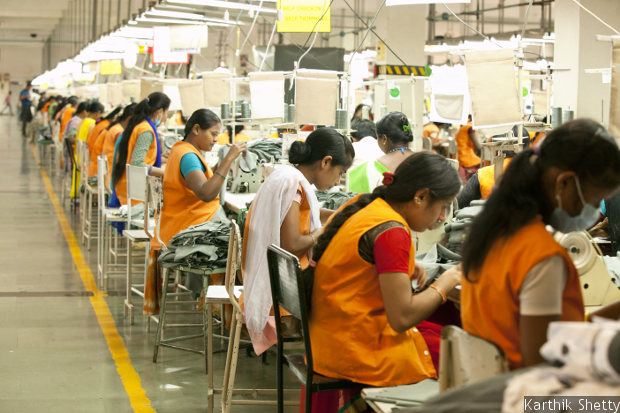 A production line of Shahi Exports Pvt. Ltd. in Bengaluru. P.A.C.E., a life-skills training programme, was piloted in 2007 in Shahi factories, which now cumulatively employ more than 110,000 people.

The cumulative costs of the programme to the company plateaued at $90,285 (Rs 61.45 lakh) at the end of 11 months since it started, while the gains continued to increase even after this period, standing at $321,145 (Rs 2.18 crore) at the end of 20 months. The low cost of administering the programme combined with the gains in productivity and person-days (a measure of factor manpower) explain its potential (click here for calculation of return on investment).

Workers who received such attention were more likely to enrol in skill-development training at the company, to save for their children’s education and to utilise state-sponsored pension and health care schemes. They also had higher self-esteem and displayed more sociability.

The experiment is unique in that it demonstrated that skill-development programmes delivered through companies have the potential to be profit-generating engines that also promote worker wellbeing,

Providing training in life skills to women does not just make them more productive employees; it also creates lasting changes in women’s domestic lives and increases their effective wage, because skilling is an in-kind transfer from the firm to the worker. 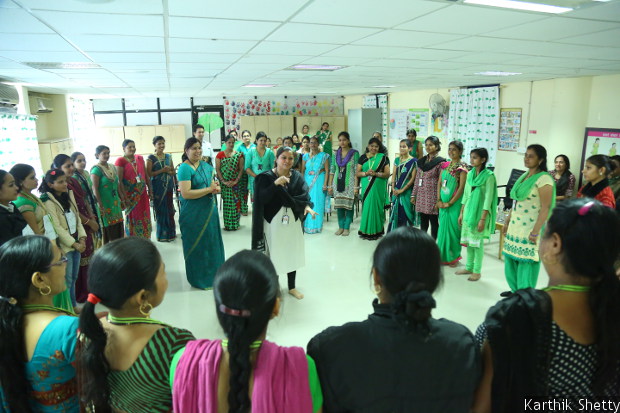 A training session under a life-skills training programme, P.A.C.E., underway at Shahi Exports Pvt. Ltd., Bengaluru. Through two-hour sessions every week for 11 months, conducted by qualified P.A.C.E. trainers, the programme teaches workers how to, among other things, manage time productively and communicate effectively.

Propelled by the positive results of this and other similar studies in the past five years, two of the researchers--Adhvaryu and Nyshadham--along with the head of organisational development at Shahi, Anant Ahuja, founded The Good Business Lab in March 2017. Funded through corporate social responsibility and research funds, the aim of the lab is to incubate, evaluate and disseminate P.A.C.E. and other research findings that benefit workers and generate profits.

P.A.C.E. study has had a cascading effect

The results of this study have helped to inform Gap Inc.’s latest global expansion of the P.A.C.E. programme, as well as contributed to Gap Inc.’s licensing of select firms such as Shahi, to expand P.A.C.E. in their factories or outside factories in community settings.

To date, Gap Inc. has spread the programme across its vendor base in 12 countries, and nearly 60,000 female garment workers have graduated from P.A.C.E.

Back in Bengaluru, Shahi assistant supervisor Kumari, who at 21 has already progressed to a senior level in her factory, said: “P.A.C.E. improved my time-management skills, taught me not to discriminate on the basis of caste and made the overall work environment in the factory better.”

In an industry known for low skills and transience of jobs, Kumari does not want to join any other firm--even if it has a factory closer to home--that does not have a life-skills training programme. She wants to stay at Shahi, move further up the professional ladder, and in the process, motivate other women she lives with to be hard-working and ambitious.

Update: The story has been updated to reflect that the Personal Achievement and Career Enhancement programme has trained 58,938 garment workers worldwide.

(Garg is the Research and Communications Manager at the Good Business Lab.)