At 98, West Bengal has reported the highest number of deaths of COVID-19 patients nationwide--55% of COVID-19 deaths in India--since last evening, as per the health ministry’s 8 a.m. update today. This is the highest increase reported by a state in a day thus far, and makes for the highest COVID-19 case fatality rate in the country, at 10.6%. 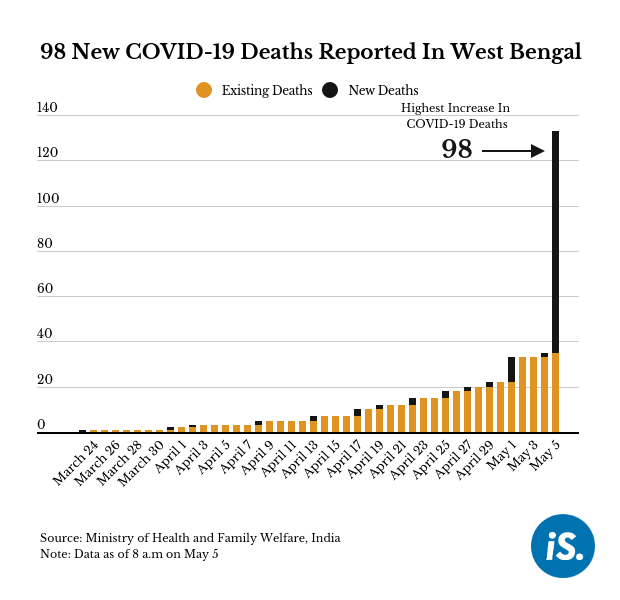 West Bengal has also reported its highest single-day increase in COVID-19 cases thus far, at 296. The number of cases has increased 31% to 1,259. It has also reported 67 new recoveries, taking its active cases to 908.

The state reported a total of 61 deaths due to COVID-19 and 72 due to comorbidity, said a May 4 state government bulletin.

Some states have been persuaded to share cases and deaths data as they had not done so on time, said Lav Agarwal, joint secretary of the health ministry during a press conference on May 5, explaining the increase in deaths. It is important that there is timely reporting and field action, and it has been ensured, in coordination with state governments, that reporting is streamlined, he added, responding to a media query on the spike in West Bengal.

Ten of 23 districts in West Bengal have been designated as red zones, as per the Centre’s April 30 classification for all districts, based on number of cases and infection rate. India had 130 red zones, according to the data.

‘Lack of cooperation’ with central teams

The Centre has been critical of the state’s alleged reluctance to cooperate with central teams that had been deputed to review COVID-19 lockdown measures.

In an April 21 letter to Rajiva Sinha, West Bengal’s chief secretary, the home ministry noted that the two Inter Ministerial Central Teams (IMCT) “have not been provided with the requisite cooperation by the State and local authorities”, and that they “have been specifically restrained from making any visits, interacting with health professionals, and assessing the ground level situation”.

GoI directs G/o #WestBengal not to obstruct working of Central Teams reg. review & on-spot assessment of implementation of #Lockdown2 measures to fight #COVID19 in the State
WB directed to comply with MHA orders & make arrangements for IMCTs to carry out their responsibilities pic.twitter.com/h5nRnszOat

Another letter sent on April 25 to the chief secretary, this time by the IMCT team chief for West Bengal, noted the lack of support from the state, and complained about the state not having responded to four letters sent between April 20, when the team arrived in Kolkata, and April 25.

Cases and samples, and a high case fatality rate

Since April 21, when the home ministry's letter was sent to the state, COVID-19 cases in West Bengal have increased 2.2 times to 1,259, with a daily increase of 62, on average. The state had reported its first case on March 18.

(Both Maharashtra and Gujarat have reported their highest increase in COVID-19 cases, at 1,567 and 376, today.)

West Bengal now has the highest COVID-19 case fatality rate in India, at 10.6%, which is 7.2 percentage points more than the national rate. Among states with at least 1,000 COVID-19 cases, West Bengal is followed by Madhya Pradesh (5.6%) and Gujarat (5.5%) in terms of case fatality.

On April 30, the state chief secretary said there had been 105 deaths but only 33 could be directly attributed to COVID-19, The Indian Express reported on May 5. “We found that the reporting structure of our state was highly complicated,” he is reported to have said on May 4. “All cases were not being recorded properly. We thought the process was dynamic, but it proved otherwise. So, we changed the structure and made a system on real-time data.”

While the state government has to deal with a spike in cases and deaths, its migrant workers and people stranded elsewhere are expected to return, with the easing of lockdown measures from May 4.

More than 2,500 migrants will be brought to the state in two special trains from Ajmer (Rajasthan) and Kerala, “as a part of our promise to bring back citizens of Bengal stranded in other states”, said Chief Minister Mamata Banerjee on May 3.

As a part of our promise to bring back citizens of Bengal stranded in other states, 2 special trains from Ajmer & Kerala would leave tomorrow for West Bengal carrying more than 2500 migrant labourers,pilgrims,students & patients. Everyone coming in to be screened as per protocols

In Kerala, the largest proportion of migrants hail from West Bengal (20%). Sinha has cautioned that migrant labourers “need to be brought back in phases because detailed planning has to be made”. If anyone is travelling “from a containment zone, he or she cannot be sent home”.

Note: The blogpost has been updated to reflect the Centre’s comment on the spike in cases and deaths, and the data released in the state bulletin.