Was Dr Reddy Right In Asking For Caps On Inflows? 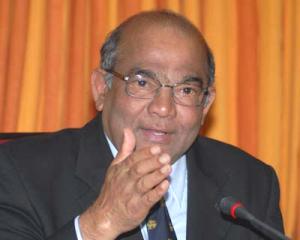 Back in 2004, when India's foreign exchange reserves crossed the $100 billion mark, Planning Commission deputy chairman Montek Singh Ahluwalia proposed using a part of what was then viewed as excess reserves to finance infrastructure projects.

The proposal remained on paper and was abandoned many years later. Reserves, however, continued to balloon, mostly thanks to foreign institutional investors (FII) buying Indian stocks. In early 2005, then Reserve Bank of India Governor Dr Y V Reddy wondered if India should place restrictions on flows of FII money into the country to prevent excessive volatility in the exchange rate.

There was outrage and the markets were suitably spooked though the proposition was widely debated and then opposed. Interestingly, while India debated on how best to use its growing forex pile prior to the global financial crisis, it had no worries about a current account deficit (CAD). Rather, India ran a surplus on the current account between 2001 and 2004. In 2004-05, CAD was less than 1% of GDP.

IndiaSpend analyses how times have changed. Today, foreign exchange reserves stand at about $290 billion, just a little lower than the May 2008 peak of over $310 billion, thanks to some smart diversification by the Reserve Bank of India into gold and various currencies. The hoard is enough to cover seven months of imports. But policy makers, economists and analysts now admit that it may not be enough.

This is because deteriorating merchandise trade balance and muted inflows on service exports and remittance have driven CAD to a historic high 5.4% of GDP in the second quarter of the current fiscal and 4.6% in the first half. Both Finance Minister P Chidambaram and his Chief Economic Advisor Raghuram Rajan have repeatedly said over the past few months that CAD was now a big worry and that India was increasingly dependent on foreign capital – foreign direct investment (FDI), foreign institutional investment (FII)and external commercial borrowings (ECB) – to finance that deficit. 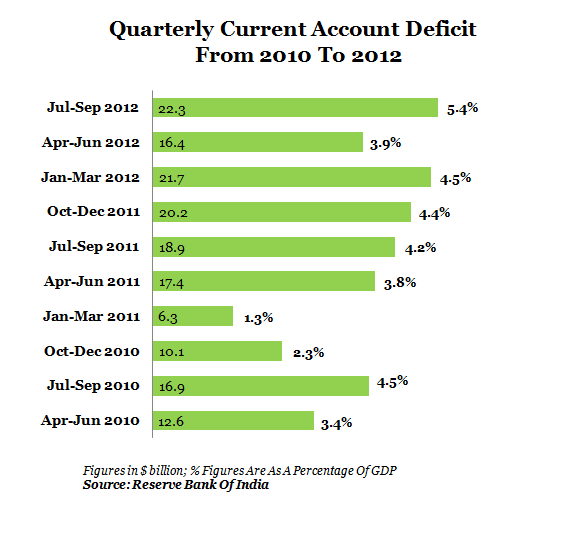 Actually, CAD is now a bigger worry for the government than the fiscal deficit. That's because fiscal deficit can be contained in the short-term through various expenditure compression and revenue boosting measures that are within the government's control. But CAD depends on the performance of the global economy, geo-political environment, demand for Indian products and services overseas and prices for goods and services in the international market.

Demand for Indian exports contracted this financial year as the effects of fiscal stimulus-driven consumption in the US and Europe weakened and Europe's economic woes continued. Imports by India, in contrast, continued unabated, primarily driven by crude oil and gold, even though demand for plant and machinery, among others, contracted with the slowing of the economy. 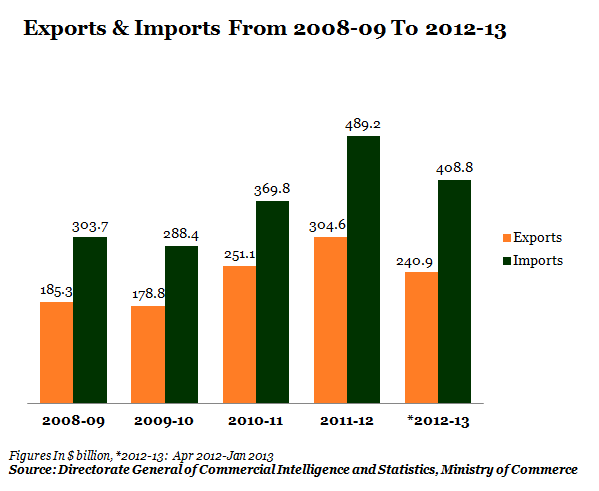 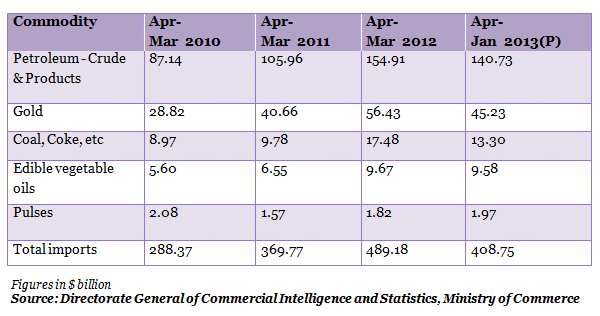 Ideally, exports and imports should balance but that rarely happens. The United States runs a large trade deficit while China runs a large trade surplus. India's need to import crude oil will keep its trade balance under stress. At the end of January, India's merchandise imports this fiscal were about 70% more than its exports. The mismatch in growth of exports and imports has led to the widening of trade deficit. 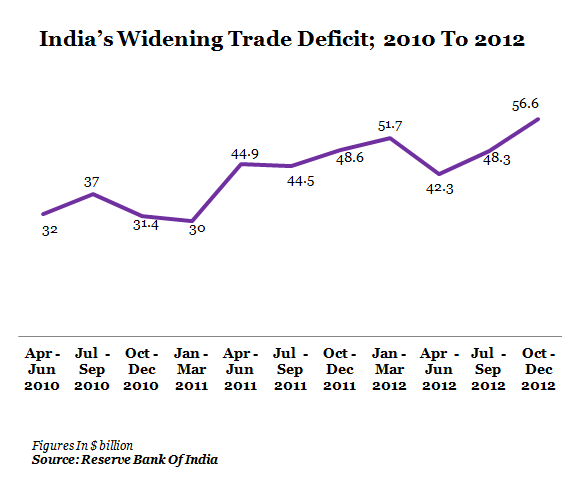 Besides merchandise, countries also trade in services. For instance, India earns a significant amount from export of I-T software. Likewise, several other services are outsourced to India and that becomes a source for earning foreign income. Natives go to work in another country and send home a part of their earnings as remittances. Companies invest in other countries and earn dividend or interest on their investments, which they repatriate home. All these together make up what is known as invisibles.

In the boom years, India's earnings from invisibles were very robust. But the slowdown in the West put pressure on India's software earnings. Earnings on investments in the form of interest and dividend are far lower than what foreign companies take out of India. As the result, earnings on invisibles are not enough to cover the trade deficit. So, India runs a current account deficit. CAD could have looked worse had remittances and other transfers also weakened. 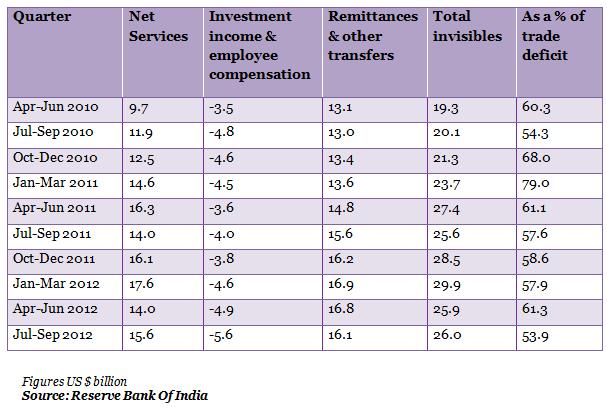 The widening CAD increases India's reliance on capital flows as the Finance Minister said in his Budget speech and in interactions thereafter. Capital inflows in the first half of the year at about $41 billion were just adequate to finance CAD.

This compelled the Finance Minister to mention in his Budget speech that India does not have a choice between welcoming and spurning foreign investment at this juncture. 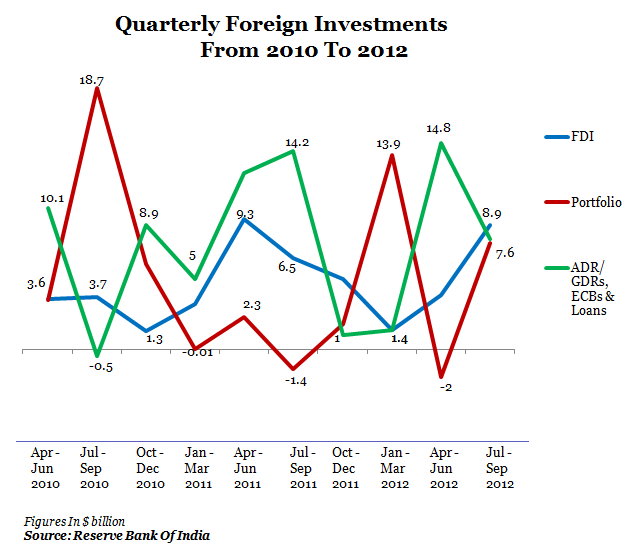 FDI is the most preferred form of foreign capital inflow because it is not just long-term but also results in transfer of know-how, technical expertise and knowledge sharing that helps improve efficiency in use of resources. Over the years, with Indian companies acquiring assets overseas, outflows have increased. So, to avoid any pressure, India needs to attract more FDI into every possible sector.

Allowing companies easy access to external commercial borrowings (ECBs) is not without risks as the Finance Minister has pointed out: allowing companies that do not earn some part of their revenues in foreign currency would put pressure on the country's forex reserves when repayments come up and also lead to volatility in exchange rates.

Clearly, India needs more medium- and long-term capital to finance its CAD in the short- to medium-term and prevent another 1991-like balance of payment crisis. But in the long term, exports need to finance greater proportion of imports. That can happen only when the composition of India's export basket changes to include more value-added and manufactured products rather than semi-finishes products and agri produce. So, will the Foreign Trade Policy to be announced soon contain enough measures to boost exports?

The policy also needs to address supply constraints that forces imports of essential commodities and food items. For instance, why should India, with the world's largest reserves of coal, import it in huge quantities? Policy changes to incentivise cultivation of pulses and oilseed can reduce India's need to import these products.

Lastly, import of gold, a factor weighing on balance of trade and current account, will decline only when Indians find other equally attractive assets, both physical and financial, to invest in and thus protect and grow their wealth....