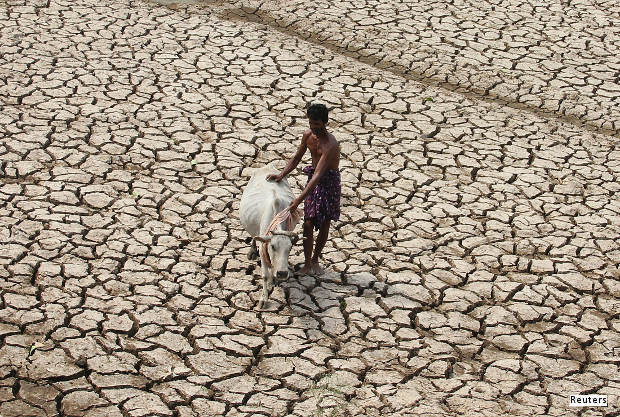 Particularly so for a country like India which is likely to have a greater economic impact as prosperity rises in the coming years.

“The threat to India will be higher just as the economic impact will be higher because we will be a richer country. Whether coastal flooding or crop damage, we have to start gearing up for the risk,” Dr Arunabha Ghosh, CEO of the Council on Energy, Environment & Water (CEEW) and the Indian author of the study, told IndiaSpend.

The study was initiated by Sir David King, former chief scientific advisor to the UK Government in October 2014, and reflects the combined efforts of the Harvard University Center for the Environment, Energy Research Institute of the National Development and Reform Commission, Tsinghua University, China & India’s CEEW.

Consider some of the scenarios the report lays out:

Heat: Hot countries are already increasingly witnessing unsafe working conditions for short periods while fatalities because of heat waves are rising. In future, climatic conditions could exceed potentially lethal limits of heat stress even for individuals resting in the shade. Parts of the world like northern India, southeastern China, and southeastern USA might be affected more. IndiaSpend had earlier reported how longer, stronger heat is predicted for India.

Crops: With limited tolerance for high temperatures, yields may be drastically reduced when critical thresholds are exceeded. The probability of crossing such thresholds in a given year, for maize in the Midwestern US and rice in southern China, appears to rise from near zero at present to become increasingly significant with a global temperature rise of more than 2°C, and in the worst cases to reach somewhere in the region of 25% (maize) and 75% (rice), respectively, with global temperature rise of around 4-5°C.

Water: The number of people exposed to extreme water shortage is projected to double, globally, by the middle of the century due to population growth alone. Climate change could increase the risk in some regions: for example, on a high-emissions pathway, the probability of the Tigris-Euphrates river basin falling into extreme water shortage could rise significantly after 2030, reaching close to 100% by 2070.

Defences can be upgraded to maintain the probability of a flood at a constant level but this will be expensive, and the losses from flooding will still increase, as the floods that do occur will have greater depth.

How could a risk assessment help? From an Indian perspective, the country has become one of the top polluters in the world. India consumes 421 million tonne of energy, the fifth largest in the world. It ranks fourth in CO2 emissions with 1,146 million tonne of CO2 into the atmosphere. However, when ranked by per-capita emissions, India’s CO2 emissions stand at only 1.18 tonne.

There has been an impact of the increased CO2 emissions with a rise in temperatures.

Mean temperature in India has increased from 24.2 degrees in 1901 to 24.6 degrees in 2012, according to data released by the Ministry of Earth Sciences. Though the increase is not major, it must be remembered that even a 2-degree rise in temperature may cause global sea levels to rise 10-15metres as ice-sheets melt gradually.

Until 1985, only 35% of total land was affected due to drought. Since then, almost 50% of land has become affected by drought. And many of these droughts are severe.

“The amazing thing about the Indian summer monsoon is the large effect of a small variation from one year to year: 10% more rainfall and there are floods, 10% less and there are huge problems for farmers,” according to Brian Hoskins of Bristol University.

This could be due to the fact that 60% of Indian agriculture is rain-fed.

Heat waves are getting more dangerous as mentioned earlier. Heat waves have claimed the lives of 5,869 people between 1998 and 2008, according to data from India’s Ministry of Home Affairs.

In northern India, there is a 30% probability that temperatures will be so high that moderate/heavy outdoor work cannot be carried out in the hottest months, according to the study.

The study argues that all this points to the need for better preparedness for climate change. More specifically, how can countries like India build infrastructure that will be “reasonably resilient” to these shocks?

In addition to infrastructure, securing food supplies will be another challenge.

Dr Ghosh says India needs to look at regional impact as well. “What happens, for example, in Bangladesh and Pakistan is also something that could impact us. There are national security issues, migration issues and thus development issues, among others.”

Evidently, issues like national security as driven by climate change might not be on the radar of most folks, at least so far.

The study further identifies the four key elements, namely emissions (risks of increase / decrease in emissions), direct risks (direct impact of rise in temperature on crops and lives lost), systemic risks (such as migration and security risks) and value (to assess the economic impact of climate change on the economy and its resources).

The risk assessment should involve a wide range of experts. The assessment of climate change risks should involve a lot of key stakeholders and not just scientists. Governments should consult energy specialists, military strategists, economists and so on.

Looking at the impact of climate change, risk assessments carried out should be conveyed to all departments of the government including the prime minister’s office.

“India needs to start looking at climate change and climate risks from a medium- and long-term perspective, and not just as an issue of negotiation or short-term development challenges. We need to start thinking of risk of climate change rather than averages of climate change,” according to Dr Ghosh.