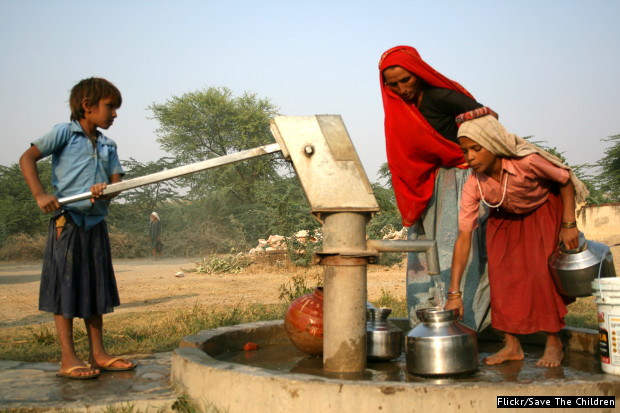 About 86% of Indian households have access to "safe drinking water", according to official data, yet diarrhoea—associated with contaminated drinking water —is common across India and is responsible for 10% of all deaths among children under five, according to the World Health Organization.

The definition of "safe drinking water" explains this conundrum and helps the government exaggerate the numbers: The census considers water supply from handpumps and tubewells as safe as piped drinking water, although these sources are carriers of water-borne diseases.

Caused by a host of bacterial, viral and parasitic organisms--most spread by water contaminated with faeces--diarrhoea is closely associated with lack of access to safe drinking water and poor sanitation. In South Asia, only Afghanistan and Pakistan do worse than India in the proportion of child deaths caused by diarrhoea.

Diarrhoeal diseases are the most prevalent of all water-related diseases in India, worsening every monsoon because of increased flooding and the mixing of sewage with drinking-water sources.

About half of India's households do not have access to sanitation facilities, and this is a major cause in the continuing prevalence of diarrhoeal disease as it can lead to contamination of drinking water sources.

A higher prevalence of diarrhoeal diseases is linked to unimproved toilet facilities within a household, according to this analysis of census data. "Unimproved toilet facilities are flush/ pour latrines routed into the open rather than enclosed with pipes or septic tanks, pit latrines without slabs or cover, "night-soil"—a euphemism for human excreta—routed into open drains and service latrines with "night-soil" removed by humans or animals. All these can lead to unhygienic conditions thus increasing the risk of contamination and diarrhoeal diseases.

It is clear that providing toilets is not enough to combat diarrhoeal disease. What appears to be more important is the availability of improved, working and hygienic toilets with better mechanisms to dispose the sewage, so it does not contaminate the environment and water sources.

(The story has been updated to reflect the fact that the data is based on households and not population as mentioned in an earlier version.)

"Liked this story? IndiaSpend.org is a non-profit, and we depend on readers like you to drive our public-interest journalism efforts. Donate Rs 500; Rs 1,000, Rs 2,000."