Bengaluru: Although India’s upper caste households earned nearly 47% more than the national average annual household income, the top 10% within these castes owned 60% of the wealth within the group in 2012, as per a recent paper by the World Inequality Database.

The vast inequality of income and wealth between and within castes highlighted in the paper are significant in the light of the Bharatiya Janata Party government’s new bill to entitle poorer sections among the forward castes to a 10% quota in government jobs and higher education institutions, which has been challenged in court.

Not only is the wealth and income gap large, it is growing--across all castes, in the 36 years till 2016, the share of wealth held by the top 10% has increased 24 percentage points to 55%, as IndiaSpend reported on January 2, 2019.

On January 9, 2019, the Indian parliament approved the Constitution (124th Amendment) Bill to provide 10% reservation in government jobs and higher education institutions for economically weaker sections of the general category of citizens. These are families that do not belong to SC, ST or OBC categories, and earn less than Rs 800,000 annually, own less than 5 hectares of agricultural land and own residential properties smaller than 1,000 sq.ft.

Eligibility will be based on: 1) income < Rs 800,000/yr (less than Rs 66,000/month), equivalent to the salary of an entry-level bureaucrat (IAS officer) or senior software engineer/ developer/ or programmer. #Reservation

2) Agri land < 5 acre which includes small, marginal, medium & semi-medium holdings that collectively account for 89% of agricultural holdings. Large holdings that account for 10% of agri-land & which declined almost 11% between 2001-2010 not covered. #Reservation

The new 10% #reservation will be over and above the existing reservations & will not affect the quota for scheduled castes/scheduled tribes/other backward castes, according to news reports.

The proposed bill, to be introduced tomorrow, will amend Articles 15 & 16 of the Constitution as the 10% reservation exceeds the #SupremeCourt limit of 50% on quotas. #Reservation

Critics have already pointed out that the move announced towards the end of the winter session of Parliament means it would not be cleared soon. https://t.co/yp1v4o7CFw https://t.co/6Pg8MKrH6V https://t.co/3nVGX11iIW #Reservation

Based on the World Inequality Database, the paper combined data from wealth surveys, the National Sample Survey-All India Debt and Investment Survey (NSS-AIDIS), and millionaire lists. It used the censuses, the NSS-AIDIS and the Indian Human Development survey to explore the evolving relationship between class and caste in India.

“Economic ranking follows caste hierarchy, making caste a valid stratification in the society,” the paper noted. “It is important to keep in mind that the standard deviation is also very high in FC groups, i.e. not all are well off in that group. The clustering of social groups in (sic) not perfect.”

“Caste and class are largely co-terminus with few exceptions and life-chances in India continue to be based on one's caste position,” A.R. Vasavi, a social anthropologist and independent researcher, told IndiaSpend. “From allocation of resources, to opportunities, to social capital the distribution pattern matches the skewed social structure; those higher in the ranking gain or get better allocations at the cost of denying the majority.”

India is one of the most unequal countries in the world with the top 10% controlling 55% of the total wealth, up from 31% in 1980, according to the 2018 World Inequality report, as IndiaSpend reported on January 2, 2019.

Muslims, while faring better than the SC, ST and OBC population, reported an annual household income 7% less than the national average.

Others (non-Hindu, non-Muslim groups and those who do not fall under the SC, ST and OBC categories) were found to be the richest group, though they make for only 1.5% of the country’s population, the paper said. They earned an annual income of Rs 242,708, twice the annual household income average in India.

“Caste, kinship or family, either or all these can hamper economic progress if they impose restrictions,” Andre Beteille, professor emeritus, department of sociology at the University of Delhi, told IndiaSpend.

Compared to population, wealth held by SC and ST was low

“OBC group owned 32% of total wealth in 2002 which increased only marginally in 2012 resulting in overall worsening of the gap relative to population share (-7.8% to -10.2%), due to considerable increase in their population share,” the paper notes.

The forward caste group share has shown an increase from 39% to 41% in their share in total wealth and improved the gap from by 4 percentage points to 18%.

As mentioned earlier, the forward castes showed the highest (47.6%) increase in wealth among the top 5% of the three caste groups during the decade ending 2012. By 2012, the group’s top 10% owned 60% of the total forward caste wealth.

Share Of Wealth In Top Decile Among FC, SC, ST and OBC 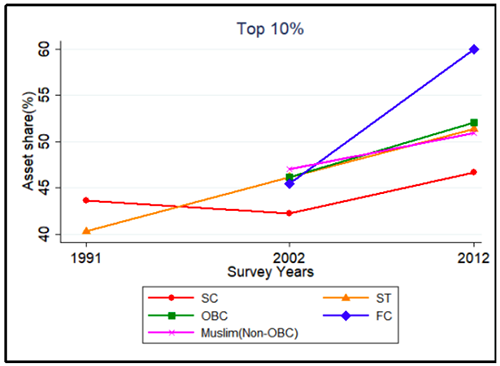 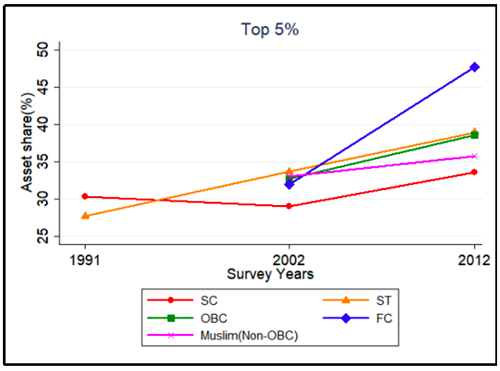 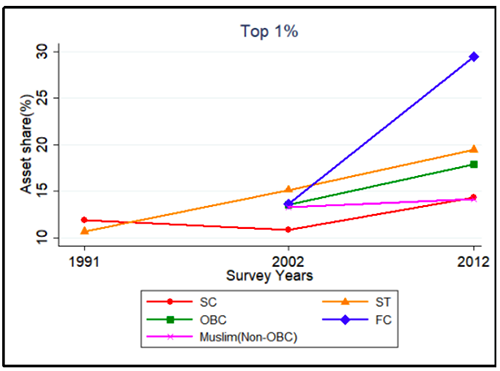 While the exact magnitude of inequality within broad caste groups may vary across the country, a World Bank study on inequality between caste groups in rural Bihar suggests that inequality among sub-castes may be a key driver of economic inequality in India, Livemint reported on July 25, 2018.

Among SCs, for instance, Musahars are much worse off than Chamars and Dushadh (all three belong to castes traditionally engaged in tasks considered menial) in terms of both monthly consumption expenditure and educational attainment. Among OBCs, sub-castes such as Koeris fare badly compared with most Dalit sub-castes, Livemint noted. It did not offer any explanation for this.

“Bottom 50% of the population has lost 2-4 percentage points within all the caste categories. The major decline [has been in the] share in FC followed by ST, OBC and SC and Muslims,” the paper noted.