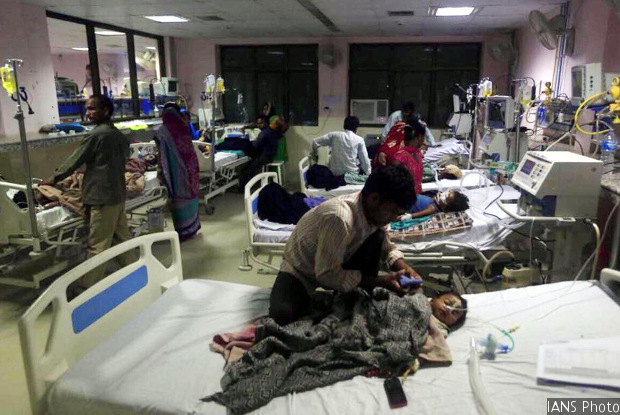 Children admitted at the Baba Raghav Das Medical College hospital in Gorakhpur, Uttar Pradesh. Patients of Japanese encephalitis, the viral brain infection that killed many of over 70 children in BRD Medical College hospital, cannot survive longer than 15 to 20 minutes without oxygen. A leading Indian virologist tells us what’s going wrong in eastern UP.

Health workers are improperly trained, and no more than four in 10 of Gorakhpur’s children have received adequate vaccine protection for Japanese encephalitis (JE)--the viral brain infection implicated for the death of many of over 70 children in Gorakhpur’s Baba Raghav Das Medical (BRD) Medical College hospital, which is a “mediocre” institution serving an area particularly vulnerable to JE.

These are the conclusions of Milind Gore, 62, a former scientist from India’s premier virus-research establishment, the National Institute of Virology (NIV), Pune. Gore moved from Pune to Gorakhpur in 2008--two years after the government launched the first immunisation drive to vaccinate children up to 15 in Uttar Pradesh’s (UP’s) JE endemic areas--to set up NIV’s Gorakhpur unit, which is in the BRD Medical College campus.

An incurable disease whose symptoms must be managed with medical attention until the patient, if strong enough, overcomes the infection, JE is not new to eastern UP, and the NIV unit was set up after the mosquito-borne virus swept through the area, between July and November 2005, infecting 5,737 people and claiming 1,334 lives. It was the longest and most severe JE epidemic UP had seen since the disease first surfaced 40 years ago in 1977.

What makes Gorakhpur particularly vulnerable to JE is its abundance of rice fields in a bowl-shaped landscape that allows rainwater to collect in pools, creating ideal breeding conditions for the JE carrier, the Culex mosquito, which acquires the virus from feeding on infected domestic pigs, the amplifying host, and migratory birds, the natural host. High temperature and relative humidity during the monsoons make the transmission of the virus from the mosquito to humans easier.

“Immunisation is the only way to control JE encephalitis in highly endemic areas like Gorakhpur, and (it) has shown to be effective in reducing JE cases,” Gore told IndiaSpend.

However, immunisation has not reached all of Gorakhpur’s needy children.

In a 2015 survey, only 42.3% of Gorakhpur division’s eligible children had had the two recommended doses of JE vaccination, according to an Indian Journal of Medical Research paper published in January 2017, co-authored by Gore. Poorly informed health workers, who believed the JE vaccination could not be simultaneously administered with the measles and DPT (diphtheria, pertussis and tetanus) vaccinations prescribed in India’s Universal Immunisation Programme, were the main reason for the poor vaccination record. The health workers believed that simultaneously administering multiple vaccinations could overload children’s immune system and increase the risk of side effects, so they asked mothers (or fathers) to return for the JE vaccination. The low coverage suggests that many parents who lived a “hand-to-mouth” existence, as Gore put it, did not return.

Another challenge is that the JE vaccination cannot prevent children from getting acute encephalitis, brain fever caused by other reasons than the Culex mosquito, which this news report suggests killed at least five of the children who died at the BRD Medical College.

IndiaSpend talked to Gore for a firsthand account of the challenges facing the JE immunisation programme, halting the spread of JE in Gorakhpur and ensuring that JE patients are medically cared for.

In 2015, three in four children aged 25-36 months in Gorakhpur division had received at least one dose of JE vaccine, according to your co-authored paper published in the Indian Journal of Medical Research in January 2017. Less than half (42.3%) the children aged 25-36 months had had two doses. And one in three of the eligible children missed the JE vaccine altogether. What challenges do immunisation health workers face? Why do so many children miss out on immunisation?

In a part of India where people lead a hand-to-mouth existence, women would rather go to work and earn a day’s wage than take time off to take their child to the nearest primary health centre for immunisation. A door-to-door immunisation campaign would be more effective. It also does not help that rural women do not understand the importance of the immunisation card they are given. Cards frequently get misplaced. So it becomes hard to determine if a child has had one or two shots of a certain vaccine or none at all.

Rumour-mongering, which is easy where people are illiterate, can hamper immunisation efforts. When the first immunisation drive for children started back in 2006, a rumour that the vaccine can cause disease and was no good kept a lot of people away. Convincing parents about the benefits of immunisation is hard work. Drives rarely take place during an epidemic, they happen when calm prevails. Human memory tends to be short-lived; when the health worker presses parents to get their child immunised they say ‘Everything is okay, what is the need for immunisation?’

Sometimes, the media do not realise how hard it is to bring about change at the grassroots level in India. Once, we achieved 80% coverage in an immunisation drive--which is good. But when word got out that we were planning to go back to the area to cover those children who had missed their shots, it was reported on the lines of, ‘Immunisation drive misses out 20% children’. This is disheartening for ground workers.

How would you rate the BRD Medical College as a tertiary care centre? Is it capable of handling the sort of serious cases and the patient load that comes to it?

I was recently taken by surprise to hear the Uttar Pradesh chief minister Yogi Adityanath say that BRD Medical College is a referral centre for five crore (50 million) people. I had never realised it serves so many. Now that I think about it, the actual number of people that seek its services is probably around six crore (60 million), if you also consider the population of the three neighbouring districts of Bihar for whom this hospital is closer than the nearest tertiary care centre in their own state. The hospital is mediocre as a health facility. Speaking with relevance to this incident, I am sure it is not the only government health centre in India where a chalta hai (make do) attitude has worsened the quality of patient care it is capable of and caused a tragedy.

How long can a patient of JE or AES in respiratory distress survive without oxygen?

At the most, 15 to 20 minutes. The failure of oxygen supply played a role in causing the 63 deaths (the death toll when this interview was conducted) of children in Gorakhpur. This fact is now out in the public domain.

UP chief minister Yogi Adityanath’s spontaneous response to the Gorakhpur JE crisis was to say that “lives of young children have been snuffed out because we do not lead a clean and hygienic life”. Although the immediate cause of death of those 63 children in Gorakhpur was most likely the failure of oxygen supply, it is true that sanitation and hygiene play a big role in the spread of vector-borne diseases such as JE and dengue. Why have successive state governments not been able to improve conditions on the ground in Gorakhpur?

JE persists in Gorakhpur for the same reason that India has not been able to root out dengue from Delhi, despite the fact that it is the national capital and, therefore, one would assume, has greater resources at its disposal than eastern UP. It takes sustained efforts to effect change on the ground. Sporadic cleanliness campaigns will not work. Effort must also be made to make the messaging effective. I recollect, when we were training health workers to impart hygiene information to the rural population, at one point, we realised how futile it was to conduct the training in Hindi. The local people speak Purvi. So we got the health workers to learn their lines in Purvi. Then, we realised that people were sure to have questions, so we brainstormed and asked the health workers what people’s reservations might be and prepared responses in Purvi. We actually role-played the situation in Purvi. Using videos in the local language to spread awareness would be more effective. So would awareness campaigns targeting school-going children, college-going young adults and literate adults. Unless we each teach one (or more) people, change will elude India.

Why isn’t JE being treated or at least partially managed at the primary health centres (PHCs)?

JE is a viral disease, which means unlike a bacterial disease that requires the prescription of an antibiotic, it is treated symptomatically. A big challenge to the management of the disease at the PHC level is the general perception in rural people’s minds--and I have seen this not just in Gorakhpur--is that PHCs are no good. When a family member falls sick, they prefer to wait it out, hoping for improvement. If the condition turns serious they rush to the shehar (city). It is also a fact that JE patients can be challenging to manage. Imagine a child suffering from seizures, frothing at the mouth, with or without respiratory distress. It is safe to say that most PHC workers are insufficiently trained to manage these symptoms, especially when they occur simultaneously. Also, PHCs are not equipped with respiratory support machines.

So families end up taking their loved ones to a nearby city or referral centre, in this case the BRD Medical College. Very often, the patient’s condition worsens while being transferred because no one knows how to handle him or her. For instance, patients tend to be transferred in the supine (lying face upwards) position, which for a JE patient, can cause the accumulated froth to flow back down into the lungs, exacerbating the respiratory distress and even causing secondary infection. People may not know that they must place a soft cloth between the teeth of a JE patient suffering seizures to prevent self-harm. During my time in Gorakhpur, once, we developed pictorial pamphlets for distribution to create awareness of handling and transferring JE patients. Awareness drives must be ongoing or at least where JE is concerned, stepped up prior to the monsoon season.

What protection, if any, does the body’s immunity offer against JE? Could low immunity have played a role in the children contracting JE in the first place?

Only one in 500 people infected with JE actually presents clinical symptoms. The rest are strong enough to withstand the virus. This is true of dengue as well. Dengue is endemic to areas like Delhi and Lucknow but not to other parts of UP. During my years in Gorakhpur, I heard of instances of children of well-to-do families in UP being sent to study in Delhi in June, and falling prey to dengue in July/August. Their lack of exposure to dengue increased their susceptibility to contract the virus. Because poor hygiene and sanitation is a major problem across India, not just eastern UP, we immunologists commonly say that if a person has made it to age five (or so) in India, he or she has a significant immunity level. All the 63 victims of JE in this incident in Gorakhpur were children. I do not know their exact ages but I am pretty certain their age and overall health status was not on their side. Malnourishment lowers immunity.