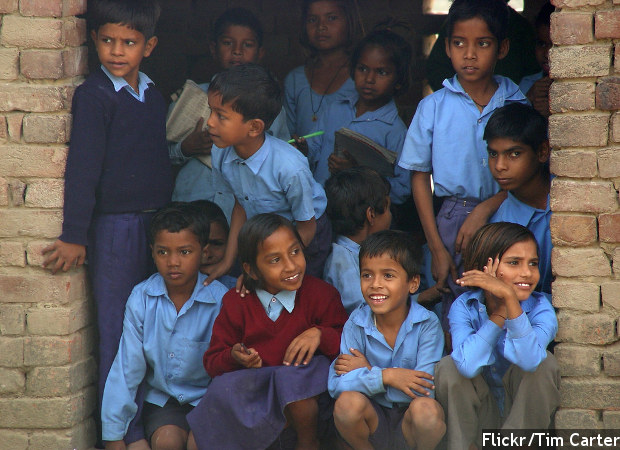 A fourth of Uttar Pradesh's (UP's) 200 million people are aged between five and 14 years--India's largest child population--but the state has the fewest teachers per student, the poorest transition rate from primary to upper primary school and amongst the lowest learning outcomes in the country.

As Uttar Pradesh, India's most populated state, goes to polls, we look at the state of education, a subject that should be on top of the agenda for any party coming to power.

As the first part of this series observed, literacy rates and learning outcomes are some of the lowest in the BIMARU (Bihar, Madhya Pradesh, Rajasthan and Uttar Pradesh) states. By 2030, India will have the world's largest working-age population--1033 million--but an IndiaSpend analysis of these four states--with 43.6% of India's school-age population between the age of five and 14--revealed that India is unprepared to educate and train its young population.

Literacy rate rose 13.45 percentage points in UP over a decade from 2001, but there are wide regional disparities: In the north-eastern district of Shrawasti, the literacy rate is 49%, while in the best performing district, Ghaziabad (in north-western UP), it is 85%, according to this report.

UP has the worst primary school pupil-teacher ratio in India

India's largest state by population has the worst pupil-teacher ratio (PTR) in India, with a teacher for every 39 students at the primary level, according to the Unified-District Information System for Education (U-DISE) Flash Statistics 2015-16. The all India average is 23:1.

UP recorded an enrolment of 25.3 million primary students (including both private and government schools) in 2015-16, taught by 665,779 teachers (even including schools where primary, upper primary and secondary co-existed), according to government education data.

About 23% of all elementary teacher posts in government schools in Uttar Pradesh are vacant, according to an answer given in the Lok Sabha (lower house of Parliament).

UP also reported the second-highest teacher absenteeism (31%) in rural public schools among 19 surveyed states in 2010, according to this 2014 study.

Similarly, state expenditure on primary education has gone up 47% between 2011 and 2015, according to the state government's Economic Survey 2014-15, but learning levels remain among the lowest in India.

Arithmetic skill levels declined in both government and private schools, with 26% of children in grade V able to divide in 2014, down from 30% in 2007, according to ASER data.

Low attendance, 624,000 children in the workforce

In UP, few attend school regularly--on average, only 55% of children enrolled were present on the days the ASER team visited primary schools in 2014, according to ASER data.

Further, many students don't make it through school. UP has the lowest transition rate from primary to upper primary level in the country, at 79.1%, according to U-DISE Flash Statistics 2015-16.

More children are at work in UP than any other state, according to this calculation by the National Commission for Protection of Child Rights, based on Census 2011 data: 624,000 children, or 8.4% of the five-14 age group.

This is the third of a five-part IndiaSpend series that looks at progress in education in the states of Bihar, Madhya Pradesh, Rajasthan, and Uttar Pradesh. You can read the first part here, the second part here, the fourth part here and the fifth part here.