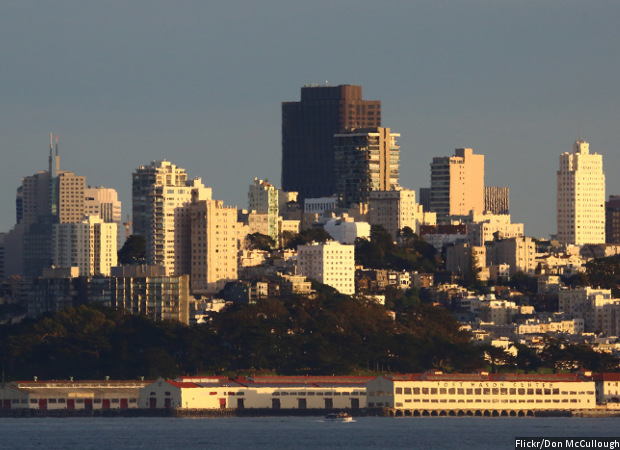 As California, the US' richest state, recently overtook France and Brazil to become the world’s sixth largest economy, according to this Bloomberg analysis, a comparison with India reveals that California has 3% of India's population but 125% of India's gross domestic product (GDP).

California, a powerhouse of innovation and technology, has 39 million people; less than Odisha which has a population of 41 million. Texas follows California with a GDP of $1.58 trillion (Rs 105 lakh crore)--79% of India’s current GDP with 2.1% of its population.

The Indian economy will more than double to $5 trillion in a "matter of few years", said Finance Minister Arun Jaitley in June 2016, as the government steps on its reforms agenda to accelerate growth.

The US projection said India will cross the $5 trillion mark in 2025.

To illustrate the size and power of the US economy, we compared India’s GDP to the GDP of individual US states, factoring in their population, to indicate the magnitude by which India lags the US in wealth and productivity. That lag also indicates the potential for India's future growth--if that potential is realised.

With a GDP of $2.5 trillion (Rs 168,000 crore), California--also the most populous state--created the most jobs of any state in the US in 2015, more than the second- and third-most-populous states, Florida and Texas, combined. Four of the world’s 10 largest companies are based in California.

Source: Bureau of Economic Analysis, US Department of Commerce

With far fewer people, US states have economies that are not just richer but more productive than those of Indian states.

Maharashtra’s GDP almost equals that of Connecticut ($0.26 trillion), ranked 23rd in the US by GDP. Maharashtra's area is 21 times larger and it has a population 31 times as large as Connecticut.

Tamil Nadu, the second richest state, has a GDP almost equal to that of Iowa, the 30th-richest state in the US. 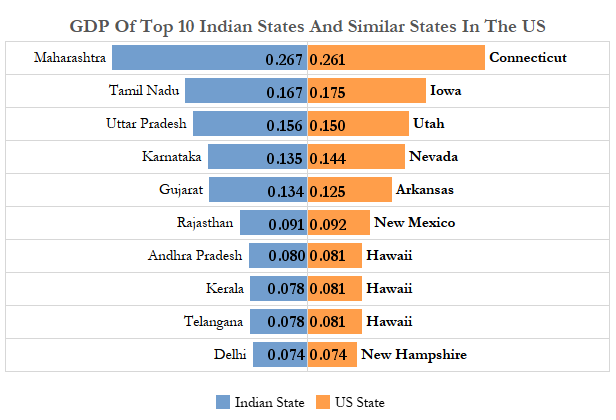 The Indian economy is a bright spot in an economically depressed global landscape, and is the world's fastest-growing economy, said this 2015 report by the International Monetary Fund (IMF).

The Indian government’s efforts to improve business climate have gained momentum, the IMF report said, emphasising reforms in key areas. These include:

2. To convert GDPs of Indian states into US dollars, we have considered an exchange rate of $1 = Rs 67

3. Actual figures of GDPs may vary due to currency fluctuations or change in base years, but the trends largely remain the same.

Update: The story was updated to improve clarity in the first paragraph.