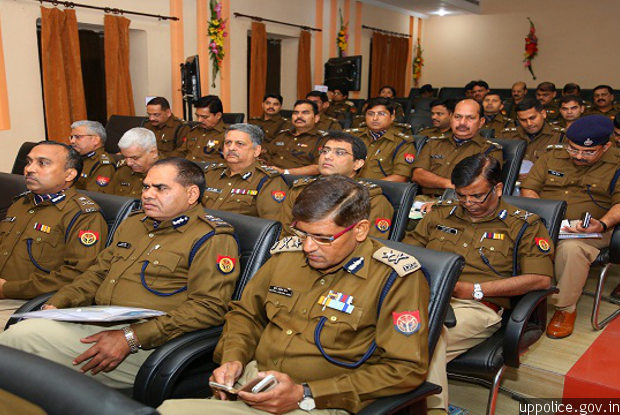 Senior police officers of Uttar Pradesh during the Police Week in December 2016. Between 2007 and 2015, IPS officers in UP--who account for 11% of India’s IPS cadre--were transferred 2,251 times, accounting for 43% of the 5,169 transfers of IPS officers who are district police chiefs nationwide.

Lucknow/Bengaluru: Over 10 years (2006-15), Uttar Pradesh (UP) transferred Indian Police Service (IPS) officers at four times the Indian average, according to an IndiaSpend analysis of Bureau of Police Research and Development (BPRD) data.

Although the rate of transfers declined 37% over this period, the average IPS officer stayed at her post for less than a year over this period. Regardless, the crime rate doubled:

No state came close to UP’s transfer regime for these officers. With 453 transfers, almost one-fifth of UP, Tamil Nadu was second on the list of states transferring such officers.

In January 2016, the government of Samajwadi Party (SP) Chief Minister Akhilesh Yadav transferred 80 senior IPS officers, including an inspector general IG. The next month, 50 IPS officers posted in more than 12 districts were transferred, some of them among the 80 transferred in January.

SP government keeps IPS officers on the move, but other parties have done the same

The SP government transferred about 100 IPS officers as soon as it took office in March 2012, but such transfers are now regarded as administrative hazards in UP, with other parties doing much the same when in power.

Between 2007 and 2011, when the Bahujan Samaj Party was in power, there were an average of 134 transfers within a year of posting; about 200 transfers between one and two years of posting; and 261 each year, on average, during the full five-year term, according to BPRD data.

By comparison, during the SP’s term in power, between 2012-15, there were an average of 139 transfers within a year of posting; 23 between one and two years of posting; and about 163 transfers each year, on average, over four years (data are not available for 2016).

“Political pressure, especially from parties that hold power, is the major reason for frequent transfers of IPS officers,” said former Uttar Pradesh Director General of Police Vikram Singh. “Senior police officials receiving calls (for transfers) from leaders and politicians in power are common. Officers are transferred so quickly that it gives a free hand to notorious criminal elements of the state. It has hit policing hard.”

With 200 million people, UP is India’s most populous state and does have more IPS officers than any other Indian state, but the rate of transfers, as we said, is four times the national average. As of January 1, 2016, there were 404 IPS officers in UP, 21% fewer than the 517 it should have. Logically, this shortage of officers should mean longer postings and greater responsibility. But UP’s IPS officers have the opposite experience.

Transferred 24 times in 24 years: An IPS officer’s story in UP

Since he finished training in 1992, Amitabh Thakur has been transferred 24 times in 24 years, he told IndiaSpend.

Thakur also alleged he has faced threats, intimidation and suspension in the course of his career.

"I joined the IPS because I wanted to transform society,” said Thakur. “I don't know how far I have succeeded. I tell my subordinates to be upright. But so many transfers make working difficult. It hampers our performance and affects our normal life," Thakur had said in an interview he gave to India Today magazine in 2013.

Recognising this impact on morale and performance, the Supreme Court of India, in October 2013, directed the Centre and the states to set up a Civil Services Board to manage transfers, postings, inquiries, process of promotion, reward, punishment and disciplinary matters.

Within three months of that verdict, the government amended the rules governing Indian Administrative Service, IPS, and Indian Forest Service officers to assure them of a tenure of at least two years at a post.

Every state must make appointments of cadre officers on the recommendation of a Civil Services Board chaired by the state’s chief secretary, according to the new Indian Police Service (Cadre) Amendment Rules, 2014. A transfer before the end of the two-year term required a board recommendation.

Little of this has happened because states--led by UP--ignored these directions.

The Civil Services Board exists, but it isn’t effective

“The 2014 amendments are not being adhered to and there are a large numbers (sic) of deviation from it. Transfers are made at very short intervals,” Thakur, currently inspector general of police (rules and manuals), told IndiaSpend. “The methodology and procedure prescribed in the rules, which are elaborate and self-explaining, are not being adhered to.”

The Civil Services Board, alleged Thakur, is being cowed down by politicians. “The independence that is supposed to be shown by them while making recommendations is not visible,” he said.

Rahul Bhatnagar, Chief Secretary of Uttar Pradesh and chair of the Civil Services Board, denied such pressure.

“There are various issues that the Civil Services Board has to consider,” said Bhatnagar. “It is not (always) a question of political pressure. We can’t just give a blanket tenure to everybody. If somebody is not performing or not having a good relationship with his peers or subordinates, then we may have to decide that one (sic) is not performing and he has to be changed.”

(Mallikarjunan & Singhal are members of 101Reporters.com, a pan-India network of grassroots reporters.)