UP’s Health Variations: From Worse Than Haiti To Better Than India 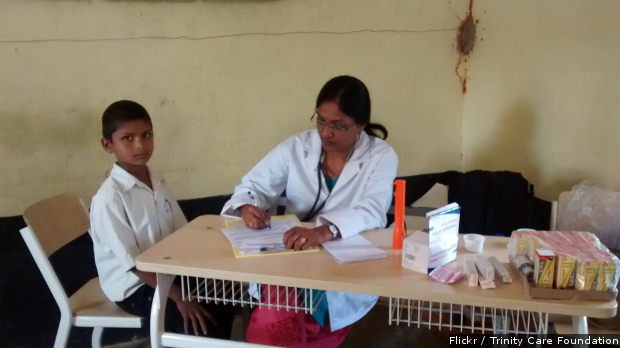 At a time when India’s sex ratio at birth is low and declining--from 909 (2011) to 887 (2014)--there are, in poor, populous Uttar Pradesh (UP), districts such as Aligarh, Moradabad, Mainpuri, Deoria and Balrampur, with sex ratios at birth exceeding 1000--in other words, better than any state in India.

So, too, with the infant mortality rate (IMR) and maternal mortality ratio (MMR). Kanpur Nagar district in western UP had an IMR of 37 in 2012-13, which was better than the Indian average (42). UP’s maternal mortality ratio (MMR) is 258, but Meerut mandal in western UP (including urban NOIDA and Ghaziabad) had an MMR of 151, better than the Indian average, although Devi Patan mandal, 600 km to the south-east had an MMR of 366, worse than Ethiopia and Haiti.

While UP may appear to be a monolith of Hindi-speaking, overwhelmingly poor people with some of India's worst health parameters, as the second part of this series told us, a district-level analysis by Observer Research Foundation, using data from the Annual Health Survey (AHS 2012-13)--the latest available--reveals that India's most-populous state has almost continental style variations in its healthcare system and indicators. The latest data from the National Family Health Survey (NFHS-2015-16) for UP will be released only after the elections, scheduled for February 11 onwards.

AHS gives major health indicators at the district level. The wealth of data collected by AHS remains an underutilised resource. The assembly elections may prove to be a good occasion to use it to promote policies that enhance well being in the state. As the Economic Survey 2015-16 observed, investing in health and nutrition are two sure-shot ways of enhancing the productive potential of a state.

Sex ratio at birth: Some districts have more women than men

Immunisation remains low in UP, leaving many children at risk of preventable morbidity or death. In 2012-13, UP had fully immunised no more than 52.7% of its children, with 7.6% with no immunisation. The all-India average is 65.3% for full immunisation and 6.6% for no immunisation, for the year 2013-14.

Children In Uttar Pradesh Who Did Not Receive Any Vaccination

Children Who Received Polio Dose At Birth, By District

In Shrawasti, Balrampur and Sonbhadra districts, more than half the children do not receive a polio dose at birth. While India celebrates six years of being polio-free, outbreaks are still a risk.

The IMR–or the probability of children below one year of age dying, expressed as deaths per 1,000 live births--provides indications about poverty and other socio-economic characteristics of a community, according to this 2012-13 AHS report.

A district-level analysis throws up wide disparities: the IMR in the north-eastern Shrawasti district is 96, almost three times the IMR of Kanpur Nagar (37) in western UP.

As our maps show, a new government will need to address the inter-district disparities revealed in our analysis, particularly regions with high proportions of preventable infant deaths.

Stunting among children under five years is highest in UP (62%), as is severe stunting (35.6%), according to the 2014 Clinical, Anthropometric and Biochemical (CAB) survey. None of 70 UP districts surveyed for the AHS figured among 10 best-performing amongst 284 districts across nine states.

However, of the 10 worst-performing districts with stunted children, five were from UP. The worst stunting among 284 AHS districts were found in Rae Bareli in southern UP and the worst underweight outcomes in the western district of Hamirpur.

In a sea of undernutrition, overnutrition in some districts

There is a high proportion of overnutrition of children under five in some districts--mostly in western UP--such as Pilibhit (24.6%), Bulandshahr (21.8%), Budaun (21.7%), Auraiya (21.4%) and Aligarh (21.1%). In other words, UP has a dual burden of undernutrition and overnutrition, which will affect its morbidity rates and impact its economic growth.

A comprehensive policy overhaul may be necessary for UP to improve its performance in health and nutrition. The coming state elections provide political parties an opportunity to share with voters their vision for the future of UP’s human development.

There are efforts to improve the situation. UP is one of the six Indian states with a nutrition mission. It was created in 2013, with the objective of working closely with nodal departments, such as health and women and child development which runs the Integrated Child Development Services (ICDS), the world’s largest child-nutrition scheme, and other contributing departments to reduce undernutrition among children below three years. Its impact on the nutritional status of UP’s children remains unevaluated.