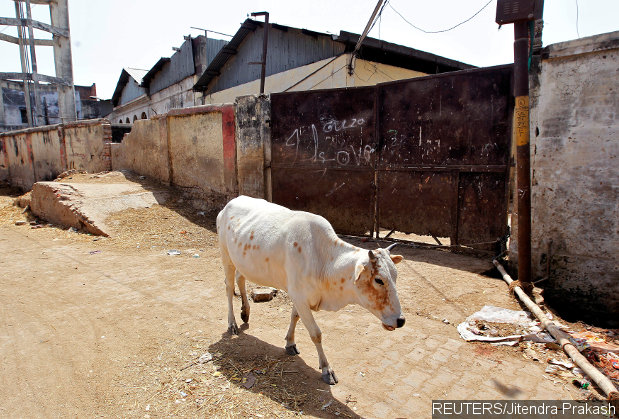 A cow walks past a closed slaughterhouse in Allahabad, India

The closure of Uttar Pradesh's slaughterhouses could leave a couple of million people jobless in the state, affect its allied industries and choke small but important revenue streams for its poor farmers, especially in drought-prone areas, according to an IndiaSpend analysis of available data on India’s meat, leather and livestock industries.

Half of Uttar Pradesh’s licensed slaughterhouses and scores of illegal ones have been closed after an order from new chief minister Yogi Adityanath against those that do not follow the law.

The drive against slaughterhouses could impact three critical industries in UP: Meat packaging, livestock and leather. With some of India’s worst development indicators, stagnant agriculture and industry, as IndiaSpend reported in March 2017, India’s most populous state is also one of its poorest with the second-highest unemployment rate--after Jharkhand--among India’s eighth most socioeconomically backward states.

Meat-packing and leather industries make up the major share of India’s export earnings, with UP contributing significantly. UP accounted for nearly 43% of buffalo-meat exports in 2015-16, the highest among all Indian states, according to data published by the Agriculture and Processed Food Export Development Authority (APEDA). Leather ranks eighth among India’s top export earners, with about 46% of what is produced being exported, according to the Council for Leather Exports (CLE). A third of these exports go from Kanpur in UP, a city where the leather industry, as IndiaSpend reported in February 2017, is already in crisis.

The Bharatiya Janata Party’s (BJP’s) election manifesto for the UP assembly election had promised to shut all illegal slaughterhouses in the state. But “over-enthusiastic” officials--who appeared to be acting indiscriminately, shutting down even abattoirs with licenses--are now being reined in by the government, according to some media reports.

IndiaSpend research shows that the slaughterhouse ecology is complex and supports diverse, rural and urban economic and social systems not just in UP but nationwide. Here is a look at the three industries that will be most affected by the campaign.

1. Meat: UP accounts for 43% of India’s buffalo-meat exports

Illegal slaughterhouses being targeted by the UP government dominate the meat market in India: 4,000 are registered and more than 25,000 are not, among units that cater to the domestic market, according to this APEDA report. Even in the export market, registered and unregistered slaughterhouses both produce meat, APEDA acknowledges in this report.

UP is the largest producer of meat in India, according to the Agriculture Statistics Report, 2015. In 2014-15, it contributed 21% of the meat produced in India. Of the 75 slaughterhouses registered with the APEDA for meat export, as many as 49 are in UP. This means the state is likely to have the large number of slaughterhouses, many illegal. 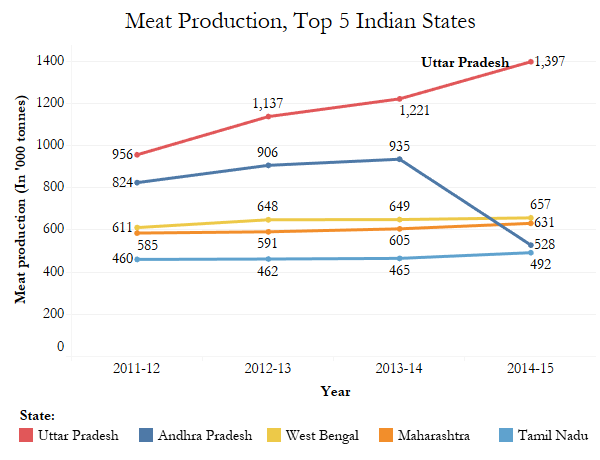 Source: Agricultural Statistics At A Glance 2015

The issue of illegal abattoirs in UP is not new. The erstwhile Samajwadi Party government had also issued a government order in June 2014 to probe their operations. In May 2015, the National Green Tribunal ordered the state government to act against illegal slaughterhouses to curb the pollution caused by them. The BJP government’s move goes a step further, banning not only illegal slaughtering but also licensed mechanical operations, which are mostly legal and focussed on exports.

Previous governments, acknowledging the advantage of mechanised slaughter technology over traditional methods in increasing and improving output for the export market, had offered financial

Source: Agricultural Statistics at a glance 2015 (in million)

As the table above shows, India houses a significant percentage of the world’s livestock. A comparison of the last two livestock censuses reveals a 3.33% decrease in livestock in 2012 compared to 2007. But UP, along with Gujarat and Assam, registered growth (14%), indicating the economy’s dependence on livestock and allied businesses.

Livestock are an important economic resource, especially in rural areas. Cattle, buffalo, goat and sheep are maintained by agricultural families, mostly those with small land holdings, and by landless labourers who use them primarily for milk and also meat. Cattle are also loaned for agriculture and transportation. Poor families sell stray cattle to butchers. In drought-affected areas, such as parts of Maharashtra, Karnataka, Madhya Pradesh and UP, cattle are often sold to tide over economic crises.

The Indian leather industry provides formal and informal employment to 2.5 million people, mostly from disadvantaged communities: A third of leather workers are women and a fourth are scheduled castes and tribes, according to this 2009 study by the Labour Bureau of India. Leather workers who are not from traditional tanning communities or are not Muslims come from poor agricultural families, according to a study by the Centre for Education and Communication (CEC), an advocacy.

(Singh is an Associate Fellow at the Rajiv Gandhi Institute for Contemporary Studies in New Delhi.)