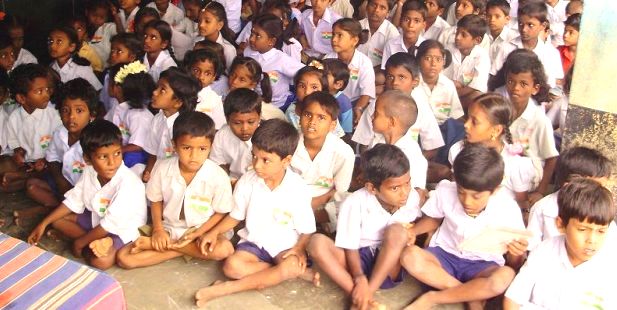 Absolute numbers are good because they show where you stand when compared to a point in time earlier. But then, targets cannot always be absolute.

Absolute numbers may look good in education but if you compare what India has achieved, in areas like higher education enrolment or literacy, to other developing countries, it’s a long way to go. And that is not quite highlighted in the high decibel, state-sponsored pre-election advertising campaigns.

In the run up to the general elections later this year, IndiaSpend is attempting to examine the achievements of the Congress-led United Progressive Alliance (UPA) Government, which has been in power at the Centre for 10 years.

In an earlier report, we took stock of the stated achievements of the Government in the health sector. Now we put the spotlight on education indicators and achievements, as claimed by the Government, and try and place it in the global context.

Now, let us put this in the global context. Even though we are doing better than some of our neighbouring countries, we have the lowest literacy rates among BRICS nations.

Enrolment is another area that the UPA Government says there have been significant leaps. The Net Enrollment Ratio (NER) in primary education, according to the claim, has increased from 92.7% in 2006-07 to 98.3% in 2009-10.

Data from District Information System for Education (DISE), a Ministry of Education initiative to collate data on education across the country, corroborates the numbers. The NER for primary level has grown by five and a half percent between 2006-07 and 2009-10. In 2012-13, NER at primary level was 90.78.

Experts say that the encouraging figures in enrolment in primary education are due to the successful running of schemes including The Right to Education (RTE) Act and the Mid-day Meal (MDM) scheme.

To see these numbers in the global perspective, we have chosen a mix of developed and developing countries to see where India stands in terms of NER at primary level education.

Enrolment in higher education has also gone up, according to the UPA Government. Data shows that Gross Enrollment Ratio (GER) at the higher education level has grown from 12.3% in 2006-07 to 18% in 2011-12.

Although the enrolments for higher education have increased 5.7% between 2006 and 2011, women’s enrolment has not been growing fast enough.

India is lagging behind other countries in terms of enrolments at the higher / tertiary level. We are far behind the global GER for tertiary level, which is 30%, and even farther from developed countries like UK (61%) and USA (95%).

The period of governance under the UPA Government did see considerable changes in education but India is still lagging behind many of the countries we are competing with and will compete over the next decade.

What this is telling us is that while efforts have been made by the UPA Government, a lot more still needs to be done.Experts also believe that improving the quality of education being imparted should be of primary concern as we are already nearing universal enrolments at the primary level.