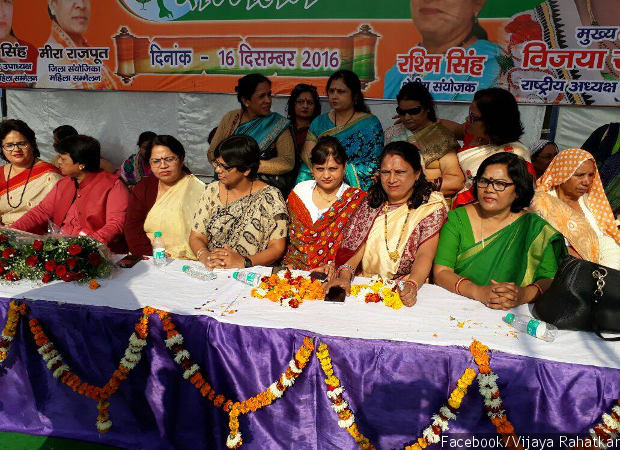 Office-bearers of the Bharatiya Janata Party's Mahila Morcha--the party's women's wing--participate in a Mahila Sammelan in Aligarh, Uttar Pradesh. In the state, as voter turnout has risen, more competitors have stood against women candidates, fewer women have won and a growing number have lost their deposits.

Poor, populous Uttar Pradesh (UP) was the first Indian state to have a female chief minister--Sucheta Kriplani from 1963 to 1967--but this pioneering effort has not improved prospects for women in elections.

As voter turnout has risen, more competitors have stood against women candidates, fewer women have won and a growing number have lost their deposits, according to an IndiaSpend and Swaniti Initiative analysis of electoral data of the last three state elections in UP since 2002.

The only exception was for the seats reserved for scheduled caste (SC) candidates. The proportion of women winning SC seats was more than double that of those winning general seats.

All this happened over a period when women in India’s most populous state became healthier and better educated, reinforcing the point that there is no correlation between these indicators and better political representation of women.

States with the worst sex ratios have more women members of legislative assemblies (MLAs), as IndiaSpend reported in September 2015.

Women also became less anaemic and had fewer chances of dying during childbirth. UP’s maternal mortality ratio (MMR)--an indicator of general health progress--declined from 440 deaths per 100,000 live births in 2004-06 to 285 in 2011-13.

In general, there appears to be a surge in women contestants in elections, as IndiaSpend reported in May 2016, but we found that a growing number in UP are forfeiting deposits, which means they could not garner a sixth of valid votes polled in their constituencies.

This is used as an excuse by political parties to field fewer women candidates, which further reduces their political opportunities.

How does this work?

We sought to explore if a higher voter turnout jeopardises the chances of women candidates in seats of both categories.

This is what we found.

As the graph below indicates, the proportion of female candidates who saved their deposits--in other words, won enough votes to be taken seriously--was higher when they contested from seats reserved for SCs.

A couple of caveats:

Source: Election Commission of India data for 2002, 2007 and 2012; *Average number of candidates in constituencies with a female victor

The Women’s Reservation Bill [The Constitution (108th Amendment) Bill, 2008], which was passed by the Rajya Sabha, lapsed in 2014 with the dissolution of the 15th Lok Sabha. The Bill called for the reservation of a third of seats for women in the parliament and the state legislative assemblies, but it has met with widespread resistance from male politicians.

Since 2001, at least 14 political parties with a women-oriented political agenda have emerged across India, according to a six-state March 2015 IndiaSpend analysis of an official list of political parties between April 2001 and January 2015.

Five of these parties had contested either a general election or a state assembly election in the past 15 years, according to statistical reports of elections to the Lok Sabha and state assemblies.

Despite a low success rate (with 100% deposit forfeited in all cases), most of these parties have survived, and the trend of registration of women’s issues-based parties has increased over the years, in a country where women comprise no more than 11.4% of the parliament.

(Sharma is an associate fellow at Swaniti Initiative, a nonprofit working in the development space, based in New Delhi.)