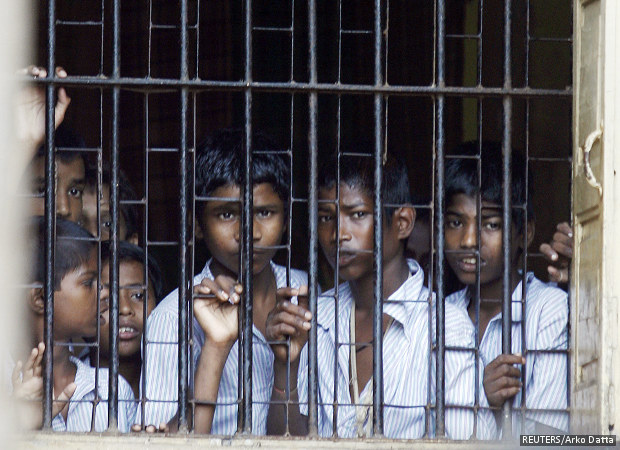 The new Juvenile Justice Act 2015 came into force last month, paving the way for juveniles aged 16 to 18 to be tried under adult laws for heinous crimes.

A major challenge now will be to establish the age of juveniles, which will not be easy because no more than 56.2% of India’s births were registered in 2000, according to the Civil Registration System.

This means the ages of teenagers born in 2000 could be uncertain. For instance, juveniles presumed to be aged 16 or older, based on school certificates, might actually be 15. Economically disadvantaged children, currently aged between 15 and 18 based on official records or school certificates, are at maximum risk.

As many as 78% of Indian juveniles are from families with annual incomes less than Rs 50,000 per annum, and 53% of juveniles are either illiterate or educated till primary school, IndiaSpend had reported earlier.

No birth certificates, ages of teens accused of crime dubious and uncertain

Age has been a point of contention in juveniles accused of crimes. The 16 December 2012 gang-rape, known as the Nirbhaya case, is an example.

Since his birth certificate wasn’t available, the age of the juvenile accused in the rape was taken to be 17 years, 6 months and 12 days by the Juvenile Justice Board, which relied on a certificate provided by a government school in his hometown Badaun, where he studied.

The school’s principal, who had deposed before the Board, had entered June 4, 1995 as the teen’s date of birth, the Times of India reported.

“On the day he joined, we asked the boy's father when the child was born, and we were told it was either six or seven years ago,” the principal was quoted as saying.

The teen’s mother wasn’t sure of his age either.

“I do not know his birth date,” she said. “I have no idea regarding either the day or date of admission. I just went to the school and told the teacher that this is my child, he is five years of age, write down his name.”

The assessment of his age has legal precedents. In “Ashwani Kumar v/s State of Madhya Pradesh 2011”, the Supreme Court (SC) said that the admission register in the school is a relevant piece of evidence of a child’s age, and should be given precedence over medical tests.

Ashwani Kumar (the appellant), who had committed a murder, was 17 years, 11 months and 25 days on the day of the incident: 19 October 2008. He had produced his high school mark sheets, which listed his date of birth as 24 October 1990, but the lower courts challenged the authenticity of the certificates and ordered independent medical tests by two different doctors.

The tests concluded that despite a possible margin of error, Kumar was definitely more than 18 years of age and should be tried under adult law. But the SC overturned the decision and declared him a juvenile on the basis of school mark-sheets.

In another case, “Shah Nawaz vs State of Uttar Pradesh and Another 2011”, the Supreme Court reiterated that medical opinion from a medical board should be sought only when a matriculation (or equivalent) certificate or a date-of-birth certificate from the school first attended or a birth certificate issued is not available.

The link between birth registration and juvenile justice

“The child shall be registered immediately after birth and shall have the right from birth to a name, the right to acquire a nationality and as far as possible, the right to know and be cared for by his or her parents,” states Article 7 of the 1989 U.N. Convention on the Rights of the Child (CRC).

In 2015, the Delhi High Court (HC) ordered that the birth-registration system be linked to the juvenile-justice administration so there would be access to birth certificates, allowing age determination of juvenile crime suspects, preventing misuse by lawyers, criminal gangs and police.

In 2011, many children wrongfully lodged in Tihar Jail were released after the Delhi HC took suo moto cognisance of the situation.

The cases we mentioned stress the need for authentic birth certificates.

In 2001, in response to India’s poor birth registration rate of 58%, UNICEF India, in an article, said: “Unregistered children are generally the children of the poor and the excluded. An unregistered child will be a more attractive target for a child trafficker and does not have even the minimal protection that a birth certificate provides against early marriage, child labour, or detention and persecution as an adult.”

Bone-ossification test can only estimate, not give the exact age

The most common medical method for age determination is the bone-ossification test. It involves X-rays of all major limb bones, including pelvic, shoulder, elbow, knee, ankle, thigh and wrist.

“It is a good method, with a fair deal of accuracy in estimating age, though there are limitations. We can only give the age within a range of two to three years. Giving the exact age is not possible," Dr Harsh Mahajan, president of the Indian Radiology Association, told the Indian Express.

However, like most such data, these findings rely on statistical correlations between bone development and age, and it’s quite possible that some children may develop faster or slower than the tests and charts expect them to, argues this Mint editorial.

Permission for the bone-ossification test is also tough to get. For instance, in the Nirbhaya case, the Juvenile Justice Board had denied repeated police requests for the test, since the juvenile’s school mark-sheet mentioned his age.

In 2000, birth registration of heavily populated states much below national average

In 2000, the five states with the lowest rates of birth registration were Bihar, Jharkhand, Rajasthan, Assam and Madhya Pradesh, respectively, and in 2014, MP, Bihar and Rajasthan were among the top five states registering juvenile-crime cases.

The birth registration rate has increased from 56.2% in 2000 to 85.6% in 2013, but for those whose births escaped official registries, involvement in crime is likely to be a fraught exercise.