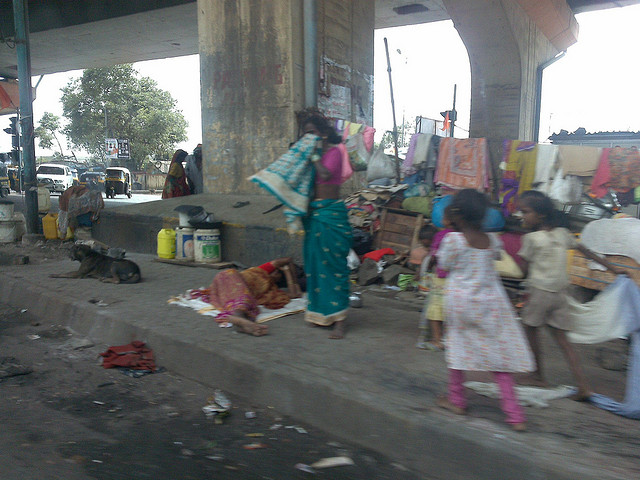 Prime Minister Narendra Modi has announced that houses for the homeless by 2022 should be a national mission. IndiaSpend, in anearlier report, had estimated the government needs to build about 60,000 houses each year until 2022 to achieve for its mission of housing for all.

But until that begins, there is another major problem that needs attention, particularly in major cities: shelter for pavement dwellers or homeless people.

The homeless are an invisible mass of people, facilities for whom are rarely monitored. In Maharashtra, India’s richest state, 95.8% of shelters that were supposed to be built were simply not, a violation of Supreme Court orders.

In 2010, the court said all states must provide one homeless shelter for every 1,00,000 people in 62 major cities of India. Here is a paragraph from the judgement:

“Article 21 of the Constitution states that no person should be deprived of his life or personal liberty except according to the procedure established by the law. Over the years, this Court’s jurisprudence has added significant meaning and depth to the right to life. A large number of judgments interpreting Article 21 of the Constitution have laid down right to shelter is included in right to life.”

The shelter manual is a comprehensive guideline for setting up night shelters. For instance, this is what it said about “essential facilities”:

Subsidised meals: Community canteens must be set up within the shelter premises or adjoining it, to facilitate access of shelter residents to subsidised food.·

Bedding: Adequate bedding must be provided to residents (including blankets where required). Linen must be changed on a daily basis.·

Lockers: Shelters must be equipped with locker facilities, thus allowing residents to store their belongings safely·

Let us now look at the homeless households and population in a major metro like Mumbai:

Abhishek Bharadwaj, an activist with Alternative Realities, a Mumbai-based non government organisation (NGO) working with pavement dwellers in collaboration with ActionAid, an anti-poverty agency working with poor people to end poverty, said the state government has not obeyed the Supreme Court. The plight of thepavement dwellers, he said, remains the same: They continue to live on the streets, vulnerable and without security.

We looked at some documents from the Supreme Court, relating to state government efforts to help the urban homeless.

The data show that 284 night shelters are required in Maharashtra. Till 2012, only 12 permanent and 12 temporary shelters were built across the entire state. That means 95.8% of shelters in India’s richest state were simply not built. In Greater Mumbai alone, this leaves an estimated 57,000 people in urgent need of shelter. Activists believe that apart from being callous, this situation is a violation of the guidelines issued by the highest court of the land.