Under Strict Lockdown, Indore Is Deploying Its Swachh Bharat Machinery To Deliver Groceries

Jaipur and Indore: At 6.30 a.m., Pooja Baberiya, 26, wrapped a multi-coloured scarf over her cloth mask, leaving only her eyes exposed, which she covered with sunglasses. She put on gloves and a white coat with the familiar Swachh Bharat logo and slung an identity card given by the Indore Municipal Corporation (IMC) around her neck. She was ready to go out with IMC’s trash collection van, but her task was taking orders for groceries from households along the van’s route.

Several cities, including Surat and Ahmedabad, are delivering groceries to homes but Indore (along with Bhopal) is one of the few giving a new spin to its award-winning urban waste management system.

The city has been under a strict curfew since March 29, 2020, with residents not allowed out even to buy food. The IMC has been doing home deliveries of essentials since the first week of April 2020. Every day, a team comprising a driver, a helper and a volunteer from an NGO, like Baberiya, set out to collect garbage and also hand out and collect grocery order forms. “It is scary as everyone else in my family stays in the house and only I go out for work,” said Baberiya, a single mother.

Around 300,000 orders have been collected so far, ranging from 5,000 to 20,000 per day. The order forms eventually reach the specified grocery stores to be delivered to homes. To be chosen, a grocery store must have delivery staff as well as a vehicle for delivery. For shops that do not have vehicles, the IMC has arranged private vehicles, such as auto-rickshaws that are lying unused. Shops that fail to deliver orders in time lose their licence to work during the lockdown and have their curfew passes revoked.

The economic hub of Madhya Pradesh, Indore has been under flak for its handling of the pandemic as its COVID-19 positive cases grew from four on March 24 to 915 as of April 22, 2020, according to the head of the COVID-19 testing lab in Indore and data from HealthCheck’s Coronavirus Monitor.

The crisis has forced city authorities to think creatively and the idea was born to use the vans, familiar to residents for their cheerful jingle, which are part of the waste management system that propelled Indore to the number one position out of 471 towns on the government’s Swachhata Sarvekshan (cleanliness survey) rankings for three years in a row. 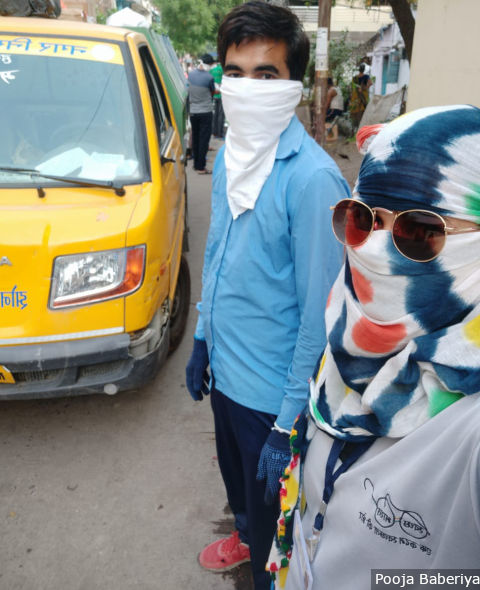 In pre-lockdown days, Baberiya used to be responsible for ensuring that the garbage vans were clean, the pick-up was regular and that residents were satisfied with the service. Now, as she rides along with the garbage van, she picks up the order forms from homes and deposits them at the IMC’s zonal offices.

Initially, these orders were delivered by grocery stores at a central location where residents would come and pick their order up, said Asad Warsi, a consultant who works with the IMC on solid waste management. “This created a crowd and it was difficult to maintain social distancing so the system was discontinued in a couple of days,” Warsi said.

The IMC switched to a home-delivery model. It selected grocery shops that could serve the demarcated areas of a ward. Unless urgent, one household is allowed to order only once a week as the deliveries are done in bulk. 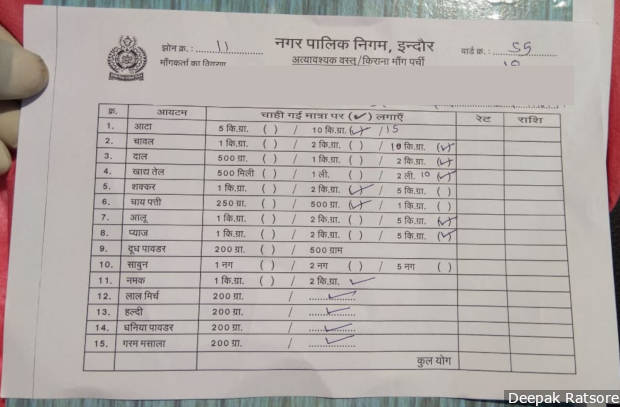 A filled order form for groceries. The Indore Municipal Corporation has collected about 300,000 such forms since March 29.

Initially, when fewer grocery stores were linked to the service and when the lockdown had resulted in a high volume of deliveries, the system was unable to cope. Warsi said deliveries could take 4-5 days. “We placed an order around April 4 or 5 but we never received anything,” said Shantanu Jain, a doctor, who lives in the Saket area.

Now that more grocery stores have been added, deliveries are done within a day of getting the order, said Rajneesh Kasera, Indore’s additional municipal commissioner who is in charge of the Swachh Bharat Mission and city sanitisation.

Currently, residents can order potatoes, onions, cereals, pulses, oil, ghee, sugar, salt and spices. The IMC hopes to expand the list to include vegetables and fruits.

When Urvashi Vagtharia, 25, who was visiting her parents from Mumbai when the lockdown began, placed an order, it arrived the same day and she was happy with the price and quality. “The advantage is safety. You can’t really get out and all of the IMC people take precautions and have masks and gloves,” she said.

The early days saw a few embarrassing moments. Some people thought the groceries being delivered were free. When they realised they had to pay, their faces fell and some refused to take the groceries, Warsi said, adding, “We still get a couple of such incidents.”

The number of grocery stores linked with the service has risen from 200 to 1,000, and the early hiccups, such as late deliveries, have been resolved.

“Now people are sure that if they need something it will be delivered,” and they don't panic about essentials, said Arpit Joshi, a stringer with a newspaper, whose order was delivered the day after giving the form.

When Baberiya started taking food orders on April 4, 2020, she used to get 90 orders a day. Now, that number has fallen, both because people are well stocked, and because many of the poorer slum residents on her route have run out of money. “In the past few days, I have been getting only 8-10 orders a day,” she said.

Other areas are also ordering less, the trash van drivers and IMC volunteers told us. Many residents are too poor to place a minimum order of Rs 500 and some find the grocery costs higher than what they pay locally.

“They are selling 5 kg of flour for Rs 200 when we get it for Rs 150 at a local shop, sugar for Rs 60 per kg when we can get it for Rs 40,” said Vandna Sheshrav Wagh, who works as a household cook. “None of us from the colony ordered from them. We prefer getting it from the local kirana shop owners.”

The poor and out-of-work often ask Baberiya about free rations. “I give them the government helpline through which they get the groceries delivered for free,” she said. “The helpline number is busy most of the time, so I ask the residents to be patient and keep calling the line until they get through to someone.”

The trash van drivers try to remain as far as possible from residents and not allow anyone without a mask to get near. “People understand our safety is also their safety,” said Deepak Ratsore, 38, a van driver in the Murai Muhalla area.

The drivers have been provided safety equipment by the IMC. “Some of us were given masks, gloves and sanitisers but not all of us,” said one of the trash van drivers, who did not want to be identified for fear of losing his job.

Kasera disagreed, saying cloth masks and thick reusable gloves were given to all drivers and helpers. “They were given after biometric verification so there is no chance that someone has not received them,” he said.

Meanwhile, Baberiya, like other volunteers, van drivers and helpers, takes stringent precautions. As soon as she reaches home after her shift, she goes to the bathroom, washes her clothes with soap, including the mask, gloves and sunglasses, takes a shower, puts on fresh clothes, and only then does she sit down to hug her waiting daughter.