Under Modi, Record Rise In Unspent Funds For Dalits/Tribals 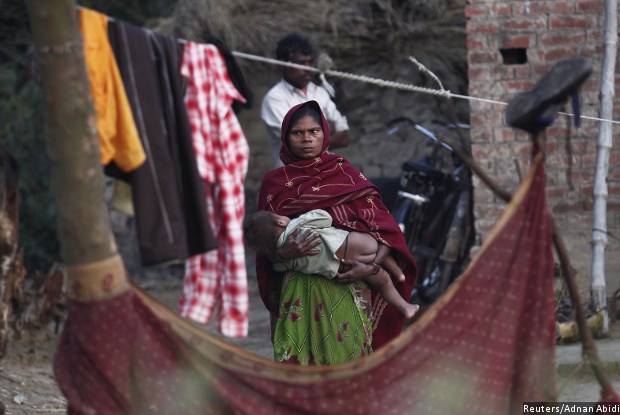 A woman holds her child as she stands outside her house at the Dalit village of Bhaddi Kheda in Lucknow district, Uttar Pradesh. More than one-third of the funds allocated by central ministries to the two funds meant for Dalits and the adivasis--the Scheduled Caste Sub Plan (SCSP) and the Tribal Sub Plan (TSP)--remained unspent in 2014-15. Corruption drains away the little that does trickle down to the Dalits and adivasis, our investigation found.

In the run-up to the 2014 general elections, then the Bharatiya Janata Party's prime ministerial candidate Narendra Modi, while addressing a gathering of Dalits and backward classes in Kerala, had described himself as a victim of untouchability. “The next 10 years are going to be yours,” he had said. And the crowd broke into loud cheers.

The National Democratic Alliance (NDA) government ostensibly kept his promise--the 2014-15 budget witnessed a 25% increase in allocation of the two funds meant for Dalits and the adivasis--the Scheduled Caste Sub Plan (SCSP) and the Tribal Sub Plan (TSP) funds. However, more than one-third of the funds allocated by central ministries--Rs 32,979 crore--remained unspent in 2014-15.

This is an increase of 250% in the money unused compared to the previous year. Modi’s first year in office as the prime minister saw the ‘highest’ amount unspent and also the highest percentage of amount unspent in the last three years (the only period for which central government has figures).

In the second part of this series on how successive governments have under-utilised these special funds, IndiaSpend tried to trace some stories of neglect. Between 1997 and 2002, for instance, Bihar allocated thousands of crores of rupees for Dalit welfare schemes. A decade and a half later, when IndiaSpend sought to know, through a right to information (RTI) request, how much of this was spent on Dalits, the answer was: “Full report is being collected.”

Ever since they were first launched 35 years ago, the two funds have been left mostly untouched by successive governments. In the first part of this series, IndiaSpend reported that Rs 2.8 lakh crore ($42.6 billion) set aside to improve the lives of scheduled castes and tribes have been lying unused while their intended beneficiaries continue to suffer severe deprivation.

“The government gets away with allocating funds to pacify the people but not actually spending it. This is at the cost of extremely poor people who direly need these funds,” said Paul Divakar, convener of the National Coalition for SCSP-TSP Legislation, an umbrella organisation that monitors the special plans.

There are two big reasons for this neglect: First, there is no legislation to back the plans. Secondly, the committees set up by state governments at several levels to ensure the optimal use of the funds are proving to be ineffective. These panels were meant to identify issues at the local level, select suitable schemes to address them, and form a feedback mechanism to fix glitches.

What happens to the money: A Telangana story

Our inquiry into the nature of the problem took us to a school in Telangana built with tribal funds. We found corruption draining the money that should reach the poor.

The walls of the government residential school in Gudur village in Nalgonda district have started cracking even though the structure is just three years old. “Commission, commission,” was how the principal of the school explained the state of the building. 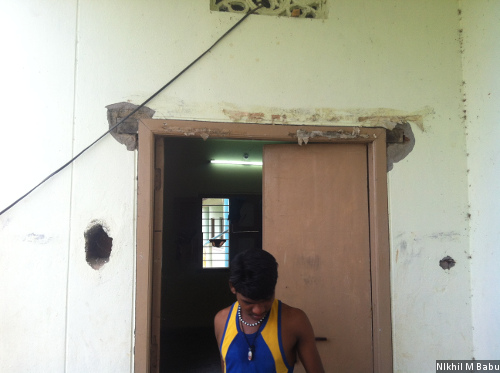 The walls of the government residential school in Gudur village in Nalgonda district, Telangana, have started cracking even though the structure is just three years old The building was constructed using Rs 47 lakh of the Tribal Sub Plan funds--set aside to improve the lives of scheduled tribes. Even as there was a 250% increase in the funds unspent during 2014-15 over the previous year, corruption is draining the money that should reach the poor.

The building was constructed using Rs 47 lakh of the TSP funds, but it doesn’t show. “The quality of work is pathetic. Often it’s others who enjoy the benefits of schemes drawn up for tribals,” said Vattam Upender, state president of Tuddum Debba, an adivasi organisation.

From school bags to mid-day meals, these schemes, drawn up for marginalised classes, are known to be marred by corruption. “The predominant suggestion which emerged in the interaction with the beneficiaries was the rampant corruption,” the erstwhile Planning Commission (now renamed NITI Aayog) said in a study on the impact of the SCSP and TSP.

Legislation needed to fix the problem

Three decades after they were started, there is still no central legislation to back the plans--a long pending demand.

“Bureaucrats say that it’s just a guideline and not a law. They use this to deny Dalits and tribals their due share,” said Beena J Pallickal, national coordinator of the National Campaign on Dalit Human Rights (NCDHR).

The plans are run on guidelines issued from time to time by the NITI Aayog. But given that the Aayog lacks muscle to enforce them, the guidelines are simply ignored.

Divakar believed that legislation will help hold officials accountable for the neglect of the funds. “It will then be binding on them,” he pointed out.

But efforts to initiate a bill have got nowhere. Pallickal recalls that a draft bill was prepared three years ago with inputs from the NCDHR and experts like PS Krishnan, 83, a retired IAS officer and former secretary to the Government of India who was behind the introduction of SCSP in 1980. “But that bill has been in cold storage ever since,” Pallickal said.

No data on where it all goes

IndiaSpend cross-checked Bihar's expenditure with documents obtained from NITI Aayog. Bihar spent zero money out of the funds in 1998-99 and 2001-02 despite being allocated Rs 628 crore and Rs 2,393 crore respectively, according to the Aayog.

IndiaSpend sent a detailed questionnaire to Bihar’s welfare department and followed this up with a reminder, but there was no response.

But Bihar is not the only truant state. An RTI response has revealed that NITI Aayog doesn’t have information on how Rs 3.1 lakh crore of the funds were spent over the years, mainly because states do not report to it.

Separate RTIs to states revealed that barring a few, none has complete details of expenditure. For instance, Kerala has data from 1976-2015 on allocation and expenditure of TSP funds. But Assam couldn’t provide any data prior to 2009-10.

Besides, there were inconsistencies between the expenditure data of NITI Aayog and states for the same year.

Though the funds are allocated in the budget, they are released very late in the financial year, leaving states with a very short window to spend them. For instance, in 2014-15, the Karnataka government made budgetary allocation for SCSP and TSP in the state budget in February.

But the meeting to release the funds was not chaired by the chief minister until October--a six-month delay. This left the ministry with only five months to spend the entire fund. An official at Karnataka’s social justice ministry confirmed this and blamed the situation on the low spending.

States get away with lax enforcement

When the Planning Commission was monitoring the schemes, states had to send their plans for approval. The Aayog has axed this procedure. “Now that states don’t need our prior approval, they don’t care to report expenditure. We send letters and reminders, but in vain,” said a senior Aayog official.

Krishnan was also of the view that the Aayog’s ability to monitor and enforce the use of these special funds has been seriously impacted. “NITI Aayog does not have teeth, the Planning Commission at least had some,” he said.

The government is now reconsidering its decision on NITI Aayog’s role as the monitoring agency for the strategies.

Two years ago, a NCDHR study found that successive governments had denied around Rs 5 lakh crore to Dalits and adivasis by not allocating funds proportionate to their populations. But even the reduced funds that are allocated to the plans are further diluted.

During the United Progressive Alliance (UPA) rule, the government had diverted its funds to Commonwealth Games. Later, it was revealed that the funds were used by the Delhi government to buy Diwali sweets.

In fact, even states such as Telangana, Andhra Pradesh and Karnataka that have passed legislations for proper implementation of SCSP and TSP, did not make adequate use of funds

The situation is not very different in Karnataka and Andhra Pradesh. “Though the bill was passed, no law has been made on it and the government is using that as a shield,” said Anjanayulu, former director of the Centre for Dalit Studies, Hyderabad, who has done extensive studies on the strategies. He added that the absence of a punishment clause and loopholes that allow funds to be used for general purposes are also hampering the schemes.

Need to relook strategies too

Experts, however, say that cash use is not the only problem with the plans. “We should look at the changes brought about at the ground level by the strategies rather than at the funds allocated,” said Krishnan.

The problem is too deep-rooted to be explained away with simplistic factors, said Krishnan. “People understand untouchability, people understand atrocities, but it took almost a generation for them to understand SCSP and TSP. Till they put pressure on political parties for funds, the situation is not going to improve.”