Unable To Get Drugs During Lockdown, Punjab’s Addicts Are Quitting. But This May Not Last

Chandigarh: Sukhwinder Singh started taking heroin after watching his friends do the same. This was two years ago when he was 33, and earned a living as a daily wager, either working as a farm hand or putting in labour under the Central government’s Mahatma Gandhi National Rural Employment Guarantee Scheme, in Kapurthala. Heroin, a 100-mg pack of which was sold for Rs 300-400 on the underground market, helped him endure the physical hardship of labour. When short on money to procure heroin, he would sell off household items like electronics.

Four months ago, when the state of Punjab went into a lockdown on March 23 to curb the spread of COVID-19, the supply of heroin, as of other drugs, gradually dried up. The prices shot up. “For a 100-mg pouch, I was asked to shell out Rs 10,000,” Singh told IndiaSpend over the phone from a de-addiction centre in Kapurthala. “I could not afford it. I could neither earn a daily wage, nor make money by selling household items due to the lockdown. The physical pain was unbearable without the drug. That made me join the rehabilitation treatment.”

Singh is among the 129,000 individuals who enrolled in 341 government and private de-addiction centres across Punjab over a span of 89 days, from March 23 to June 19, during the lockdown. The state government has claimed that these individuals constitute 24% of the 544,000 people who have sought de-addiction treatment in the state since 2017.

Doctors and social activists in the state believe the COVID-19-induced restrictions offer a golden opportunity for the administration to stem the state’s drug menace. “Movement restrictions have impacted drug supply, pushing addicts to seek treatment,” P.D. Garg, psychiatrist at Government Medical College, Amritsar, told IndiaSpend. “If this strictness in law enforcement is maintained, the state can do well in its de-addiction programme.”

Abuse of psychotropic drugs has been Punjab’s scourge for over two decades. The state, which shares a 553-km border with Pakistan, is a destination as well as a transit point for global opiate drug smuggling from Afghanistan, according to the United Nations Office on Drugs and Crime (UNODC). Peddlers rely on different methods to smuggle drugs, including concealing it in trade consignments, and transporting it by river and via underground tunnels.

Opium-based drugs such as heroin and poppy husk, cannabis and pharmaceutical sedatives are the most abused narcotics in the state, according to the Magnitude of Substance Abuse in India report, released in February 2019.

At 11,654 cases, Punjab recorded the second-highest number of cases registered under the Narcotic Drugs & Psychotropic Substances Act, 1985 (NDPS) in the country in 2018, according to the latest available data from the National Crime Records Bureau. These constituted about 19% of all such cases registered countrywide. 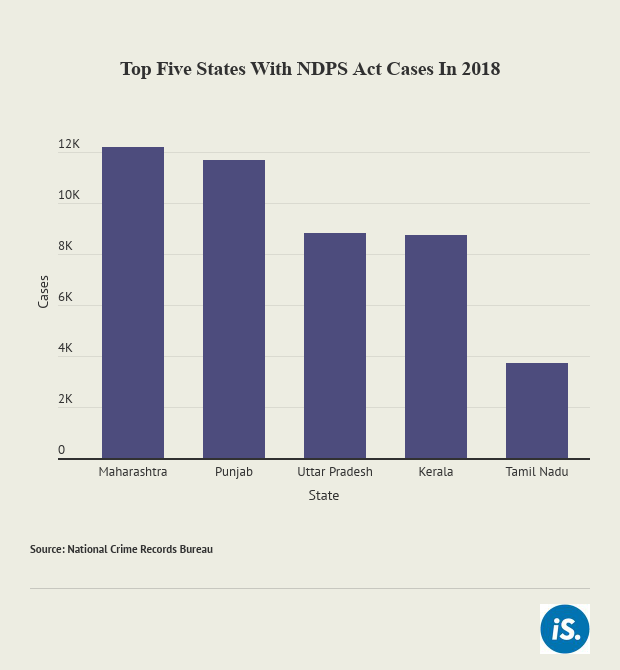 Drug addiction has affected every aspect of life in Punjab. It was one of the main issues during the 2017 legislative assembly election with the then opposition Congress and the Aam Aadmi Party promising action against the drug syndicates. When the Congress assumed power, the state government formed a special task force (STF) against drugs and opened 193 outpatient opioid-assistance treatment (OOAT) clinics across the state. The STF is mandated to ensure criminal prosecution of drug traffickers, rehabilitation of addicts and creation of mass awareness against drugs.

The state has also been focussing on rehabilitation instead of prosecution and imprisonment of drug addicts. Under the NDPS Act, individuals caught consuming or in possession of small quantities of narcotics can be offered immunity from prosecution if they opt for treatment.

The countrywide lockdown, which came into effect on March 25, put the brakes on the drug trade as police and other law enforcement officers enforced strict curfews and restricted movement across the country.

“The only good thing that has come out of COVID-19 is that the supply of heroin and other drugs has been broken. We are happy,” Chief Minister Capt Amarinder Singh said through a video conference on April 10.

In the absence of drugs, addicts develop physical reactions and symptoms such as severe body pains, vomiting, insomnia, diarrhoea and watery nose and eyes. The inability to deal with these symptoms forces them to seek treatment, to suppress the craving and to get rid of the pain.

This is how the lockdown enforcement unwittingly drove the addicts to seek help. “We received a call from policemen stationed in one of the villages informing us that hundreds of addicts had gathered there. They were desperate to get de-addiction therapy,” said Garg. “An ambulance was put into their service. Most new patients were young men addicted to heroin.”

“We had around 10,000 new patients at our centre during the lockdown,” Sandeep Bhola, in charge of Navkiran, a drug de-addiction and rehabilitation society that operates from the premises of the Civil Hospital at Kapurthala, told IndiaSpend. “Most were unable to afford the sky-high price of drugs and opted for treatment instead.”

Navkiran pressed a mobile van into service to make tours of 14 nearby villages in order to distribute de-addiction medicine. “This helped reach people who could not come to the centre due to curfew and ensured social distancing norms were complied with,” Bhola said.

The lack of drugs on the ground reflected in the cops’ paperwork. Cases registered under the NDPS Act across the state dropped by half, and the number of persons arrested declined by 39%. The police registered 854 cases and made 1,355 arrests between March 23 and May 28 this year, compared to 1,679 cases and 2,250 arrests in the same period in 2019, according to Sanjiv Kumar Rampal, a deputy inspector general in the special task force against drugs.

“We had succeeded in curbing the drug trade even before the lockdown and will continue to work towards strengthening the operations to seize narcotics,” Harpreet Singh Sidhu, who heads the STF against drugs, told IndiaSpend.

The STF’s task is far from done. Vigilante residents, who were manning check posts set up to prevent the spread of COVID-19 in several villages, aided in keeping an eye on drug peddlers, including on shady cops. For instance, in Mansa Kalan village of Bathinda district, villagers nabbed a constable along with three others who had come to collect drugs from a resident on April 4.

The police’s involvement in Punjab’s drug trade is well documented. In 2019, Jagdish Singh Bhola, a former deputy superintendent of police, was sentenced to 24 years’imprisonment for involvement in a multi-crore drug racket. The Punjab Police registered 114 criminal cases against 148 of its own personnel and initiated departmental inquiries against 61 others between April 2017 and April 30, 2020, for their alleged involvement in the drug trade. As many as 47 police personnel were dismissed and another 17 suspended in the same period.

Critics point out that the decreased number of NDPS cases and more addicts seeking treatment during the lockdown do not imply that the state has addressed the drug problem. “Drugs were still available during the lockdown to those who could pay the high price,” said Harpal Singh Cheema, leader of the opposition in the legislative assembly. “Most of those arrested are petty peddlers, not the drug lords who make money. The matter will not be resolved until the nexus between politicians, the police and the drug traders is broken.”

“While the health department rose to the occasion to deal with the unprecedented influx of patients, the state needs to do more to check the drug trade, which sustains thanks to the black sheep in the police force,” said Vineet Joshi, former state secretary of the Bharatiya Janata Party.

A combination of buprenorphine-naloxone tablets is given to patients addicted to opioids to help relieve withdrawal symptoms. However, patients can also get addicted to this medicine, which is why its use is advised only under medical supervision.

Punjab has experimented with different take-home dosages of these medicines, with addicts initially getting tablets for daily consumption and subsequently more tablets for weekly consumption. “Shorter duration dosage helps monitor the treatment better,” said Bhola. During the lockdown, however, the take-home dosage was increased to 21 days to minimise visits to hospitals and avoid possible transmission of COVID-19.

Doctors say addicts who get these medicines for free from government-run rehabilitation centres sometimes resell them at a higher price. Late last year, the state’s Food and Drug Administration found that nearly 70% of de-addiction tablets procured or dispensed by private de-addiction centres remained unaccounted for. A probe was ordered.

“The state is still under a partial curfew and the police are working hard to check the revival of the drug business,” Balbir Singh Sidhu, the state’s Minister for Health and Family Welfare, told IndiaSpend. “We will come up with new modalities in medical treatment to ensure that people who joined the de-addiction programme do not drop out.”

Bandi village sarpanch Singh considers the lockdown a blessing in disguise. “Many addicts are off the substance now and some who were unemployed earlier have also taken up daily wage labour work,” he said. “Only community support to families through village panchayats can deal with the drug menace and lockdown gave us a good opportunity to work on that.”

As Punjab opens up borders and relaxes movement restrictions, it now poses a greater risk of people falling back into addiction, and taking to drug peddling in the wake of economic uncertainty. The youth unemployment rate in Punjab was 21.6% in 2017-18, against the national average of 17.8%, as per the state’s latest Economic Survey (2019-20). The lockdown might likely have pushed more youngsters out of jobs.

An increasing number of people may resort to illicit activities to compensate for the loss of income and unemployment once restrictions are lifted, stated a report on COVID-19 and the drug supply chain by the UNODC. Many jobless people who cannot afford to buy drugs may get lured into the trade so that they can get their fix as part of the consignment.

“The state’s economy has been declining for the last three decades, first due to militancy and then due to Liberalisation in the 1990s which impacted the domestic industry,” R.S. Ghuman of the Centre for Research in Rural and Industrial Development in Chandigarh, told IndiaSpend. “The drug business expanded over the same period, offering a lucrative option to those who wanted to make big money. The current economic distress due to COVID-19 can give another fillip to the drug trade if not checked.”

(Moudgil is an independent journalist based in Chandigarh. Copy editing by Marisha Karwa.)