UDAN Will Make Air Travel Affordable For Many, But Not The Poor 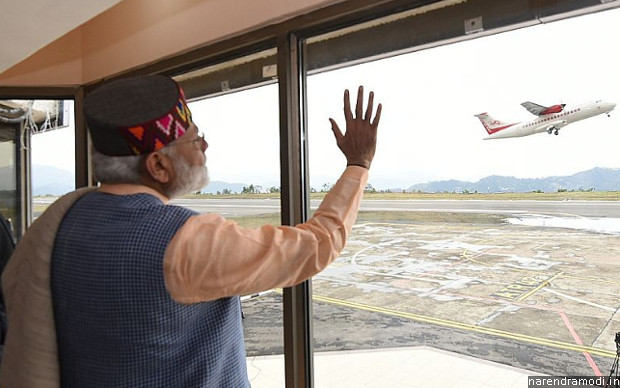 Launched on 27 April 2017, UDAN will feature flights to underserved smaller towns in which a certain number of seats will be subsidized--Rs 2,500 for an hour-long flight, and fares going up pro-rata for longer distances--according to a government press release. For instance, a subsidized Shimla to Delhi ticket for June 1 is presently priced at Rs 2,036, and will be operated by Alliance Air, an Air India subsidiary.

Prime Minister Narendra Modi promoted this as an opportunity for more people, especially the “common man,” to access air travel. “Why should air services be only for the elite in this country? I told my officials that I want people wearing hawai chappals [inexpensive flip-flops] to be taking flights,” he said at the April 27 launch.

But even at these low prices, a considerable part of the population is unlikely to use air services as claimed by the Prime Minister.

Although India has seen a massive decline in poverty over the last two decades, 21.9% of its population still lives below the poverty line of Rs 816 per person per month in rural areas, and Rs 1,000 per capita per month in urban areas, according to government data.

The cost of a one-hour flight is nearly as much as the average monthly per capita expenditure of Rs 2,629.65 in urban areas--where most airports are likely to be located--according to 2011-2012 data from the government’s National Sample Survey Office. The fare for non-subsidized tickets on the same flights could go as high as Rs 19,000, the Times of India reported.

In comparison, an air-conditioned (AC) bus operated by the Himachal Road Transport Corporation costs Rs 415 and takes 12 hours to reach Shimla from Delhi. There are no direct trains to Shimla--a regular berth in a train from Delhi to Kalka costs Rs 235, while an AC seat costs Rs 590, and the train takes about five hours. At Kalka, one needs to change trains, and Kalka to Shimla trains costs around Rs 300 and take another five hours.

“The biggest beneficiaries (of UDAN) will be businessmen and professionals in the interiors of India, who spend far more time and cost commuting to the big cities by road and rail,” Amber Dubey, partner and India head of aerospace and defence at the global consultancy KPMG, told IndiaSpend.

Dubey said there are millions of Indians who can afford to pay Rs 2,500 for a 500km flight. “Tourism too will get a boost. Many high-end tourists, especially the middle-aged, don't prefer a place that doesn't have convenient flight connections,” he added.

Affordable for many, but not the poor

On average, an Indian spent little--Rs 180 a month--in 2011-2012, including money spent on transporting personal goods to and from the place of work, leave travel, as well as money spent on vehicles they own (including animal-drawn vehicles), NSSO figures shows.

Through the UDAN programme, the government will subsidize a minimum of nine and a maximum of 40 seats on a flight. Underserved or unserved routes will be auctioned out, and the lowest bidder will win a monopoly over the sector for three years. In return, they would have to operate at least three flights a week on the route, and a maximum of seven. “Such support would be withdrawn after a three-year period, as by that time, the route is expected to become self-sustainable,” the government press release added.

For sectors that hold promise as future hubs of travel, but are not financially viable immediately, providing a fixed-period subsidy after choosing airlines through competitive bidding is absolutely justified, Dubey of KMPG said.

But analysts disagree on whether a subsidy for air travel makes economic sense.

Operating the programme is complicated, and depends heavily on coordination between the centre, state and the Airport Authority of India, said Mark Martin, founder of Martin Consulting, an aviation advisory firm.

“What if oil prices, which are relatively low currently, rise in the future?” he said, explaining that the cost of travel depends mostly on the cost of inputs like fuel, and the currency exchange rate, as most inputs used in air travel are imported. “Subsidies are fundamentally unsustainable,” Martin said, adding that given the variables, it may prove difficult to subsidize a sector even for three years.