Hyderabad: “We have walked the difficult path of these diseases and we survived. Our voices, our experiences, and our stories count. We are to be heard, we are to be listened to,” said Nandita Venkatesan, 29, a tuberculosis (TB) survivor, patient advocate and journalist, at the opening ceremony of the 50th Union World Conference on Lung Health in Hyderabad.

TB, an infectious air-borne bacterial disease that mostly impacts the lungs, affects more than 10 million people every year and caused the death of 1.2 million in 2018--more than HIV and malaria together--yet has mostly been a silent epidemic, resulting in no public outrage.

But now, survivors are increasingly vocal and visible as they seek access to better diagnostics, development of newer drugs, shorter treatment regimens and improved patient-centric care.

For the first time, survivors took active part in the Union World Conference, considered one of the most important conferences dedicated to TB and other lung diseases. Venkatesan’s speech was a statement at the first-ever Survivors Summit, held on the eve of the conference, on October, 29, 2019.

Minutes before, she had performed a shiva rudram in Bharatanatyam, a classical Indian dance, during the opening ceremony. Venkatesan has survived TB twice, once at 17 and then again at 23. The second time, she lost her hearing due to the side-effects of the drug kanamycin, used to treat multidrug-resistant TB (MDR-TB)--a TB strain resistant to at least two of the main TB drugs.

Venkatesan danced even though she could not hear the music, relying on number counts to perform. The crowd of over 4,000 delegates, including scientists, academicians, doctors and drug manufacturers from all over the world, gave her a standing ovation.

“We are not cases, we are not burdens, and we are more than just patients, we are people,” she said. The rest of the statement highlighted the need for survivors to be included in discussions on TB treatment and policy--they are the most affected by these decisions, she said, and know the disease intimately.

“I have been coming to this conference since 2012, there have never been so many survivors present at the Union conference,” said Anupama Srinivasan, deputy director of REACH, a non-profit working on TB.

“This is very important that conferences include patient and survivor's voices,” said Madhukar Pai, director of the McGill Global Health Programs at McGill University, Canada. Pai had highlighted that survivors were missing from the Union conference, and asked that the conference be held in low and middle income countries with a high number of TB cases, in a blog published on the website of Nature Research, a global journal.

India has the highest number of TB patients, accounting for more than 2.6 million of the 10 million patients globally. This was the first time the conference was held in India.

In India, quality of TB treatment is poor. Only 35% of TB cases in Mumbai and Patna between November 2014 and August 2015 were diagnosed and treated correctly by the private healthcare sector, which handles two-thirds of all TB patients, IndiaSpend reported in February 2018.

In 2018, an estimated half a million people contracted drug-resistant TB (DR-TB)--a more difficult to treat variant with a longer, more toxic treatment regimen--yet two in three did not start treatment for the disease, according to the 2019 Global TB Report.

DR-TB cure rates remain unacceptably low: 56% and 39% of people treated for MDR-TB and extensively drug-resistant TB (XDR-TB) were successfully cured, respectively, the report said. In XDR-TB, the TB bacilli becomes resistant to the second level of treatment for TB and to fluoroquinolones, a class of drugs used to treat MDR-TB.

In 2018, half of all new TB patients were not tested for rifampicin resistance, one of the primary drugs to treat TB, even though India has committed to drug susceptibility testing for all TB patients so that drug-resistant strains can be detected early. More than half (56%) of the drug-resistant TB cases estimated to exist in India remain undiagnosed, IndiaSpend reported in October, 2019.

Not just delayed diagnosis, TB patients often complain of how badly they are treated in the public health system. This is because most systems are not yet focussed on improving the quality of treatment, said Pai. “Not a single national TB programme is routinely collecting user experience. If you do ask, you are going to get a horror story because that is what you are getting now, one horror story after another,” he said.

It was only in September 2018 that the United Nations held its first ever high-level meeting on TB, asking country leaders to commit to specific milestones and to eliminating TB by 2022.

It was in May 2019 that TBpeople, a network of TB survivors, compiled the Declaration of the Rights of People Affected by Tuberculosis, reiterating the rights of people with TB and states’ responsibility to protect them.

“However did we get past the decade without this kind of document? This should have been a guiding star from the start but we are publishing it in 2019,” said Pai, at one of the talks during the conference. “This means we haven't been putting patients at the centre of treatment.”

Survivors are also asking for patient-centric research into TB drugs and treatment.

“A lot of us survivors are asking for a seat on the table,” said Venkatesan during a talk on the right to TB treatment and care. “We want scientists, researchers to not look at us as clinical trial participants to try out the drugs but to see us as active stakeholders in research. We can bring a lot of inputs for you,” she said. 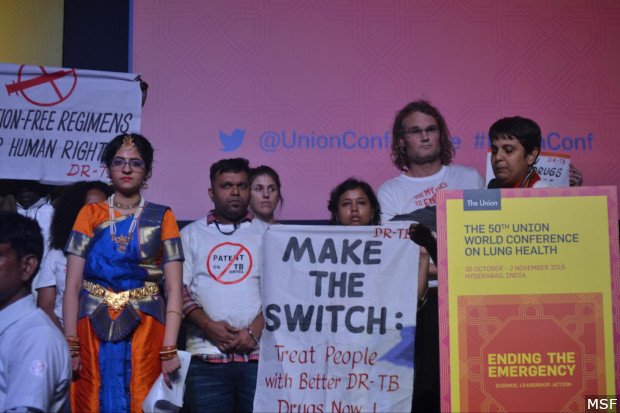 TB activists disrupt the opening ceremony of the 50th Union World Conference on Lung Health in Hyderabad, October 30, 2019. They stepped up on stage with placards and demanded reduced prices for TB drugs bedaquiline, delamanid and the newly-discovered pretomanid.

Unlike HIV (Human Immunodeficiency Virus) activists, who were better organised and successfully attracted attention through strategic protests and interruptions, TB groups have not been able to organise themselves and get the government’s attention, Vidya Krishnan, a journalist, wrote in the Journal of Clinical Tuberculosis and Other Mycobacterial Diseases in August 2019.

It was not until those who had contracted HIV educated and organised themselves that antiretroviral drugs became accessible and available, said Pai of McGill University in Canada.

It was partly due to efforts by survivors like Venkatesan, who spoke about how MDR-TB drugs made her deaf, and South Africa’s decision to discontinue the use of injectables as MDR-TB treatment, that the World Health Organization (WHO) updated its guidelines. It now recommends that MDR-TB patients be treated with fully oral drug regimens including bedaquiline and delamanid, the first new TB drugs discovered in 40 years.

But those who are diagnosed with DR-TB still get toxic drugs--injectables such as kanamycin, which can lead to hearing loss. Until September 2019, fewer than 5% of eligible DR-TB patients in India had received bedaquiline, and fewer than 200 patients had received delamanid.

In 2016, Shreya Tripathi, an 18-year-old XDR-TB patient, had to move the Supreme Court to get access to bedaquiline. Although she received the drug, it was too late--Tripathi died in 2018 due to extensive lung failure due to delayed treatment.

Many conference panels were disrupted by survivors and activists holding placards, including those from Médecins Sans Frontières (MSF) or Doctors without Borders, demanding a lower price for the new drugs bedaquiline, delamanid and the newly-discovered pretomanid. “Only 20% of people with DR-TB who need these newer drugs have been able to receive them,” MSF said in a statement.

The conference could have been organised to engage more meaningfully with the survivors, said Ganesh Acharya, an HIV and TB activist. “Our visas used to get rejected when The Union Conference was held in western countries [because TB patients were denied visas], so we thought it will be a great opportunity that the conference is held in India, but we were disappointed at how we were treated,” he said.

Some survivors who were invited to speak were asked to register independently and pay to attend the summit, he said.

Indian survivors and other academics found the registration fee for the conference--between Rs 27,000 and Rs 65,000--very high, as The Hindu Business Line reported on November 1, 2019.

Survivors said the ‘community connect’ space, where most of the civil society-led activities were held, kept the survivors away from the main activities, and did not have facilities such as washrooms and food stalls.

The space, a large tent with two rooms and a photo exhibit, was outside the main building of the Hyderabad International Convention Centre (HICC), the conference venue.

“Our goal for ‘Community Connect’ is to make it as large a space as possible, while still making it accessible by everyone, regardless if they have conference badges or not,” said Meaghan Derynck, The Union’s spokesperson, on email.

“Given the space available at HICC, and having seen a similar setup used by a previous conference at HICC, it was determined that having a large, vibrant, outdoor space just outside the main entrance of the HICC was the best available option to meet all the goals of the space. Had it been within the HICC, the space available would have been much smaller and less interactive,” Derynck said.

About 30 survivors participated in the first ever Survivors Summit, held a day before the official conference. Many groups said the number was low because a call for applications for the summit was sent out on September 25, 2019, just a month before the conference, leaving little time to make travel and other logistical arrangements.

“We would have loved to attend the survivors’ summit but I found out about this only 3-4 days before the conference actually began,” said Meera Yadav, an MDR-TB survivor and patient advocate.

The announcement could be made only after September 25 as there was no funding for it until then, Derynck said.

“The Survivors Summit was kept hush-hush, no one knew what is the agenda or who is organising it,” said Acharya.

The Union recommended that TBpeople, the TB survivors’ network, convene a community coordinating committee for the summit to decide the agenda. “The Union led on the logistics for the Summit, but the content was the responsibility of the committee,” Derynck said.

It is understandable that survivors feel impatient, said Srinivasan, as the efforts to bring in survivors and the community are moving incrementally. “We have seen tremendous change. Is it enough? No. Should we push for it to be faster? Of course, we must.”

(Yadavar is special correspondent with IndiaSpend).