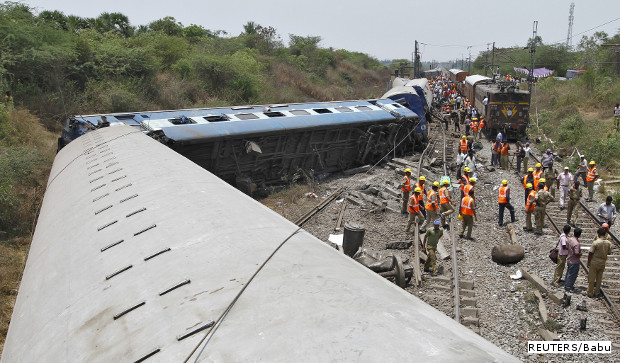 When the Bangalore-City-Ernakulam Intercity Express smashed into a rock and derailed on February 13, killing 11 passengers and injuring more than 100, it was the latest of more than 400 train accidents over five years (up to June 2014).

These figures do not include accidents at unmanned level crossings. Take those into account and the National Crime Records Bureau (NCRB), a division of the Home Ministry, reported 27,765 accidents just for 2013.

The data vary, depending on which government department released them. IndiaSpend has earlier reported that more than 36,000 people died over the past decade based on data from the Ministry of Statistics and Programme Implementation.

Let us look at the zone-wise number of train accidents for the past five years, as reported to the Lok Sabha.

Let us now look at deaths and injuries due to train accidents.

South-western zone with 28 fatalities reported the maximum deaths in 2013-14. Central zone with 90 injury cases in 2013-14 was ranked first, totalling 164 in the past three years.

The railways paid Rs 5.11 crore as compensation for death and injury in 2011-12, a figure that has steadily fallen.