Toxic Air Is Now A Year-Round Problem For Delhi

Mumbai: Delhi’s toxic air is no longer limited to winters.

While Delhi is experiencing high levels of air pollution largely caused by a dust storm hitting western India, high 24-hour average levels of PM 2.5 have been recorded across the National Capital Region (NCR) between March and May 2018, an IndiaSpend analysis of CPCB data shows.

This indicates that poor air quality is a problem consistently affecting the region, beyond winter and individual weather events.

Air quality in Delhi is now at ‘hazardous’ levels, with areas in the national capital registering an air quality index value--a composite measure of ozone, nitrogen dioxide, sulphur dioxide and particulate pollution--of 999 on June 13, 2018, according to the World Air Quality Index.

The Central Pollution Control Board’s (CPCB) air quality index is currently registering ‘severe’ air pollution across the city, with 24-hour average levels of PM 2.5--fine particulate matter 30 times finer than a human hair, which are known to pose the greatest risk to humans--over 250 microgram per cubic metre (µg/m³) of air.

Levels this high may cause “respiratory impact even on healthy people, and serious health impacts on people with lung/heart disease. The health impacts may be experienced even during “light physical activity”. 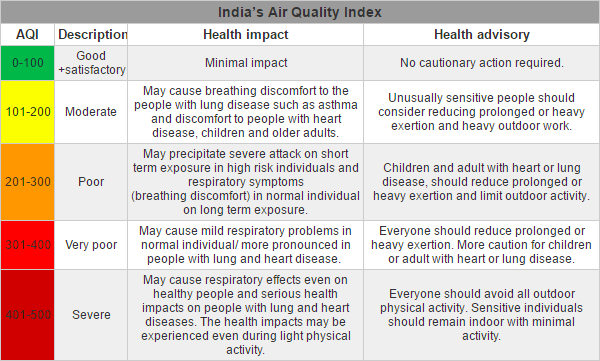 Source: Indian Institute of Tropical Meteorology & Ahmedabad AIR plan
Note: Each of the AQI categories are decided based on ambient concentration values of air pollutants and their likely health impacts (known as health breakpoints). The eight pollutants measured are PM 10, PM 2.5, NO2, SO2, CO, O3, NH3, and Pb for which short-term (upto 24-hours) National Ambient Air Quality Standards are prescribed.

In November 2017, a public health emergency was declared by the Indian Medical Association (IMA) in Delhi as air quality index breached 999, likened to smoking 50 cigarettes a day.

High levels of PM 2.5 beyond the winter

Delhi experienced zero days of ‘good’ quality air between March and May 2018, according to AQI values from data compiled by the CPCB’s monthly air ambience reports (for March, April and May).

Two days of ‘good’ quality air were recorded in Alwar, 160 km south of Delhi and part of Delhi-NCR.

PM 2.5, as we said, poses the greatest risk to humans. The particles can be inhaled deep into the lungs, causing heart attacks, strokes, lung cancer and respiratory diseases. Their measurement is considered to be the best indicator of the level of health risks from air pollution, according to the World Health Organization.

Source: Central Pollution Control Board: Ambient Air Quality Data of Delhi-NCR Reports for for March, April and May 2018

The WHO standard for permissible levels of PM 2.5 in the air (24-hour average) is 25 μg/m3, while India’s National Ambient Air Quality standard is 2.4 times higher at 60 μg/m3.

Even brief exposure to PM 2.5 has been linked to a higher risk of early death among the elderly, according to a study by the Harvard TH Chan School of Public Health at Harvard University.

Air pollution levels in India’s capital of Delhi can be up to 30x higher than WHO guidelines. Yet not a single case was filed against industries exceeding pollutant quotas between 2014 and 2016. https://t.co/KrspjahQxj pic.twitter.com/4YdcRPCtI4

Pollution linked to boundary conditions--burning of fossil fuels, seasonal fires, dust events and other natural sources--is currently the top contributing factor to poor air quality, according to UrbanEmissions.info, a pollution research and analysis site. This is followed by pollution from passenger vehicles including exhaust emissions and associated suspended dust.

In 2015, 2.5 million of 10.3 million deaths in India due to non-communicable diseases (NCDs) were linked to pollution making it the country with the highest number of pollution-related deaths, followed by China, IndiaSpend reported on January 3, 2018.

To curb dangerous levels of air pollution seen in 2016, the ministry of environment, forests and climate change introduced the Graded Response Action Plan (GRAP) in January 2017.

Upon reaching AQI readings above 200, the government is mandated to authorise actions that will inhibit the worsening of the situation and avoid ‘emergency’ levels. Actions include capping emissions from thermal power plants, banning open burning of firewood and coal for heating and cooking and a ban on the use of diesel gensets.

Such recommended measures are consistently mentioned in the CPCB’s monthly air-ambience reports, though it is difficult to determine which, if any, have been carried out.

“Implementation of action plans and the need to control air pollution is a debate largely reserved for the winters, during emergency-like situations most measures tend to be in place--for example closing of schools,” said Aishwarya Sudhir, an independent researcher, told IndiaSpend.

“But when it comes to summer-time pollution, despite having air quality forecasts and predictions in place, I don’t see any precautionary planning or announcements on the recommended emergency response measures,” Sudhir said.

As AQI readings dip from moderate to poor levels, the government is supposed to send alerts via social media and mobile apps warning of high pollution levels and the associated health risks, according to the GRAP.

Despite Delhi’s air quality 10-12 times above safe limits set by the World Health Organization (WHO), the government failed to activate the emergency air-quality warning system, raising questions about the efficacy of the GRAP system, IndiaSpend reported on November 9, 2017.

(Sanghera, a graduate of King's College, London, is an intern with IndiaSpend.)