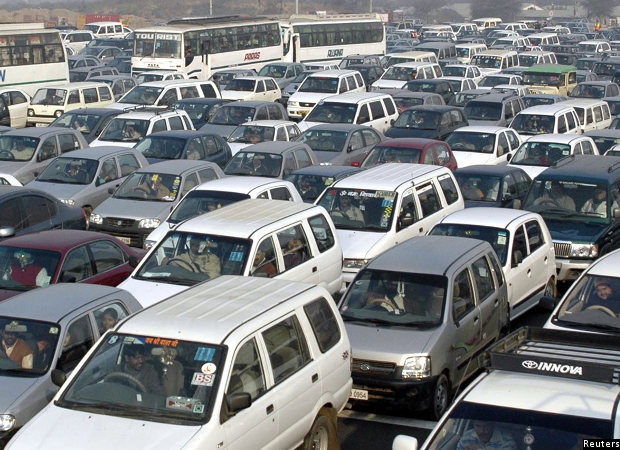 This winter, Delhi’s government and the judiciary have implemented several policies aimed at cutting Delhi’s air pollution. The just-concluded odd-even scheme in the city required motorists to find alternative means of transportation every other day. Car-free days, first in Gurgaon and then in Delhi, appeared to cause a temporary dip in pollution levels. The night hours when trucks can pass through Delhi have been reduced, and the National Green Tribunal has issued a direction to lower truck traffic coming into the city at night by levying an additional entrance fee.

On some days the air may be clearer. But what remains hazy is where Delhi’s air pollution comes from. Over the years, multiple attempts to find out–-called source apportionment studies--have yielded contradictory results. There are numerous suspects: cars and trucks, smokestacks, farm fires in Punjab and Haryana, and dust from construction sites to name just a few. Without a better knowledge of the portion contributed by different sources, any policy response, no matter how bold, will be a little like a blind attempt to pin the tail on the donkey.

But that may be changing. The Indian Institute of Technology (IIT) Kanpur has now released a major study, commissioned by the Delhi environment department in 2011. This promises to give the clearest picture of source apportionment yet. And other new sources of quality information on air pollution are appearing: the government has plans to add 10 new air quality monitoring stations in Delhi, and news outlets are setting up their own monitoring systems, including IndiaSpend #Breathe.

This could be a turning point in our understanding of the sources of Delhi’s deadly air, as well as our ability to craft smart policies that shut them down. We at Evidence for Policy Design (EPoD) are researchers who assist government ministries in formulating such responses. We think that at a time like this--a critical convergence of public concern, policymaker attention, and academic contribution--it’s worth taking stock of what we know now and how we came to know it. That clarity will make it easier to guide the discussion toward a policy response that will stick.

Search out the source

Over the past 10 years and excluding the just completed IIT Kanpur Study, we count 15 source apportionment studies that sought to pinpoint the sources of emissions and their respective contributions to Delhi’s overall air pollution. Ten are based on direct sampling; the other five rely on dispersion models. While the main sources identified are similar across studies, the relative weights placed on different sources by these studies vary dramatically. This underscores both the difficulty of conducting them and the wide range in quality of the studies currently available. 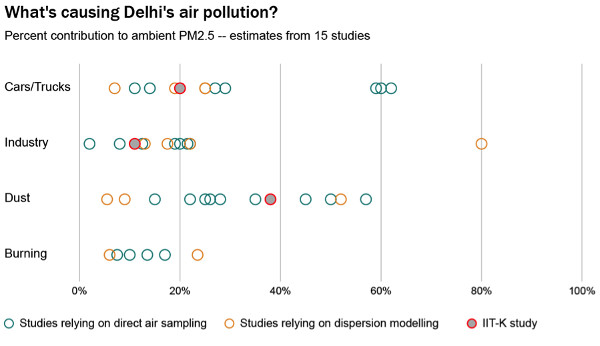 Note: the methodology followed by the IIT-Kanpur study is not yet available to the public. For analysis, click here.

Getting a reliable picture of air pollution is inherently difficult due to Delhi’s changing weather conditions and constantly shifting patterns of emissions throughout the day, week, and year. Moreover, some of the most important pollution sources lie outside the National Capital Region. This makes it important that direct air sampling studies are broad enough to capture multiple sources and take samples at several different time points. An inability to do this--largely due to budgetary considerations--and the resulting differences in what gets sampled are an important part of the explanation for the large differences across studies.

In such situations, secondary data-based modelling may well be the best option for source apportionment studies, as long as these secondary sources are reliable and span relevant emission sources. Right now, we lack a measure of whether that is the case. Without standardised best practices about which secondary data sources and which models to use, source apportionment studies will continue to give conflicting results going forward.

So we not only lack the best information on pollution, we also lack consensus on how to determine the second best. In tomorrow’s continuation of this article, we will describe how findings from the new IIT Kanpur study fit into that data hierarchy, and the other information systems needed to create a policy response that will clear Delhi’s deadly air.

This is the updated version of an earlier story.