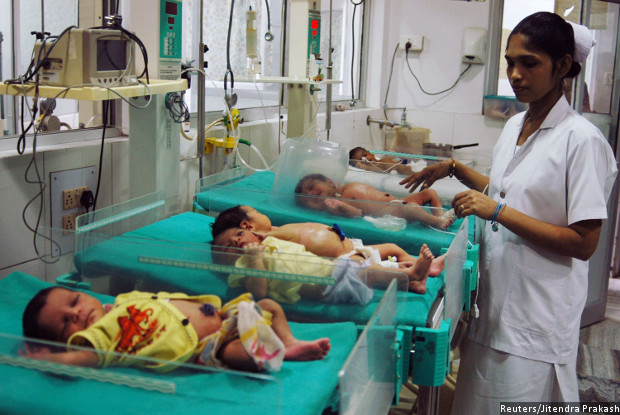 From 1.2 billion people in 2011, India is on course to become the world's most populous country with 1.6 billion by 2050. If India has to curb its population growth, a higher survival rate for its children is an important factor, our analysis of government data indicates.

In other words, if more children survive, women tend to have fewer children, which increases their chances of living longer. In some states, however, if that correlation is not apparent, female education is correlated with fewer children and higher survival rates for those children.

Over 42 years, there was a 55% reduction in India's total fertility rate (TFR)--the average number of children born to a woman of child-bearing age--from 5.2 in 1971 to 2.3 in 2013, according to family and health statistics 2015, released by the ministry of health.

The reduction in TFR is influenced by declining infant mortality rate (IMR)--the number of babies who die before their first birthday for every 1,000 live births--which declined from 129 to 40 between 1971 and 2013.

The national population policy of 2000 aimed to reduce the TFR to 2.1 by 2010. While that target has not been achieved, falling infant mortality has been a leading factor behind the decline in fertility in India.

Lower fertility tends to cause further declines in mortality, as families can devote more resources to each child, according to this study by Harvard University in 2011.

More babies tend to die in states where women have more babies, the data reveal.

This shows that infant mortality may impact fertility to some extent. Other factors that affect fertility rates are education, availability of health services and access to and awareness of birth control.

Literacy in women is correlated with late marriage and better access to contraception, thus stabilising population. Educated women have better social standing and ensure better nutrition and immunisation, improving child health and survival, according to this 2000 study from the London School of Economics by Jean Dreze.