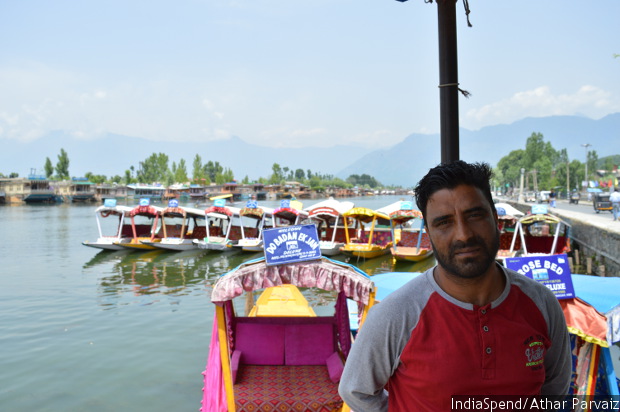 Rizwan Ahmad Bhat, standing near his Shikara (boat) at Dal Lake in Srinagar. His Shikara hardly gets any visitors this summer. Until July 2016, nearly 1.3 million tourists had poured into Kashmir over the year. This year, at the height of the tourist season, only a few thousand arrivals have been recorded.

At the Dal Lake in Srinagar, Rizwan Ahmad Bhat stands next to his shikara (a traditional boat), named Do Badan Ek Jan (two bodies, one soul), waiting for tourists. Last year this time, the lake was packed with visitors exploring its waters and the views of the surrounding Zabarwan hills.

This summer, the lake and its shores are empty of tourists and the smartly-dressed boatman is upset. “Look at our empty boats,” said Bhat, 31. “We have nobody to take on a ride.”

Half-a-dozen other boatmen, dressed in T-shirts and jeans, stood around, listening to the conversation. They complained that the media is scaring tourists away from Kashmir. “When people watch TV, they think Kashmir is burning and we should not go there,” said one of them, and others agreed.

Until July 2016, when young militant leader Burhan Wani’s killing sparked a prolonged chain of violence in the Valley, Bhat and other boatmen used to earn Rs 1,000-Rs 1,500 a day. Now they count themselves lucky if they make Rs 400 a day.

It is the same story at Ali Shah Carpets on Saida Kadal Road, 7 km off Srinagar’s city centre. Unsold rugs and shawls worth crores of rupees are piling up to the dismay of general manager Rafiq Ahmad Shah. “Tourism is a flop this year, so is our production,” he said. Orders were given to artisans in winter for summer sales as no one had foreseen crisis.

The ebbs and flows of violence and tourism

Tourism is important for Jammu and Kashmir’s economy, contributing 8% to the state’s gross domestic product. In 2016, the state had recorded 1,299,112 (1.299 million) tourists. The sector employs over 100,000 people, directly and indirectly, according to approximate industry estimates. 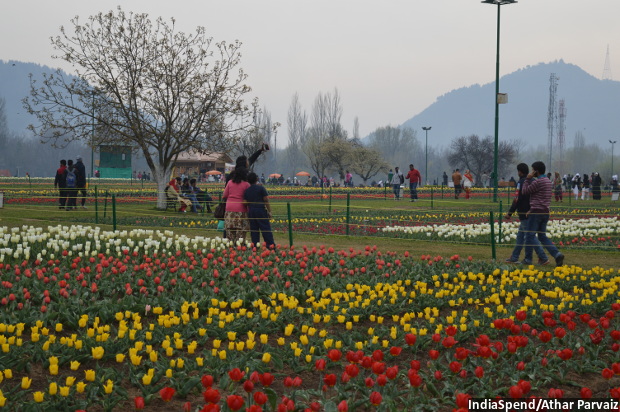 The 33-hectare Tulip Garden in Srinagar is the new addition to Kashmir's tourism spots since 2008. However, in recent months, after the national media have been swamped with stories of violence in the Valley, tourist arrivals declined.

But tourism is also highly sensitive to issues of law and order. In recent months, the national media have been swamped with stories of violence in the Valley and between April and early June this year, only a few thousand tourists arrived, said tourism officials who did not wish to be named.

The Valley has seen a decline in insurgency-related violence in recent years but there has been a rise in street violence, mostly stone-pelting, as IndiaSpend reported on May 30, 2017. Tour operators and tourism officials argue that this violence is too sporadic and localised to affect travellers.

For tourists, however, any trouble, big or small, is avoidable. Bengaluru resident Badri Raghavan scrapped a long-awaited Kashmir vacation with his wife and three children in June 2017 though the cancellation cost was steep. The family’s plans had included a houseboat stint on the Nageen lake in Srinagar and homestay in Sonamarg.

“The tour operator insisted that it is safe but if I have all of seven days in hand for a vacation why would I spend it looking over my shoulders all the time?” said Raghavan.

Tourism figures for the Valley have had a direct link with its law- and-order situation. Kashmir was a strong favourite among national and international tourists until 1988, with over 700,000 arrivals. But in 1989, armed violence began in the Valley and the numbers dropped by 200,000. That year, there were 1,500 violent incidents which included bomb blasts and firing.

In 1995, violence eased in the Valley and in early 1996, assembly elections were conducted after eight years of governor’s rule. With a civilian government in place, tourist confidence too returned. In 1998, over 100,000 visitors arrived in Kashmir.

Four years later, India and Pakistan were at the brink of war following the December 13, 2001 attack on Parliament. Assembly elections held in the same year in Jammu and Kashmir in September were also marred by violence. Consequently, tourist inflow declined sharply in 2002, falling to 27,356.

With the start of the India-Pakistan peace process in 2003, and up until 2012, tourist figures climbed steadily to over 1.3 million. In 2015, the numbers fell below 1 million, but this time because floods had devastated Kashmir in September the previous year, affecting its tourism infrastructure badly.

Two top sales officials at two leading Srinagar hotels, who requested anonymity, said April-June occupancy is down by 70-80% this year compared to 2016.

“From April to June last year, we had no vacancies at all given the huge influx of tourists,” said one of the hotel officials, requesting anonymity. “But this year, we have just managed 25% occupancy. It is because of the fear psychosis being created about Kashmir, especially by TV channels.”

Currently, only 15 of 80 rooms in his hotel have guests staying in them.

In recent years, media portrayal of events as well as non-events in Kashmir have become a serious concern for Kashmiris, especially for those who rely on tourism and related activities.

“In a place like Kashmir, tourism inflow is often dependent on peace. But the media reportage about Kashmir is disrupting tourism by creating a false narrative about the situation in Kashmir,” Mahmood Ahmad Shah, director-tourism, Kashmir, told IndiaSpend. “In winter itself, TV channels were predicting the start of a bloody summer in March.”

Most early bookings were cancelled last year and there were hardly any new bookings this year, according to one of the two hotel officials IndiaSpend spoke to.

Tour operators also accused the media of prompting a Kashmir “boycott”. “Messages like ‘avoid travelling to a place where Indian flags are burnt’ were being circulated on WhatsApp group (sic). Who would dare to come now?” Farooq Kuthoo, secretary-general of the Travel Agents Association of Kashmir, was quoted as saying in The Hindu on July 6, 2017. The newspaper went on to quote a Gujarati student activist Rimmi Vaghela: “There is a concerted effort to shoo away Gujaratis from travelling to Kashmir this year online. Besides the social media, the vernacular press in Gujarat plays up the incidents of violence like never before.”

Boycott Kashmir is what some right wing groups in India want in this hot weather across India.

At a recent leadership training session for academics at the Kashmir University, the trainer asked an academic from Rajasthan for the first word she associates with Kashmir. ‘Militancy’ was the answer. For the Kashmiri academics in the classroom, this seemed like a reflection on how Kashmir is portrayed in the media, an assistant professor later said.

“We are the victims of media propaganda,” said Abdul Hamid the manager of a hotel in north Srinagar. “A stone-pelting incident takes place somewhere, someday in Kashmir and it is shown repeatedly on TV for days together as participants on talk shows keep debating stone-pelting and militancy in Kashmir. This is creating a negative message about Kashmir.” Only three of the hotel’s 14 rooms had guests.

Either unemployment or wage cut for workers

The tourism crisis has affected workers more than owners, said Hamid. “Hotel owners at least get tax rebates when the tourism industry suffers, but most workers are either laid off or have their salaries slashed up to more than 50%,” he said.

In his late 20s, Shabir Ahmad from Tangmarg (Baramullah), was employed as a service boy by a Srinagar hotel in March 2015. He was asked to either accept a 60% wage cut or leave. “I preferred to stay as I have no other skill,” said Ahmad. “Now, I and other employees are just hoping that the tourist inflow to valley improves.”

Many countries including US, UK, Germany and France issued travel advisories against Kashmir.

“We used to love dealing with foreign tourists because they stay for days and weeks together,” said Tariq Ahmad Patloo, a houseboat owner at Dal Lake pointing to the pages of his old log books at his houseboat New Sea Palace. “Now, our houseboat gets just three-four foreign tourists a year.” 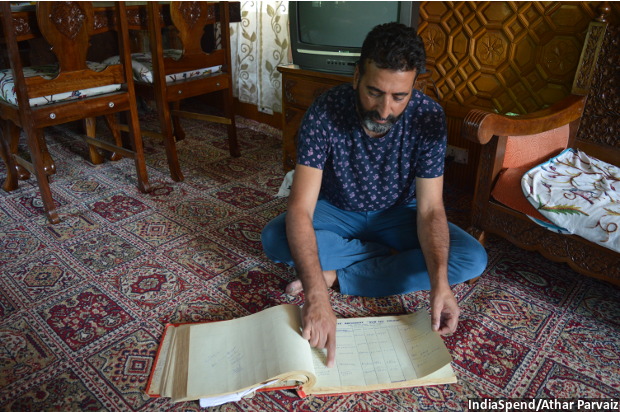 Tariq Ahmad Patloo showing the entries of foreign guests during 1980s from an old log book of his house-boat New Sea Palace.

Between 1990 and 2005, the number of foreigners travelling to Kashmir remained way under 20,000. It witnessed a steady increase after an improvement in the security situation across Kashmir.