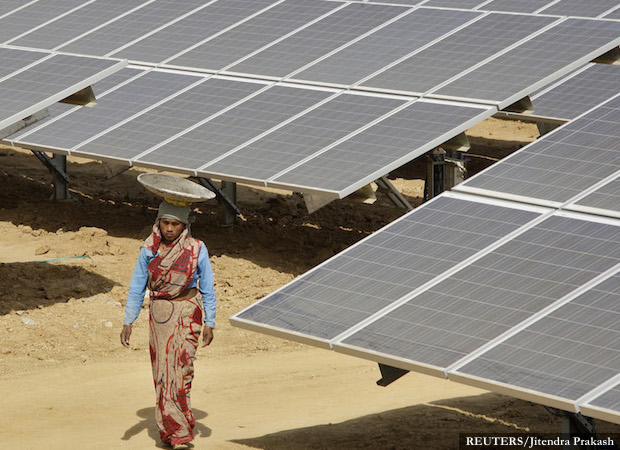 Over 300,000 Indians could find jobs in the wind and solar industry over the next five years if the country works towards its 2022 target of 160 GW.

Currently, wind and solar together account for almost 14% of India’s installed power

Over the next three years alone, the sector can generate jobs for about 80,000 Indians.

The industry employed over 21,000 people in India in 2016-2017 and is expected to employ an estimated 25,000 people more in 2017-18, according to an analysis by the Council on Energy, Environment and Water (CEEW), a not-for-profit research organisation based in New Delhi, and the Natural Resources Defense Council (NRDC), a nonprofit.

About 64% of India’s population is expected to be in the working age-group of 15-59 years by 2026, according to Ernst and Young, a professional services consultancy. It is also likely to have the world’s largest workforce in the world by 2025. The green sector, with its employment potential, could absorb a significant chunk.

NOTE: The estimates for the workforce required to meet India’s solar and wind energy installation targets of 100 GW and 60 GW respectively were based on primary data collected from multiple organisations: 37 solar companies, 8 solar manufacturers and 9 wind companies were respondents to the survey. The analysis only included direct jobs and a few indirect ones such as manufacturing. It did not include induced jobs such as those created when employees spend their wages. It also did not include indirect jobs like those in the finance, banking or data analytics sectors since these were not specific to solar and wind.

India, one among top four job markets in renewables sector

In 2016, India accounted for 5% of the world’s renewable-energy capacity, and invested $9.7 billion (Rs 64,990 crore) in the sector, according to the Renewables Global Status Report 2017, released by REN 21, an international non-profit working on renewable energy.

Jobs continued to shift towards Asian countries, which together accounted for 62% of jobs in 2016, compared to 50% in 2013, according to the International Renewable Energy Agency (IRENA), a global intergovernmental organisation. 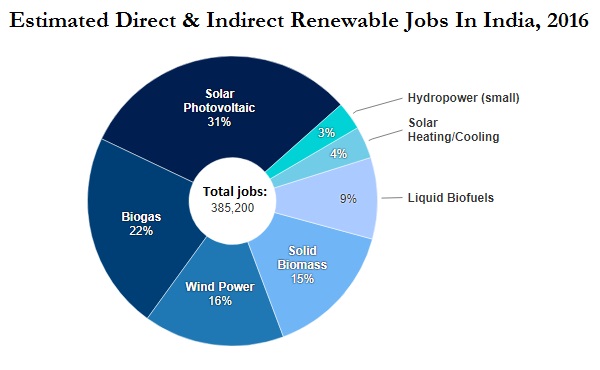 NOTE: Total does not include jobs in large (over 10 Megawatt) hydropower projects; jobs generated in geothermal and concentrated solar power sectors are zero.

Rooftop solar industry is most labour-intensive

Of the more than 300,000 workers identified in the CEEW-NRDC analysis, 237,980, or about two-thirds, are likely to work in rooftop solar and the rest in ground-mounted solar and wind industries.

Rooftop solar was found to be more labour-intensive than other renewables, providing 24.72 job-years per megawatt (MW, a unit of power). Ground-mounted solar projects can provide 3.45 job-years per MW and wind power 1.27 job-years per MW. One job-year implies full-time employment for one person for a year.

However, capacity addition in rooftop solar has been slow to take off, IndiaSpend reported in January 2017.

Patchy implementation of net metering (a two-way billing system that credits solar system owners for the electricity they add to the grid, charging them for net consumption) is one of the major reasons for low consumer uptake of rooftop solar in India, according to a 2016 analysis by Bridge to India, a consultancy and knowledge service provider. This and the absence of policy reforms to ensure efficient net metering is a dampener for the sector.

“The government has shown a very strong desire to drive growth in this (rooftop solar) sector. It is already offering a generous mix of capital subsidies, tax incentives and cheaper debt financing schemes for the sector...All these efforts will fail to produce the desired results unless net-metering policy framework is urgently reformed. International examples show that effective net-metering implementation can increase rooftop solar adoption by as much as 50%,” the analysis said.

“An existing gap and ongoing challenge within India’s workforce is the lack of employees trained with the skills needed to construct and operate solar plants. This skill gap is increasingly recognized as a barrier to realising the country’s renewable energy target,” a 2015 report by CEEW and NRDC said.

The CEEW-NRDC study also estimated that 45,000 additional jobs could be created through solar module manufacturing if the country meets its demand for the product domestically.

However, in 2016, local manufacturers struggled in the face of cheap imports while Chinese firms supplied an estimated 80% of the total requirement. Indian firms accounted for no more than 13% of supply, according to a 2017 report by IRENA.

In July 2017, India began an investigation into the dumping of solar cells and modules from China, Taiwan and Malaysia. Dumping is when a country exports goods at prices cheaper than domestic rates.

The Indian Solar Manufacturers Association has also asked the Directorate General of Safeguards to consider a safeguard duty on solar cells and modules, according to a report by Bridge to India.

However, the report did not advocate safeguard duties. There is “little upside to imposition of anti-dumping or safeguard duties on solar cells and modules. There is no evidence from other countries of such duties resulting in any long-lasting benefits for domestic manufacturers. At the same time, any duties raise the risk of side-tracking India’s solar capacity addition target affecting more than 10,000 MW of project pipeline,” it said.

How To Generate Green Sector Jobs